Short articles, YouTube videos, blogs or posts found on the internet or posted on the LSAA Facebook page. (in random order)

If any LSAA member has an article or notices something of interest they could email a link and/or text to blogger @ LSAA.org (no spaces)

The SergeFerrari Group announces the acquisition of Verseidag-Indutex thus strengthing its global leader position in Tensile Architecture and Modular Structures and becoming a key player in non-combustible solutions.

See the Press Release by SergeFerrari 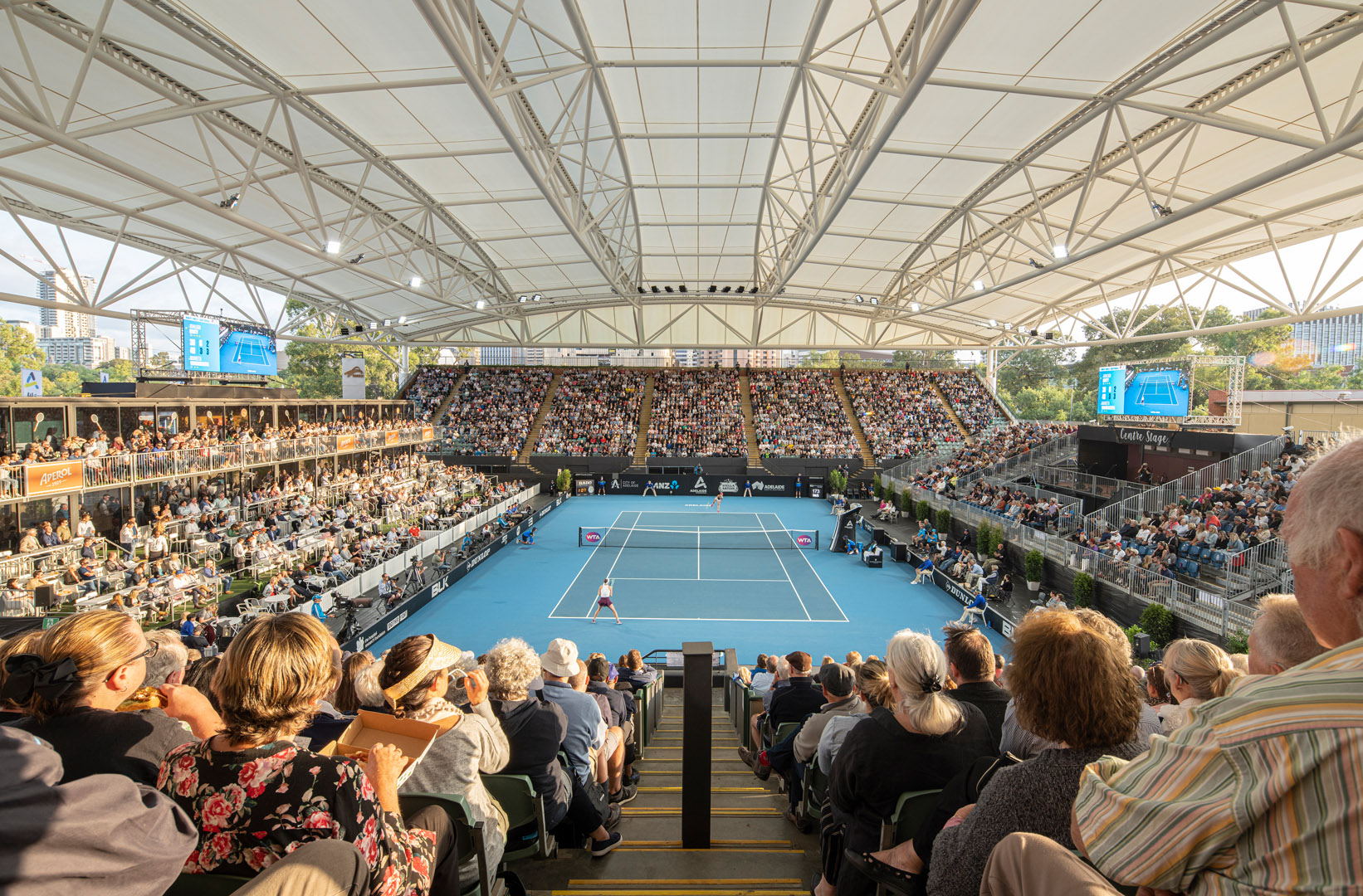 The internationally sanctioned men’s and women’s tennis tournament will be played under the centre courts new canopy – being designed by COX Architecture.
The canopy, which spans 80 metres in length and covers the two existing grandstands and court areas, was highlighted by Premier Steven Marshall as a decisive factor in Adelaide securing the high-profile sporting event and reinstates Memorial Drive as a world-class tennis venue.
Tennis Australia Chief Executive Office Craig Tiley believes ‘now that we’ve got the roof’ more high-profile tennis tournaments will be seen in Adelaide.
This new canopy adds to COX-led redevelopments made to the Memorial Drive tennis precinct in 2017.
The Anchor project added a new sunken outdoor show court, new match courts and a clay court centre of excellence.Minister for Trade, Tourism and Investment David Ridgway said, ‘the newly developed precinct will allow fans to get up close to the action which will take the spectator experience to a whole new level.’
The Adelaide International is a week-long tournament held in January and will serve as a lead-in to the Australian Open.The canopy is currently under construction and will be completed in time for the 2020 tournament.
For more details - see https://www.coxarchitecture.com.au/new-canopy-adelaide-international-tennis-memorial-drive/
Leave your feedback!

North Queensland Stadium construction progress, Townsville. From the video you can see what a great location it is relative the city centre.

The progress fly through of Al Bayt Stadium that featured at our 2018 conference. The cladding is nearing completion and the bespoke patterned fabric roof soffit is impressive. Click on the blank image below.

LSAA member Tensys have been developing tensile aviary structures for the Mandai Project, as part of the ever expanding eco-precinct in Singapore. If you haven't been before the highlight is the Night Safari.

About This Website
YOUTUBE.COM
Mandai Project - A Rejuvenated Mandai
The rejuvenation of Mandai will involve the integration of the existing River Safari, Night Safari and Singapore Zoo with upcoming new attractions - includin...
Leave your feedback!

This morning at Lisson Gallery #AnishKapoor announced his first large-scale solo exhibition in China. Kapoor will open a solo show across the Central Academy of...

About This Website
BBC.COM
Making a better future
Will robots, drones and smart diggers create our future homes and workplaces?
Leave your feedback!

About This Website
BBC.COM
Making a better future
Will robots, drones and smart diggers create our future homes and workplaces?
Leave your feedback!

An experimental temporary structure "TemporActive" was constructed as part of Tensinet's latest symposium in Italy. A single skin form with cable stiffended ribs.

Google HQ under construction. A steel frame diagrid with a tension form supported by columns at the high points. Also recommend checking out BIG's page for some context https://big.dk/#projects-gce

About This Website
YOUTUBE.COM
Movie shows BIG and Heatherwick's Google HQ taking shape
Google's new California headquarters, designed by the studios of Bjarke Ingels and Thomas Heatherwick, is captured in this aerial footage by The 111th that s...
Leave your feedback!

The Centaur Pod is the result of a research project between Arup and UNSW. It is a kinematic folded plate structure that defines an internal space such as a meeting room and can change form based on the changing environment or need. The mechanism is powered pneumatically.

Click on the blank image to go to a page on the ARUP website
ARUP.COM
Centaur Pod - Arup
The ‘Centaur Pod’ prototype seeks to challenge a static built environment. The result of a Research project between Arup and the University of New South Wales (UNSW) in Sydney, it’s an origami inspired meeting room that can expand and contract in response to its surroundings and how it is bein...
Leave your feedback!

Scattered domes, in a beer garden, to warm up in on a beautifully sunny winters day. Darling harbour, Sydney

Tensinet, our European equivalent, publishes a newsletter twice a year. Even if you are not a member there are a few articles that they share as a teaser

Just a short note to say that Boxing Day is a day of sporting highlights in Australia - as well as a lot of mahem at the sales.

The first day of the third cricket test at the Melbourne Cricket Ground - The "G" - saw a crowd of some 73,000 watch a slow scoring day on a flat pitch. India batting.

Also Boxing Day is the start of the annual Sydney to Hobart classic ocean yacht race.

From a lightweight structures viewpoint we have the extensive roof structures at the cricket. Also the fast sailing machines with their composite lightweight hulls, prestressed tensile rigging, tensioned fabric sails precisely cut to give a form to generate maximum driving force.

In recent years we have twin rudders and canting keels to maximize the functions of these appendages and in doing so further reduce the weight of the boats.

Some of the super-maxis have very large beams to enhance the planning ability and effects of the crew as ballast. 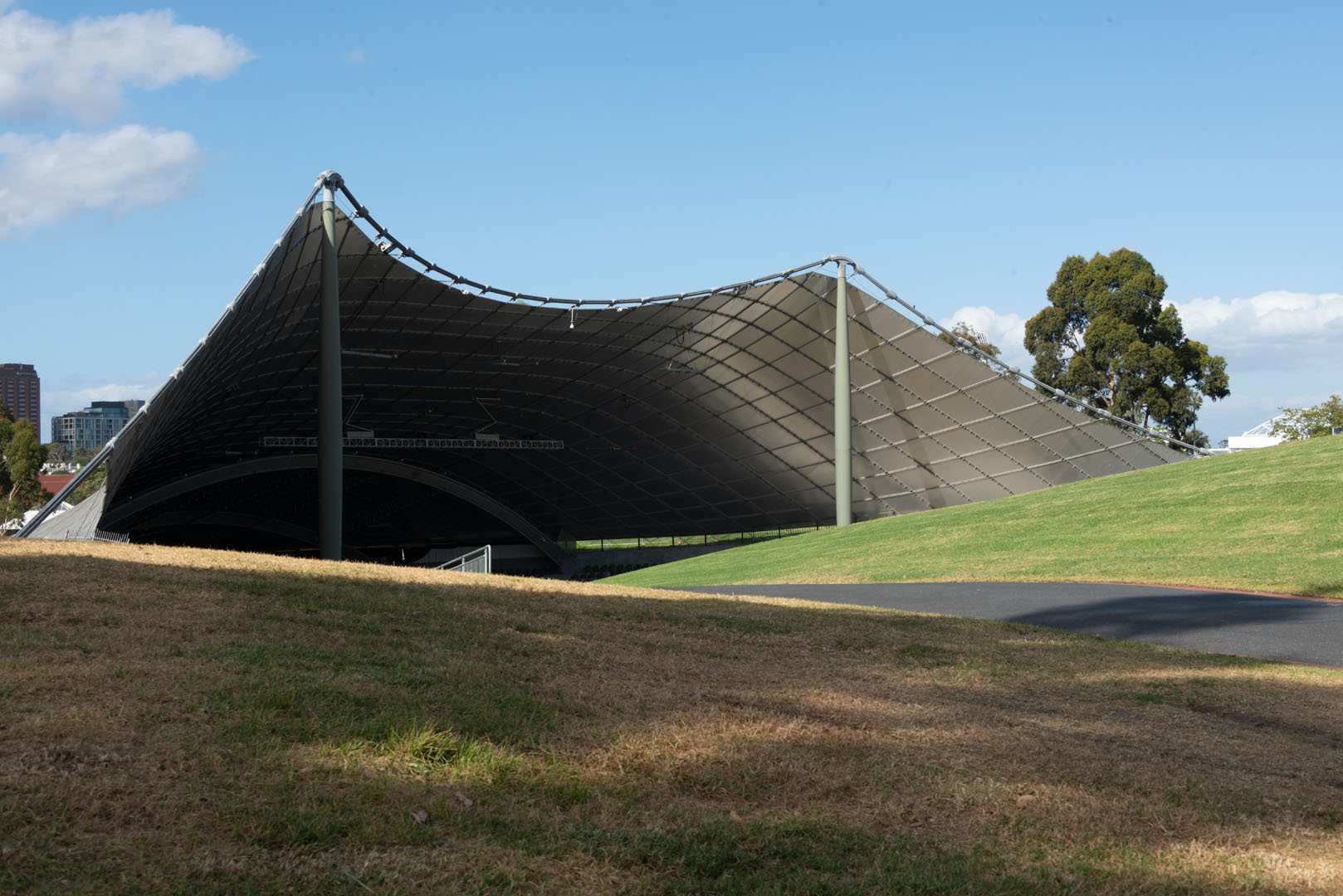 What an iconic venue in the Kings Domain in Melbourne! And Happy 60th Birthday!! WOW 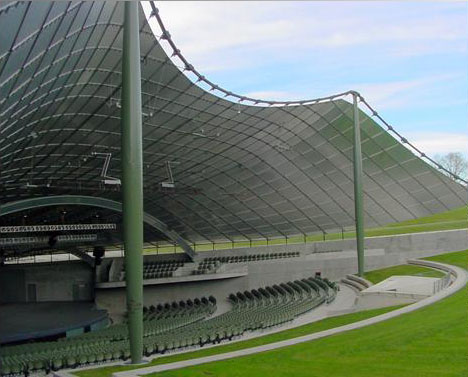 This is a unique tensile cablenet structure was designed by Barry Patten of the Architectural firm Yuncken Freeman Brothers, Griffiths and Simpson. Engineering was done by Irwin Johnstone.

In Sydney for the past 35 or so years there has been great free pre-Christmas Concerts for families.

The event is held in the Domain, and each year the quite large stage and the canopy is erected.

The founding President of the then MSAA (now the LSAA) was largely responsible for developing the canopy concept.

Vinzenz Sedlak started with a lycra model at a scale of 1:100 and envisaged four masts located near each corner of the stage. Diagonal cross cables spanned between the opposite mast heads and a long front edge cable gave an uninterrupted view of the stage area. 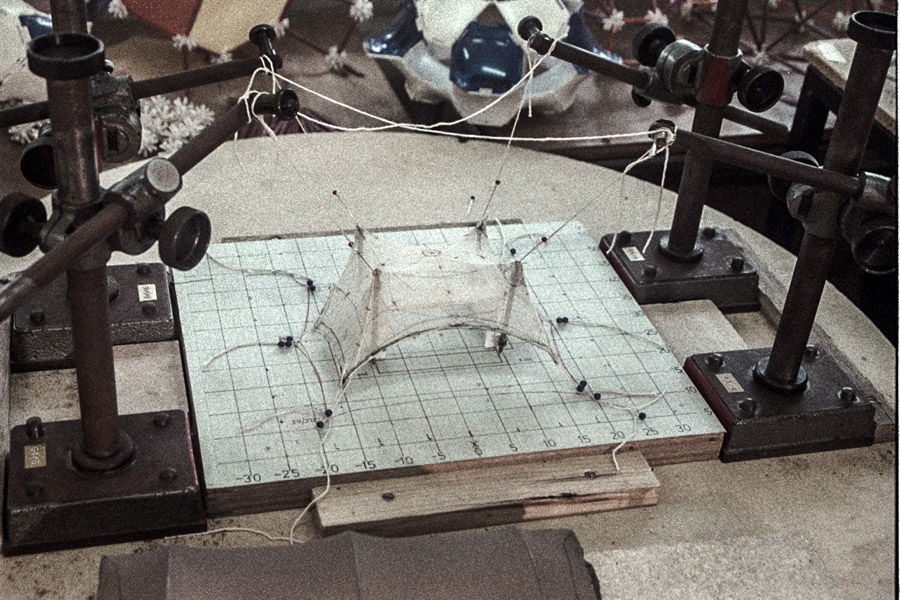 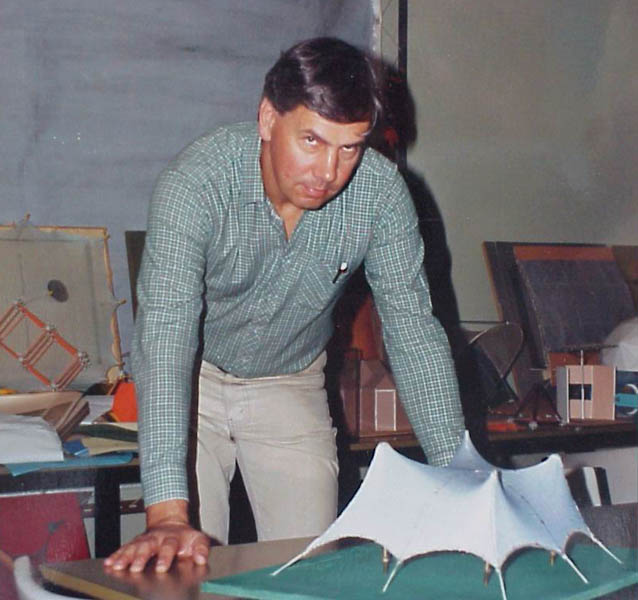 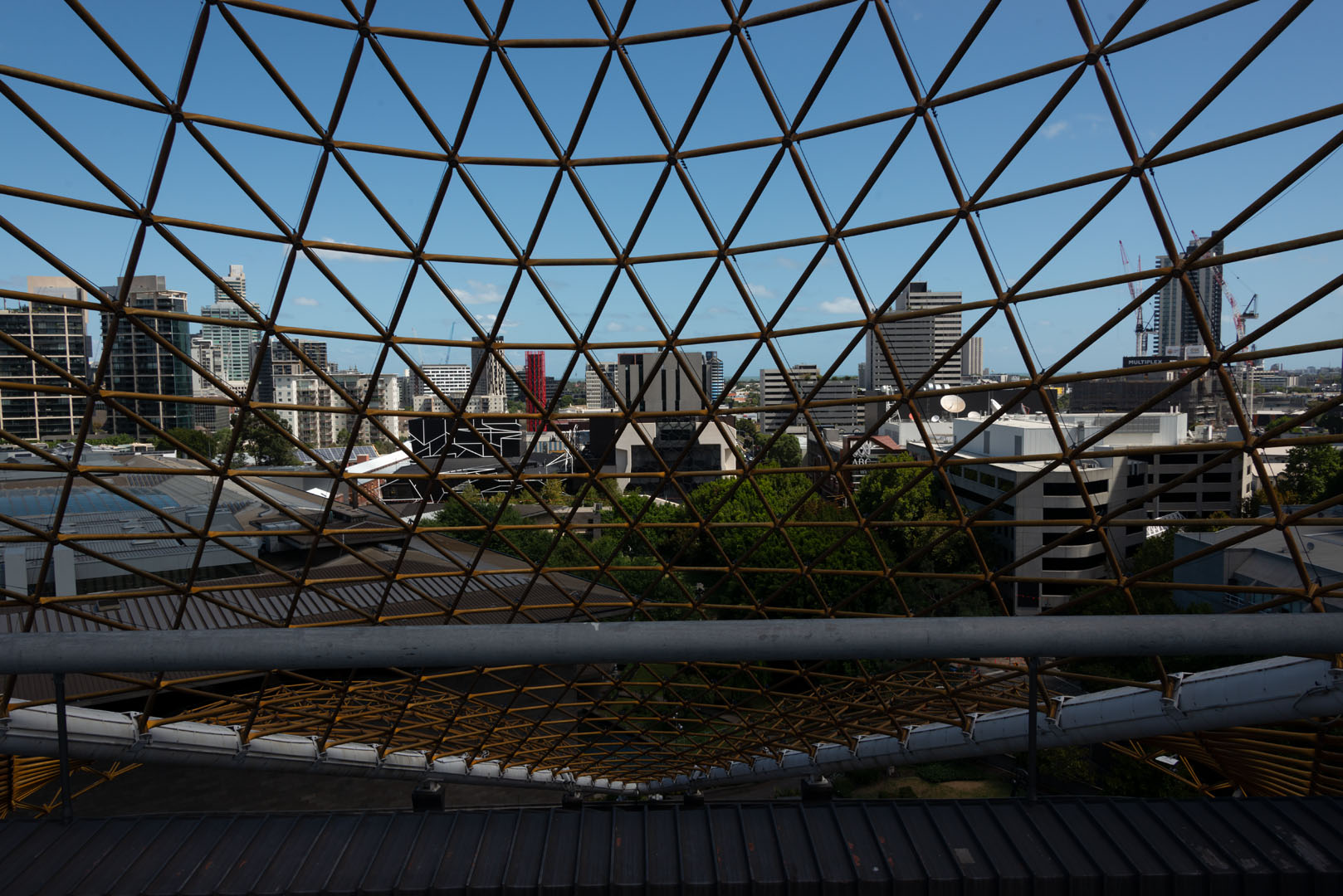 I recently had a short trip down to Melbourne and took a few pictures of the Arts Centre Spire which was constructed in the late 1970s.

Conceptually, the spire is a sculpture which was intended to indicate the location of something special located under the tall, tapering open lattice structure.

The "upper spire" is from bolted steel tubes with a geometry utilizing tetrahedrons so as to reduce the number of members meeting at a joint. Four joints are at each higher level and these four are rotated by 45 degrees in plan from those at the adjacent levels.

LSAA in the World Architectural Festival 2018

The LSAA committee has spotted two LSAA member projects in the shortlist of the World Architectural Festival 2018. Congratulations to your respective architects and the LSAA members that have contributed to the project’s success. Please let me know if I have missed a project. #WAF18 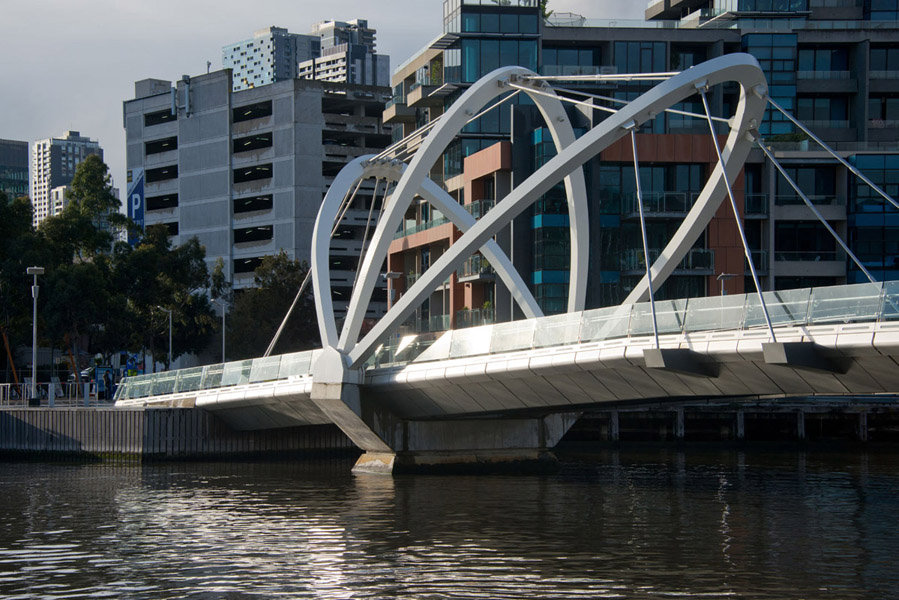 There has been a number of curved and interesting footbridges built recently here in Melbourne. See these pics: 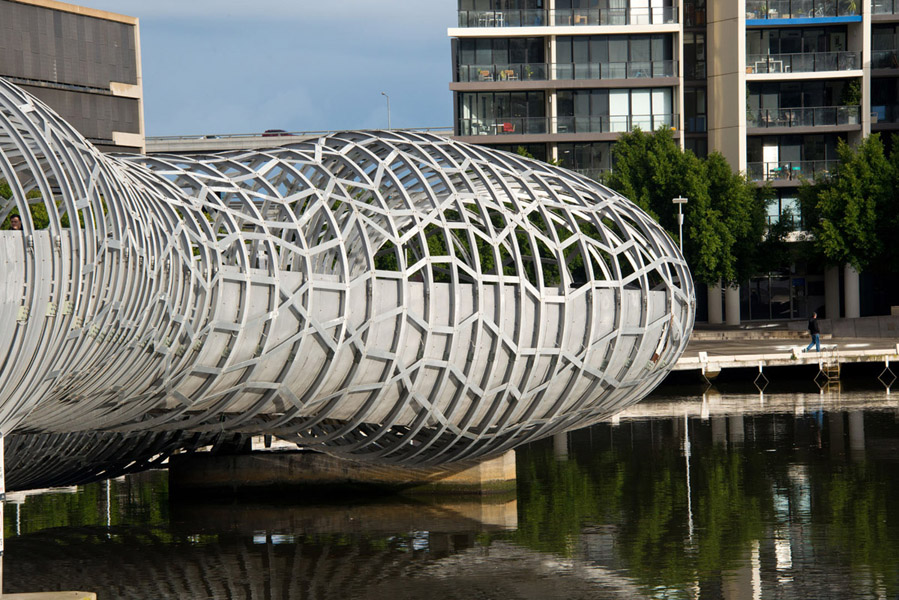 Rock climbers will rely on the extension characteristics of their ropes to cushion any fall to a deceleration that the body can withstand.

However the following link points to an extreme case of an engineered net to safely catch a dear-devil sky diver from a 7600m free fall without a parachute.

A parachute is also an example of a tensioned fabric structure which adopts a geometric form in response to applied loads (person plus air resistance).

See: https://www.createdigital.org.au/extreme-engineering-luke-aikins-skydive/ where the source of this image is acknowledged. 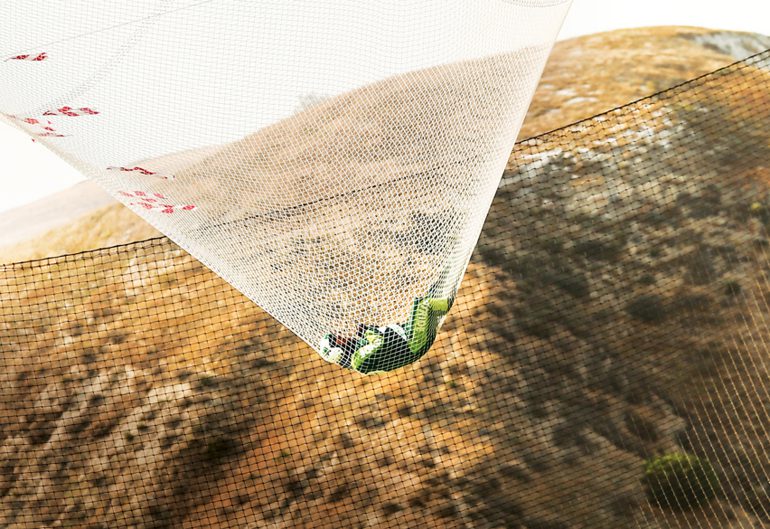 Project Highlight: Opening of HOTA (Home of the Arts) at the Gold Coast Cultural Precinct 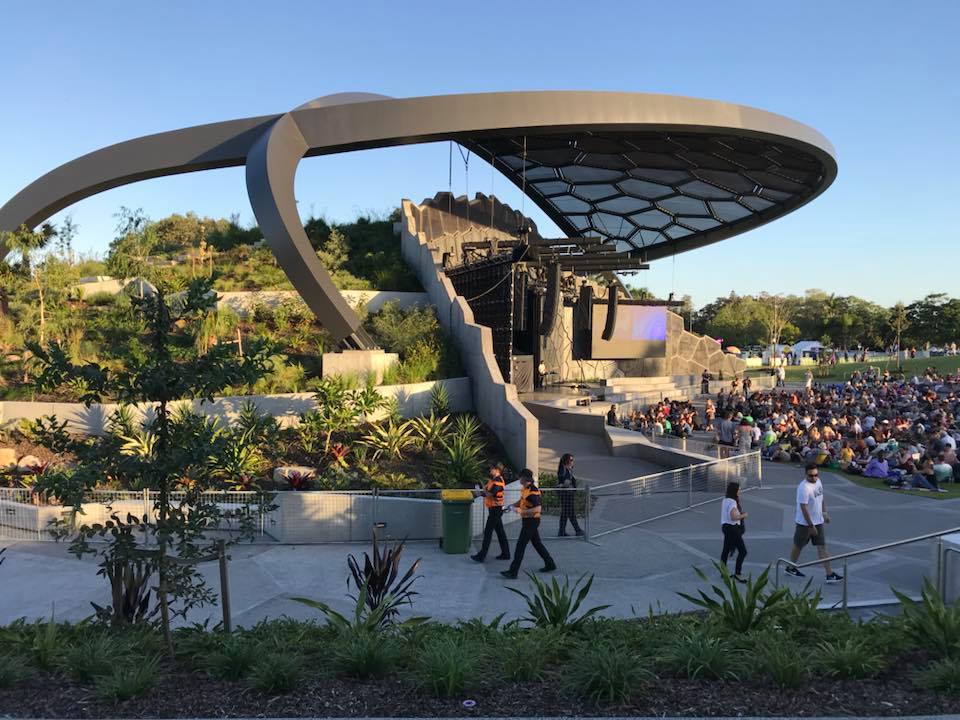 For more photos refer to:
http://fabritecture.com/project/gccp/

Also to an article HERE

Any feedback or Comments?

This exciting new facility is designed as a cultural hub for the Narre Warren area in Melbourne’s east, and its opening weekend was celebrated with two full days of exhibitions and performances for the community.

The building's dominant feature is the timber gridshell, the first of its kind in Australia.

Congratulations to all involved in this exciting project! 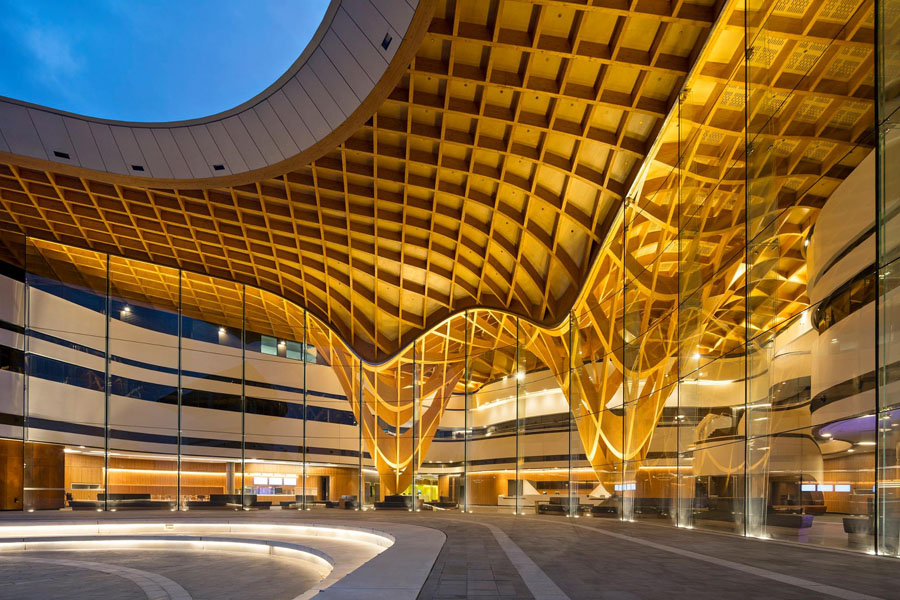