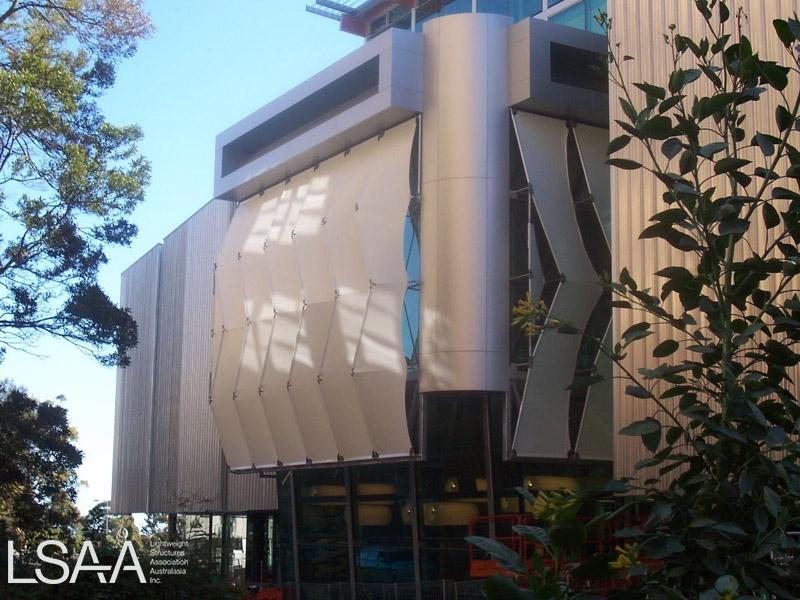 The PVC tensioned membrane vertical panels diagonally twist from the top of each bay to the bottom: each ribbon has a catenary edge, the corners are stressed to a series of intermediate horizontal steelwork stub columns with small threaded toggles.  The aim of the structure is to provide weather protection, particularly the sun, from the glazed façade within, so that plenty of light is allowed into the core of the building but it is reflected light, not direct light. 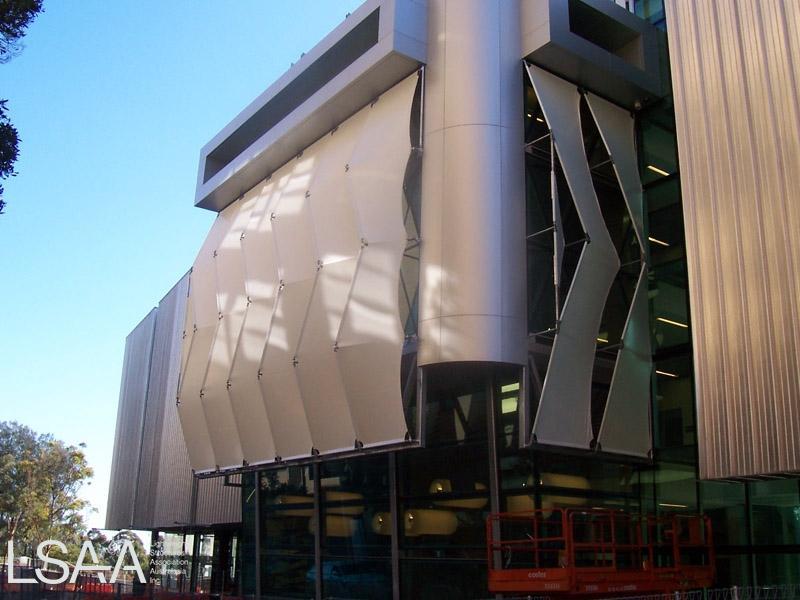 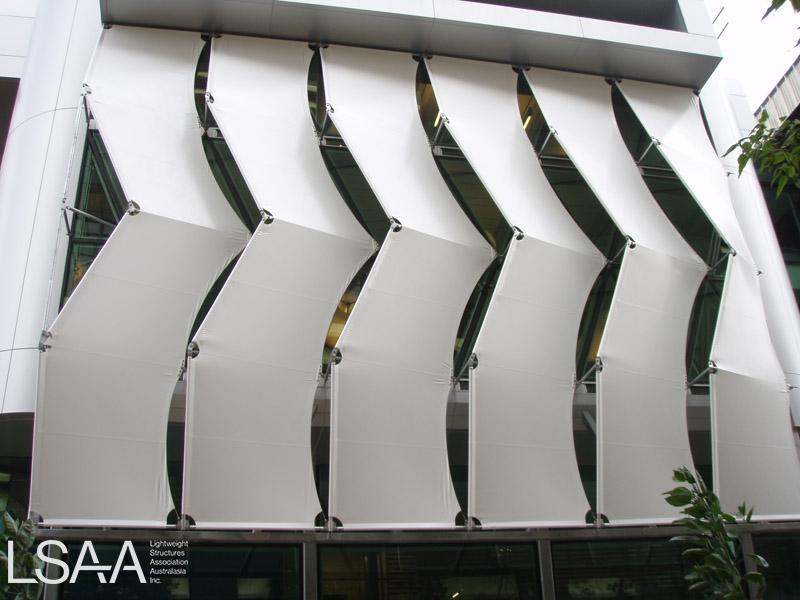 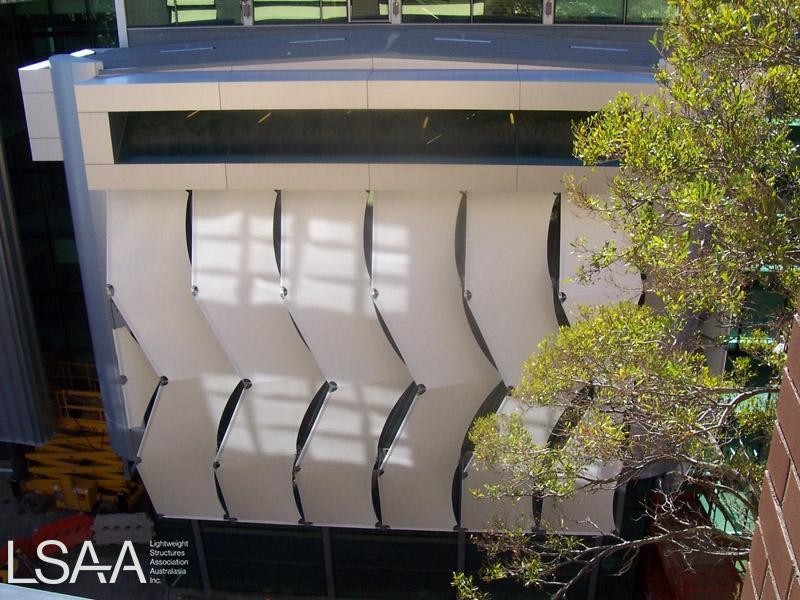 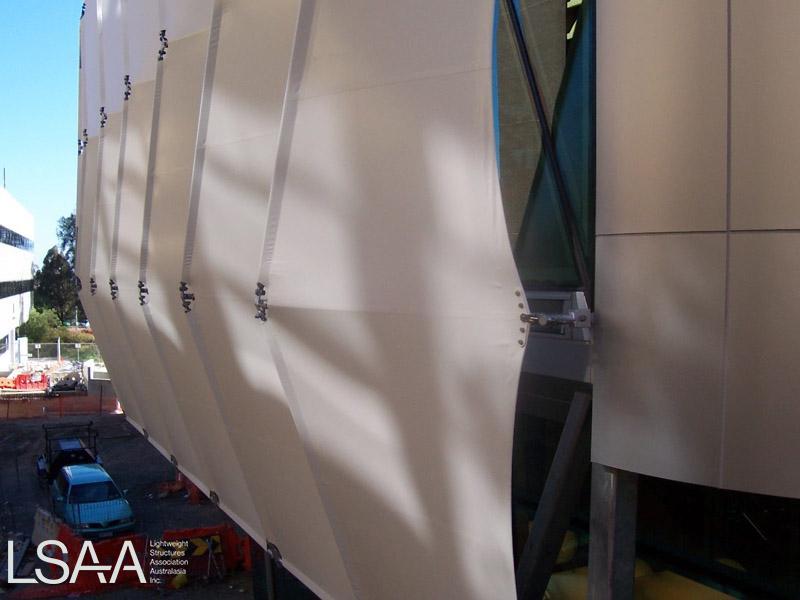 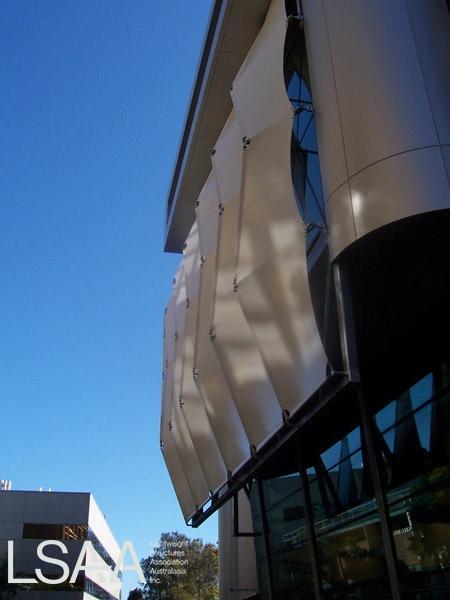 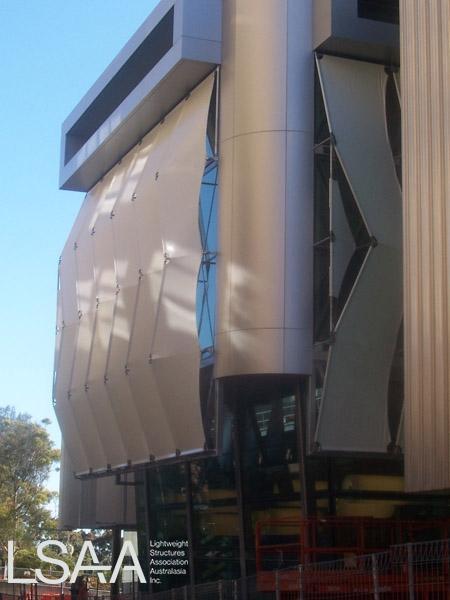 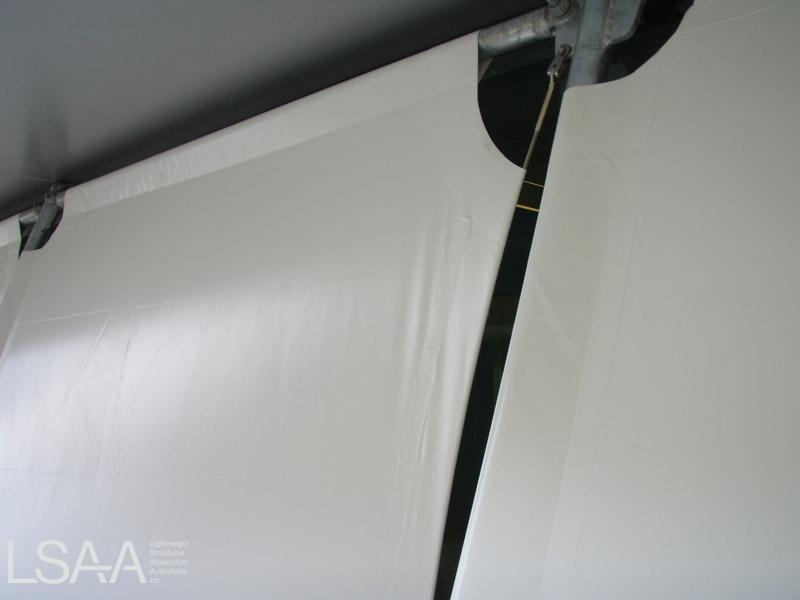 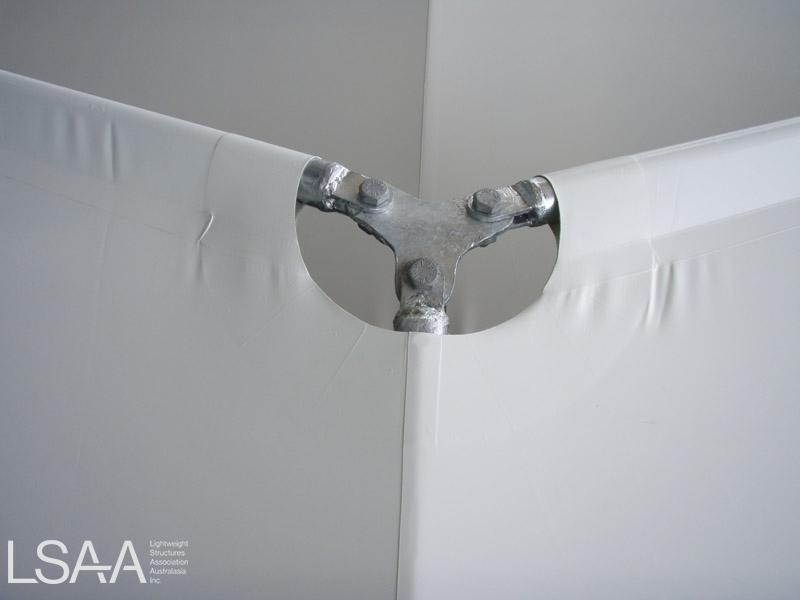 This project commenced in late 2005 where the client architect requested a means of providing protection from the sun with lightweight panels that appear to float on the façade of the building, like a series of vertical ribbons acting like a curtain.

The original concept had the tensile membrane clamped awkwardly to a small square hollow section, but after some further design and development, a catenary edge was preferred around the perimeter, supported at intermediate points by small horizontal stub columns.

The goal was then cited as providing 92% coverage of the glazing façade – Unfortunately the catenary edge allowed too many “gaps” so the final model saw the membrane sleeved over a small CHS member on one vertical edge while the other remained a catenary, with the fabric clamped at the top and bottom cord.  Client completely satisfied with the end result.

The small cleats that the builder provided, without earlier consultation with Oasis, proved to be awkward due to there small nature and close vicinity to the glazing.  The cleats had to be removed and replaced with something slightly larger to accommodate the implied loads.

The geometry is the most interesting component of the project as to achieve the 92% coverage, we had to come up with the most efficient use of materials and maximize the amount of coverage available without distracting from the aesthetics of the “lightweight ribbons”.  Some of the smallest available adjustable components had to be incorporated in order to achieve this goal.

Oasis chose a medium density fabric, in this instance Ferrari 702 S 8104 PVC – a lighter weighted fabric could have been used but there were some longevity issues around the lighter weight and since the fabric was intended to be sleeved over a rough surface galvanised CHS members, a slightly thicker material would suffice.

The stainless steel hardware had to be small yet capable of adjustment.  The micro threaded toggles RF1504-0808 provided by Ronstan International proved perfect to allow the intermediate membrane clamp plates to be tensioned into design position within millimeters of the support, as the threaded toggle was literally tensioned through the support stub columns.

The design of the stub columns were critical to the success of the project.  Tensys engineering detailed the complex stub columns to allow adjustment at the top and bottom of the stub – each stub had to support two structures – add to the complexity of this was the fact that every one of the cleat connections that protruded beyond the façade were inclined to match the diamond shaped glazed windows.

The shop detailing of these components had to be accurate with tolerances of 2mm (in one instance) being rejected and re-fabricated.  The angle of the tube that accepts either the catenary edge or the intermediate threaded toggle had to be within 2 degrees or either clash with the edge of the tube or create wrinkles within that region.

The construction of the Façade Structure was also a feat in itself.  The steelwork could not be installed without the fabric and (obviously) vice versa.  The stub horizontal columns were initially connected (with correct orientation) and then a portion of the frame.

The prepared fabric (complete with inserted catenary cable, membrane plates and adjustable link attached) was then sleeved over the top horizontal member and carefully unraveled just enough to sleeve over the next tube, while attaching the toggle to its opposite.

The toggles were only inserted loosely until all of the fabric had been sleeved over the struts, including the bottom cord.  The membrane was then tensioned via the threaded toggles along the intermediate points along the vertical edge.