As the first project to be delivered from the HOTA masterplan, the Outdoor Stage welcomes people 24/7. It is a highly versatile venue – a black-box theatre with a back wall that folds away completely, opening the box out onto an amphitheatre with seating and lawn space for 5,000 people.

The shade canopy of the Outdoor Stage is a striking steel structure featuring the distinctive HOTA masterplan design motif: the Voronoi – a dynamic, cellular geometric structure that unifies the precinct visually. The overall form of the canopy is defined by the surface of a sphere bounded by two arcs. The canopy’s tubular members are joined to one another with rigid connections, forming a stiff ‘Vierendeel grid shell’ system which resists vertical loads though a combination of bending and axial forces. 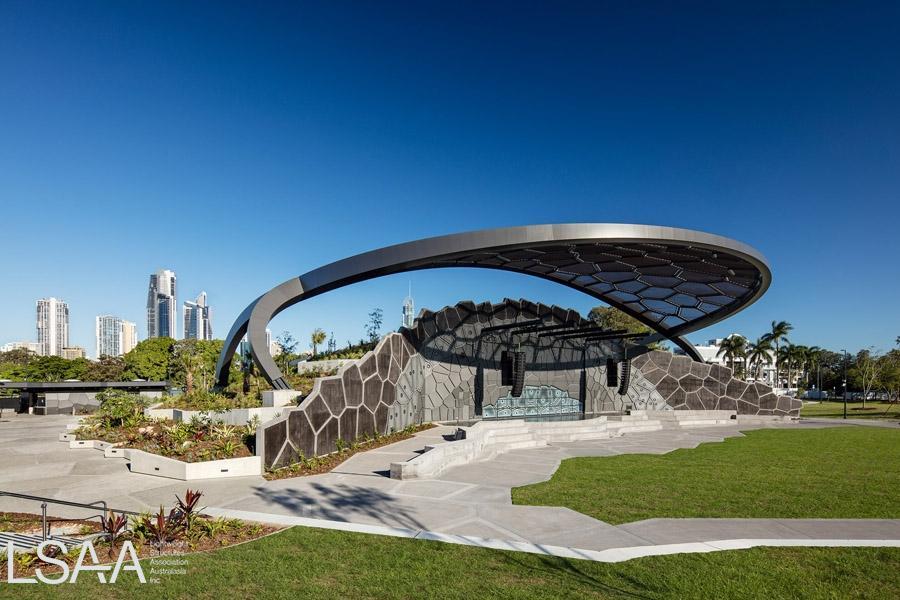 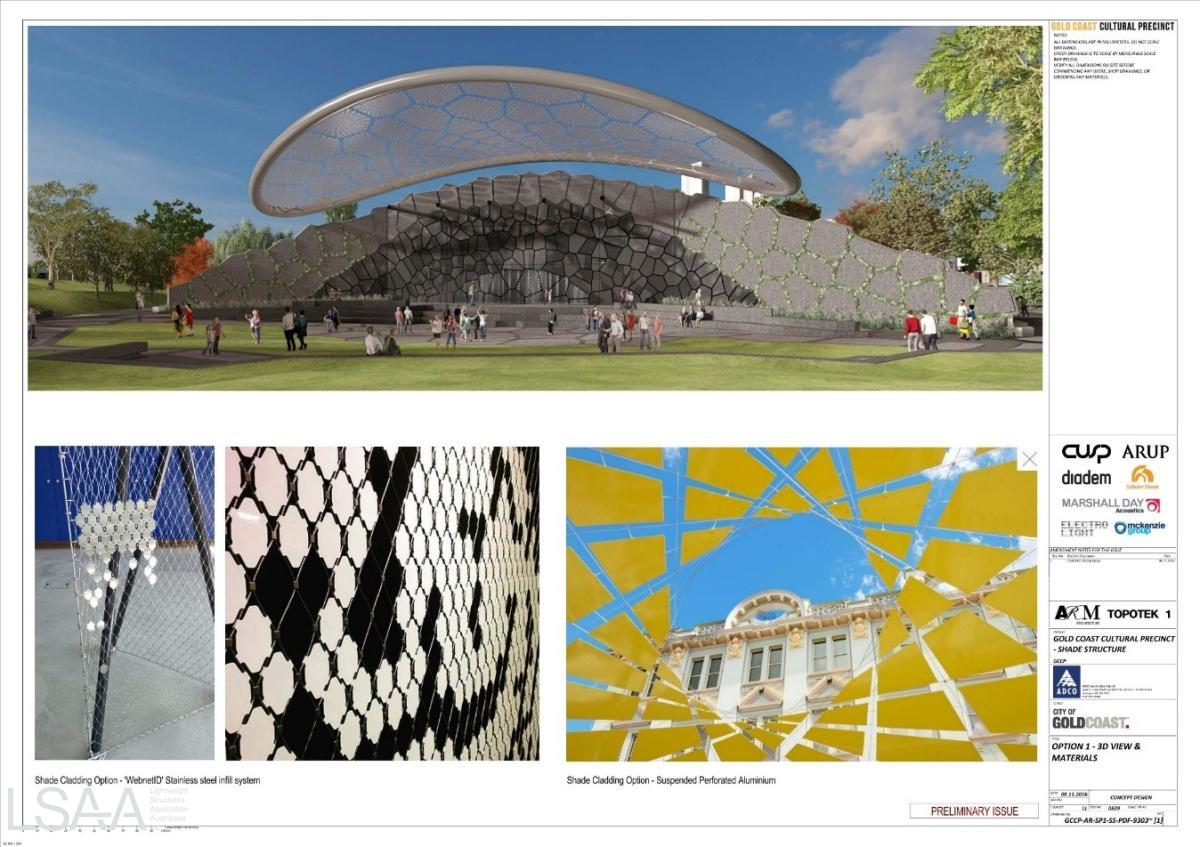 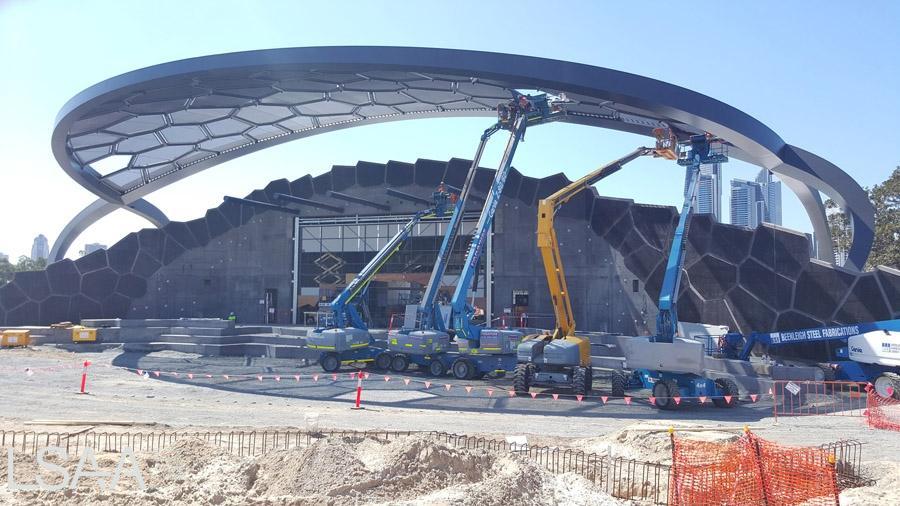 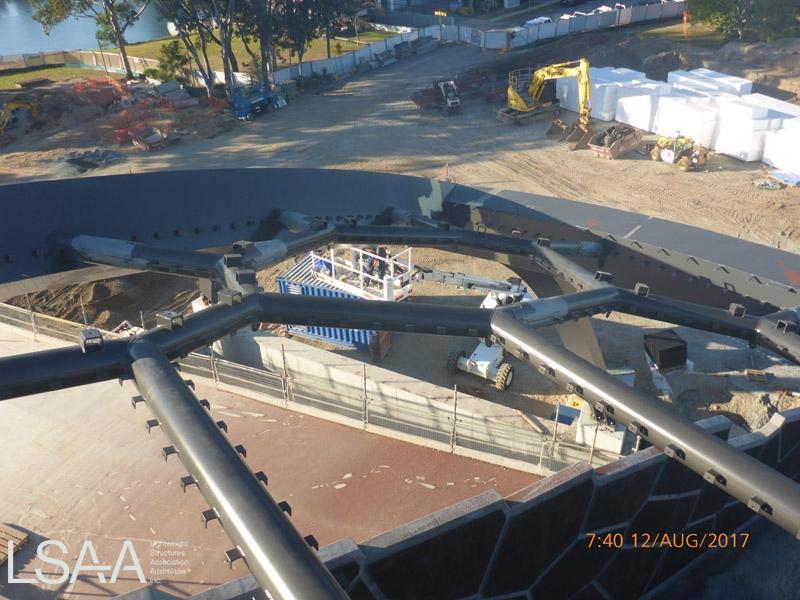 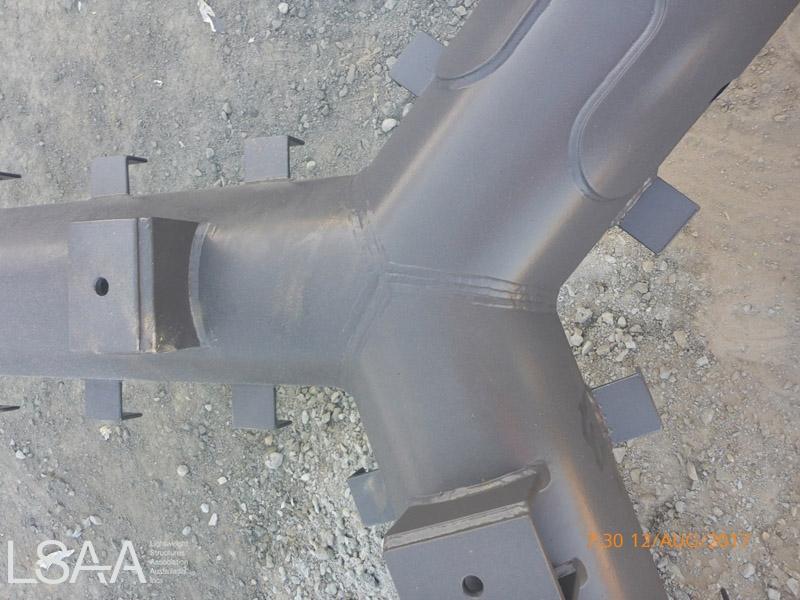 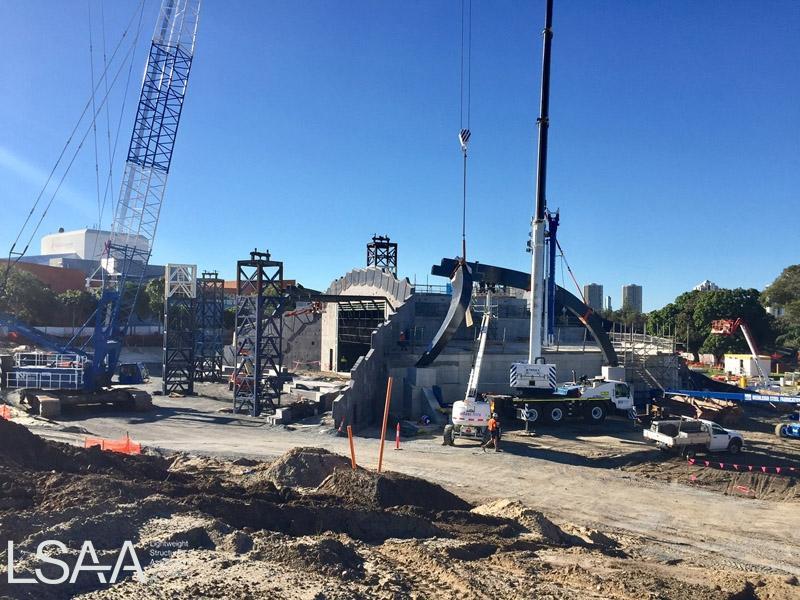 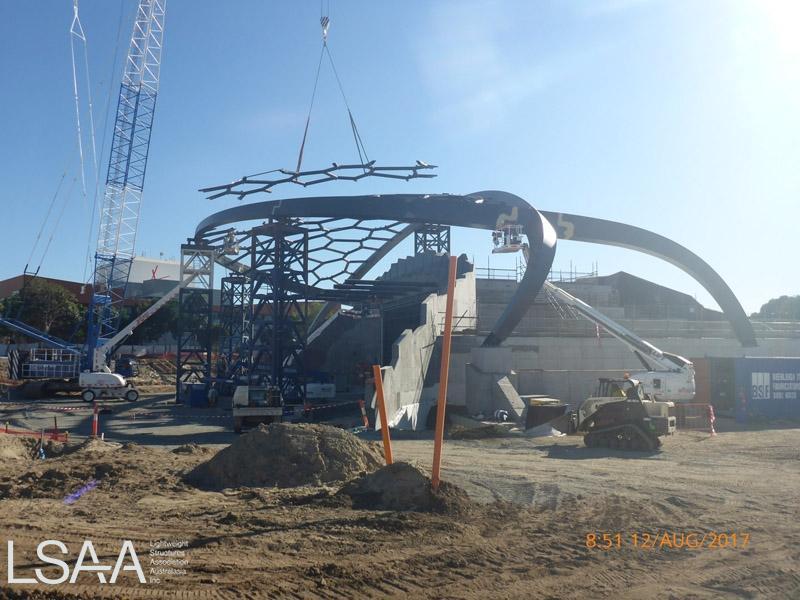 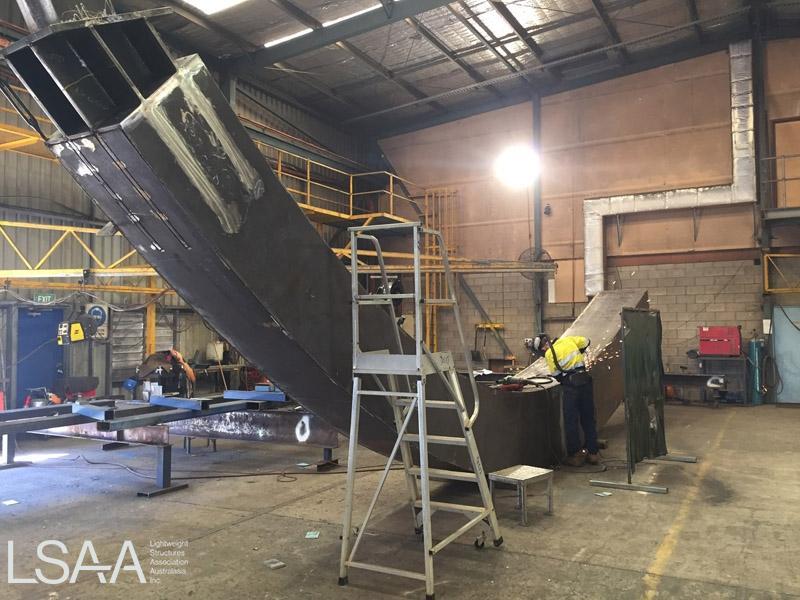 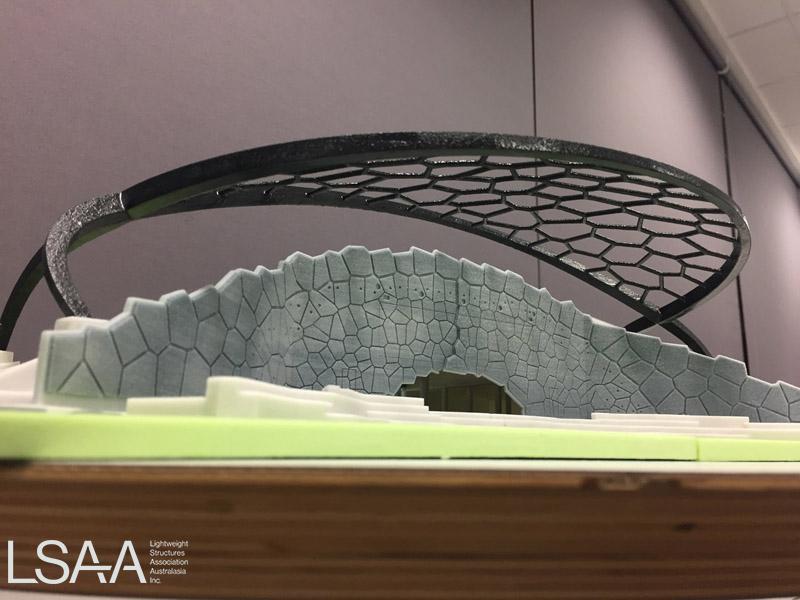 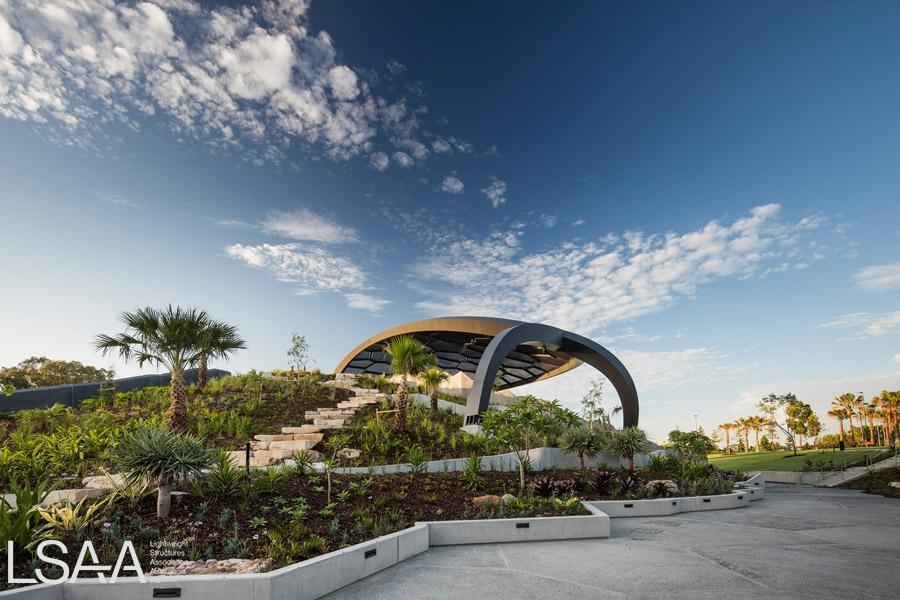 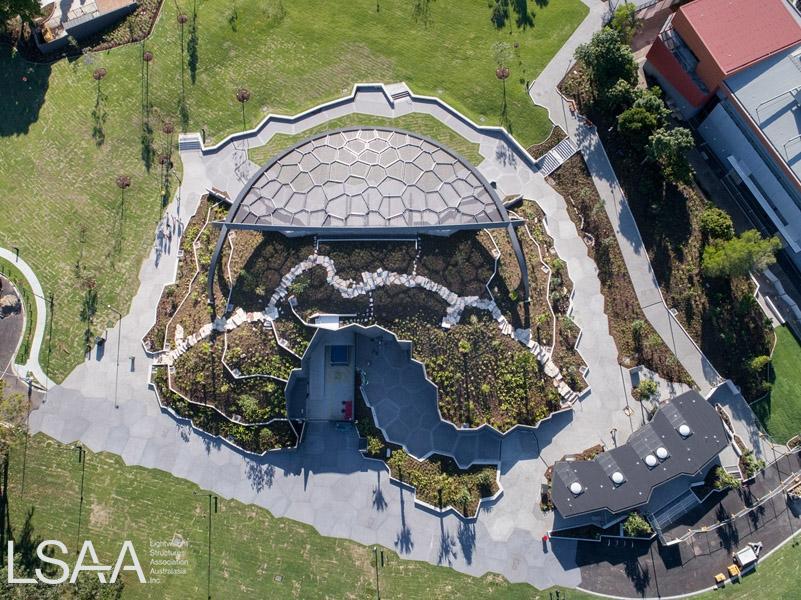 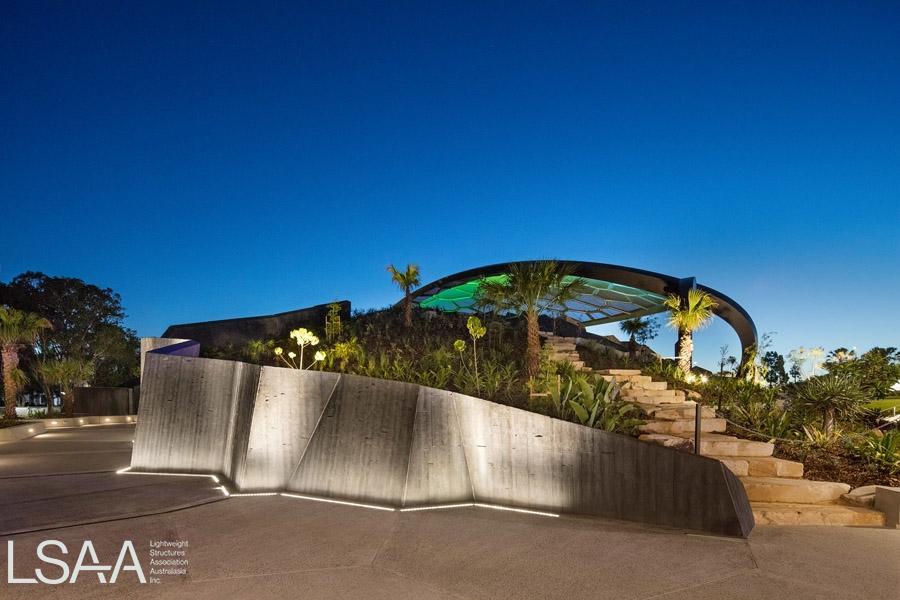 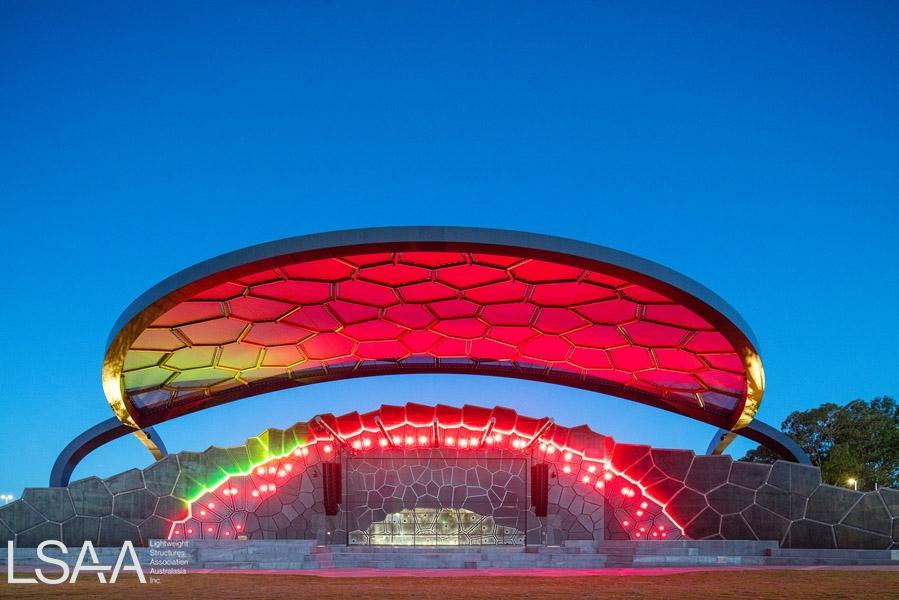 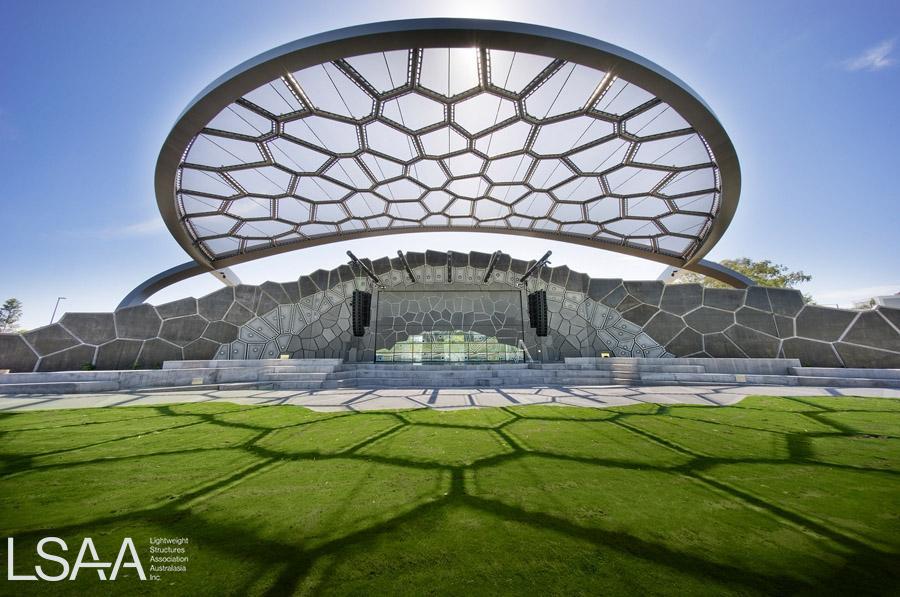 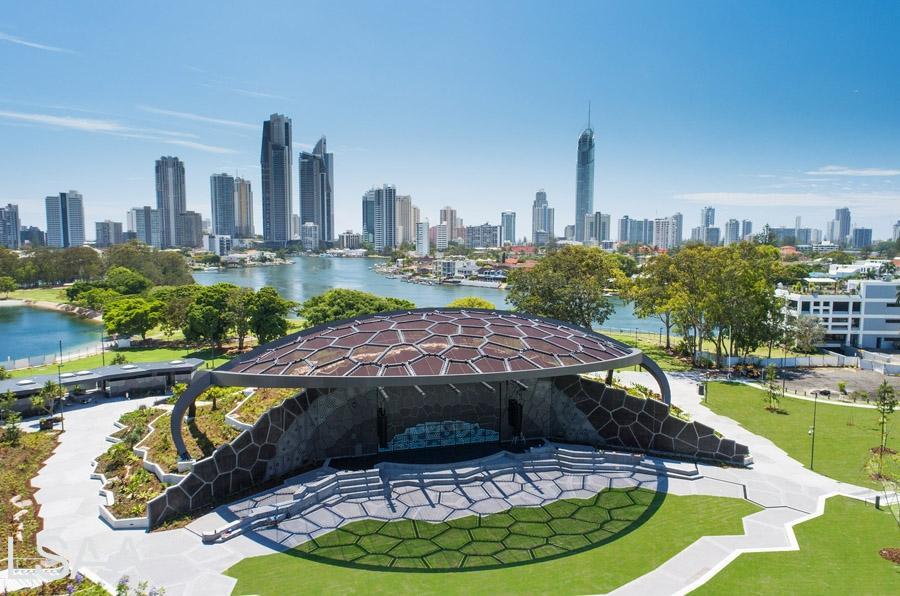 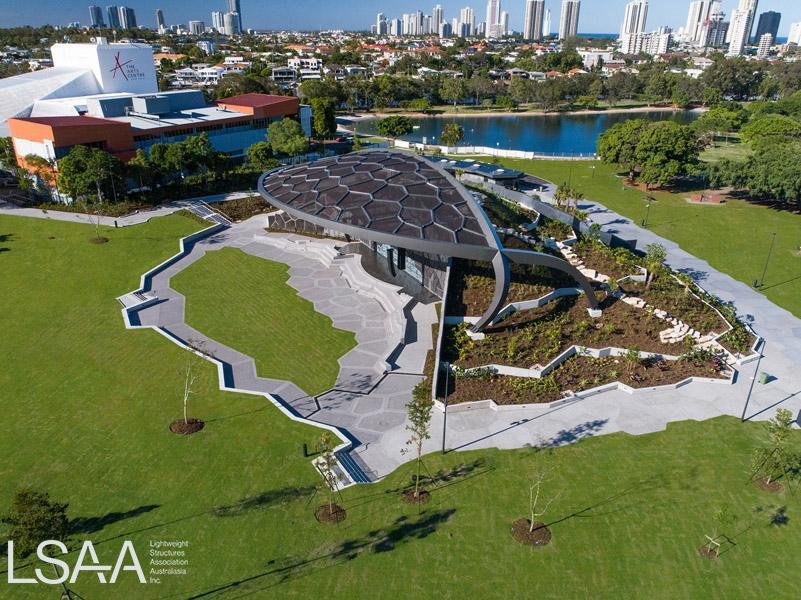 Images (c) John Gollings and/or City of the Gold Coast

The Voronoi pattern contained within the canopy appears in the final product as a visually complex form but is actually composed of very simple, fundamental geometries and rules which simplified the design of the steel shell connections and the whole of the construction process. The complex geometry necessary to achieve such a memorable structure came about through exceptional collaboration between the client, contractor, design team, shop detailer and steel fabricator, a construction led approach to design, and innovative structural engineering.

Extensive use of parametric design techniques and shared models allowed rapid development and assessment of large numbers of framing options to drive optimisation of the selected form. The project was designed with construction in mind which resulted in a safe, speedy and economical build.

The initial brief was launched by the City of the Gold Coast as an international design competition to masterplan a new cultural precinct at the Gold Coast. The successful masterplan proposed by ARM Architecture, landscape architect TOPTEKI and multidisciplinary engineer ARUP transforms the Nerang River site from a government precinct of ageing cultural infrastructure and redundant commercial buildings into a thriving community hub aptly named ‘Home of the Arts’ (HOTA).

The brief for the canopy specifically came about as a second stage to the HOTA outdoor stage that was under construction at the time, which entailed a reinforced concrete building that is enveloped by the landscaped mound and front facade.

This brief entailed a canopy that is to be 600m2 in area, was structurally independent of the as-built theater, did not impede the sightlines of the front façade with no column to be placed in front of the façade, clearance for trucks to have access to stage to allow for bespoke rigging for concerts, maximise shade and tie into the architectural language of the precinct.

Please refer to Figure 1 that shows the initial architectural intent for the canopy.

The geometry of this canopy is simply defined by the surface of a sphere (refer to Figure 2). The primary 20m cantilevering fabricated steel box is defined by two arcs that meet at the two common “knuckles” on this surface that are adjacent to the forestay support. This meant that the boxes are singularly curved for ease of fabrication.

Where these arcs pass through the “knuckle” the curvature of the member has been increased so that the structure is not climbable from the landscaped mound. The forestay and backstay at the surface of the landscaped mound are supported by a reinforced structural capping beam that is in turn supported by piles. The centre of mass of the structure lies between the just behind the forestay so there was no net tension during construction. The span between forestay supports is 50m.

The primary arcs support a Voronoi tubular shell structure that is projected onto the surface of the sphere. Because this Voronoi shell is not triangulated in plane like a typical diagrid there are significant veirendeel moments to account for in the design. The governing structural load case is wind combined with weight of the structure.

The tubular Voronoi shell steel in turn supports the perforated PVC cladding that is aligned on the centre of the tube to highlight the structure from all angles.

The roof superstructure is of steel construction which was chosen because it is a compression/tension shell form. Also, the ‘lightness’ of the roof could not have been achieved with another material. Australian steel was specified, reducing the carbon footprint of the project, and transport and construction processes were reduced through careful design of the structural steel elements.

The fabric cladding was Serge Ferrari’s Solis FT381. This material was chosen for it shade qualities and available range of colours.  It also had the ability to span between the veirendeel shell without any additional secondary structure.

The steel superstructure connections are all welded and the structure was broken down into modules for ease of lifting. The fabricator preferred site welded lap plate splice connections which were incorporated into the design.

The primary arcs were also broken down into three modules with a halving joint detail for ease of placement for site welding.

The design team worked with local steel fabricator BSF to develop a design which was compatible with their procurement, skill set and resources. Local industry participation was critical to reducing the transportation impacts.

Due to the quite challenging brief many conceptual ideas were parametrically developed between the engineer and architect that were refined over time. This geometry was primarily coordinated through Rhino and Grasshopper which were shared on occasions a few times a day. An example of this was the coordinated design constraint of sightlines to the front façade being provided as a surface by ARM, which Arup used as a geometric design constraint in the refinement of the form.

Due to all parties of the design team being in different cities there were only a few opportunities to communicate in workshops and design meetings. Effective coordination and collaboration lead to the final solution seamlessly tying into the landscaped mound and the architecture of the precinct.

Fabrictecture was involved early in the design process, advising on all types and forms of cladding ranging from aluminum that was cable supported through to the as-built membrane solution. Their input was integral in steering the design to the as-built solution on budget.

The project was completed on time and within the $37.5M budget and has provided the Gold Coast with a highly successful first stage of the HOTA Precinct.

A key focus of the shade canopy design was containment of overall project costs. The design was driven by the need to remove risk through early adoption of a design based on ease, speed and safety of construction. Arup worked closely with the design and client team, contractor, steel fabricator and shop detailer to ensure buy-in from all parties to the canopy construction sequence and methodology upon which the design was based. The detailed member and connection designs were then developed collaboratively with input from all to ensure the challenging budget requirements were satisfied.

With overall project costs in mind, specifically ongoing costs associated with maintenance of the asset, the project team undertook numerous studies for the steelwork coating system. By taking a full lifecycle approach, the team was able to assess fading of colours, maintenance and corrosion protection against a number of solutions to optimise the overall design and coatings selection. The outcome was a coating system able to provide a cost effective solution during construction whilst minimising long term maintenance requirements for the structure.

Costs were minimised in the following ways:

The design was refined to deliver an elegant and extremely efficient use of steel.

The steelwork elements were designed to maximise the pieces that could be transported to site – reducing the number of trips required and associated transport costs.

Client:  ADCO Constructions for the City of Gold Coast