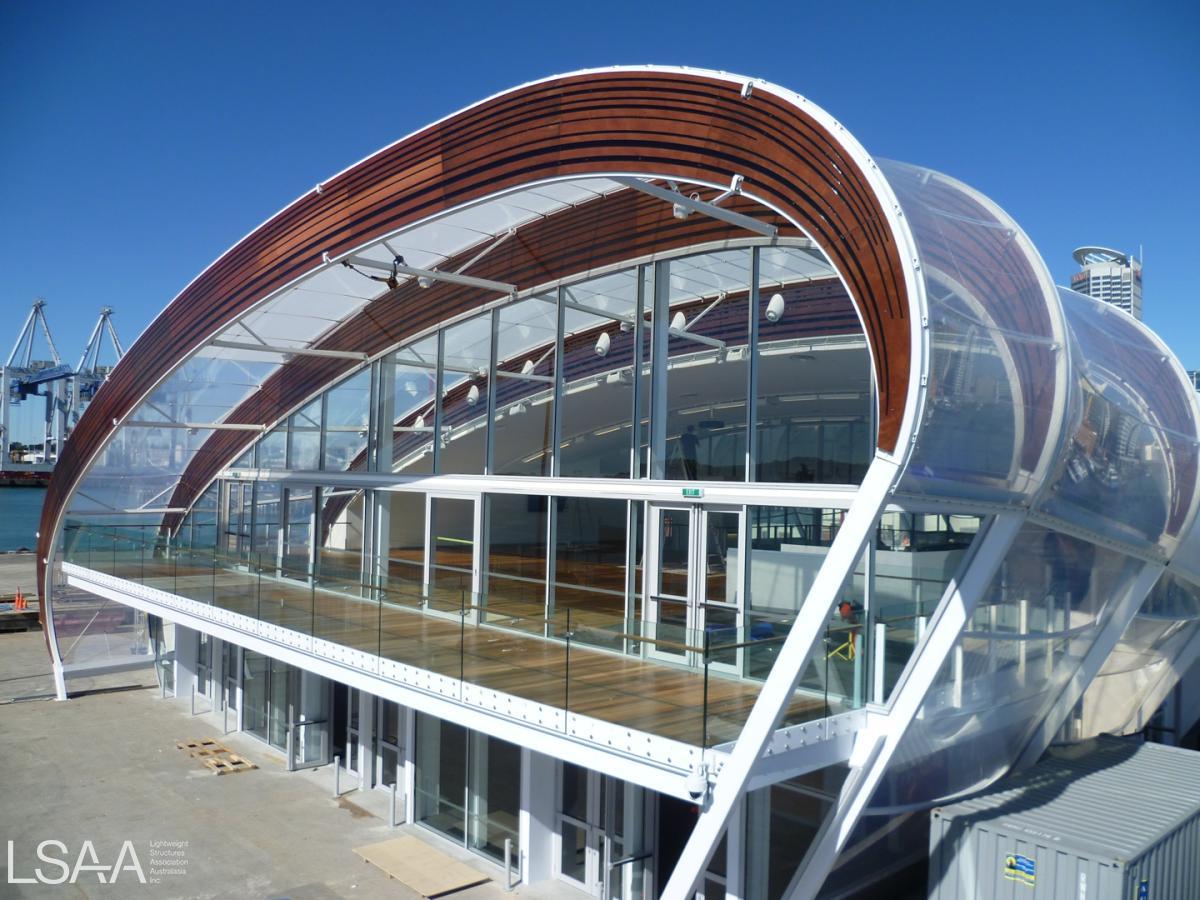 The Cloud is a semi permanent structure erected on the western edge of Queens Wharf to accommodate the city's commitment to hosting an inner-city fanzone, festival and showcase event during the Rugby World Cup 2011. Installed as part of the recent 18 month redevelopment of Queens Wharf, The Cloud will be utilised by NZ2011 to showcase the best of New Zealand innovation and creativity during the REAL New Zealand Showcase. At almost 180m long, The Cloud can accommodate up to 6,000 people. 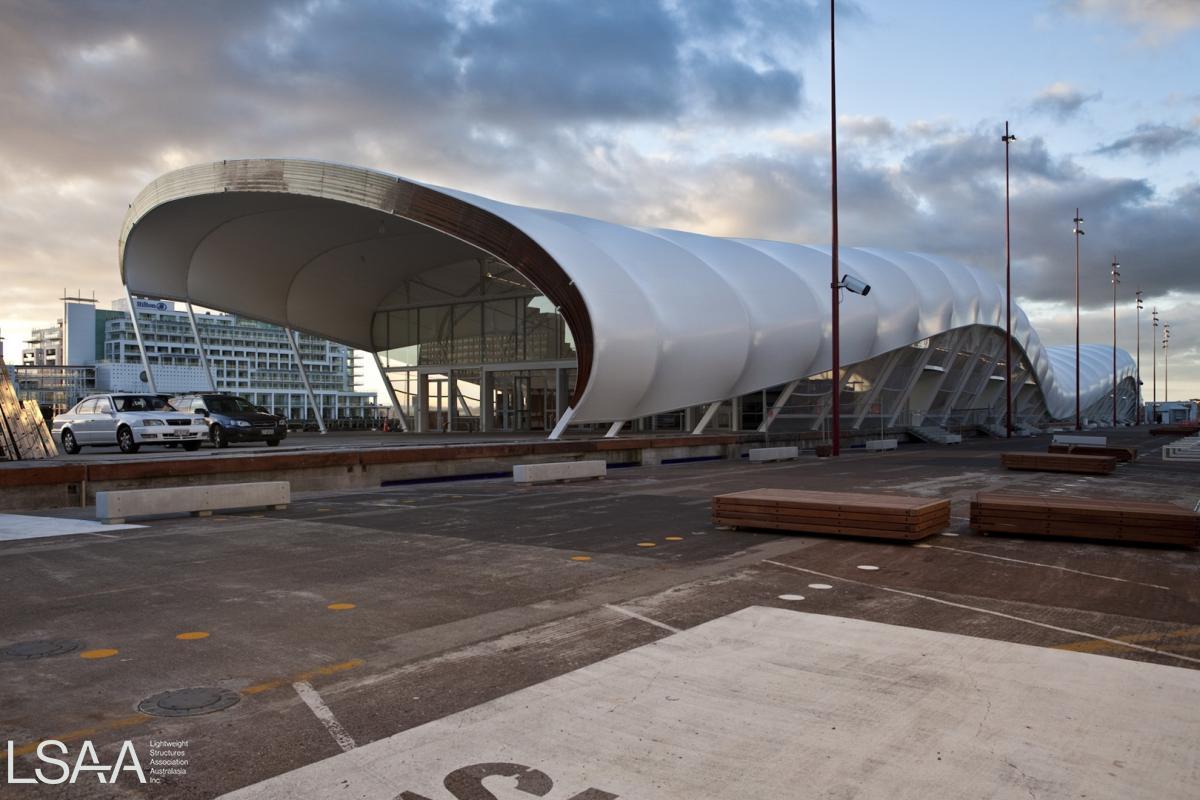 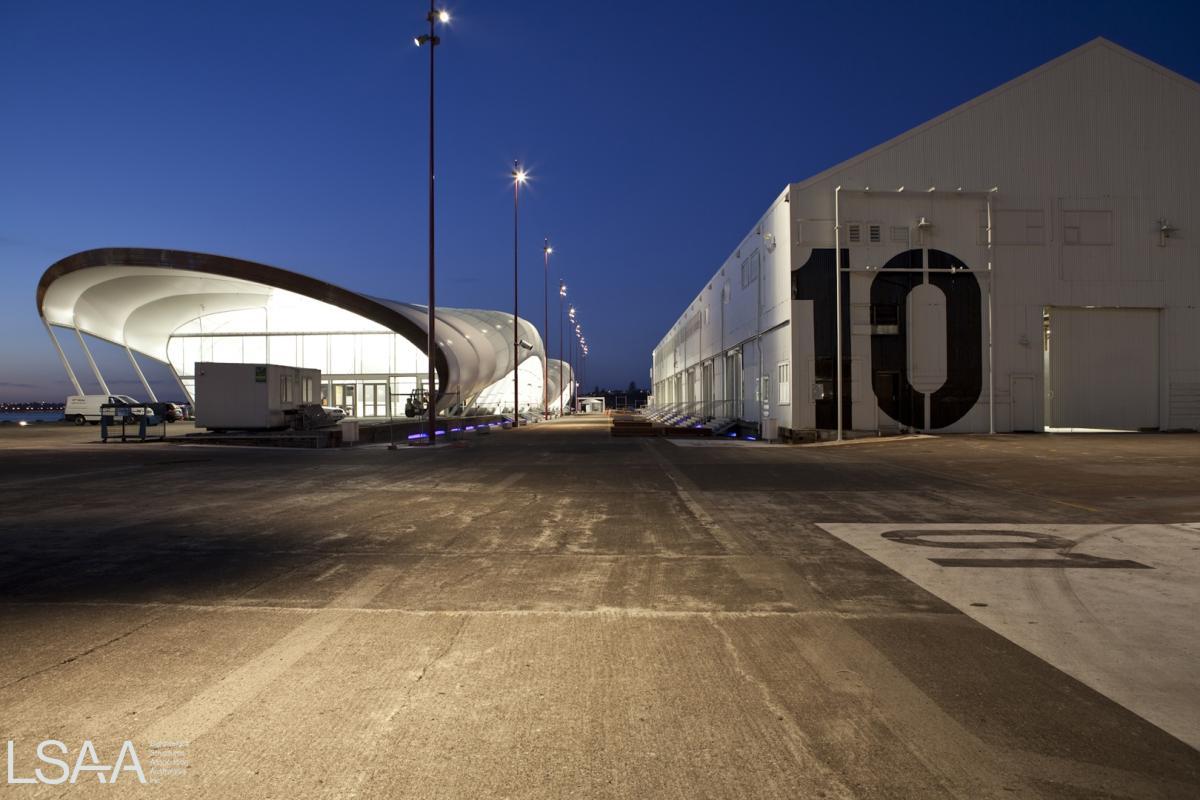 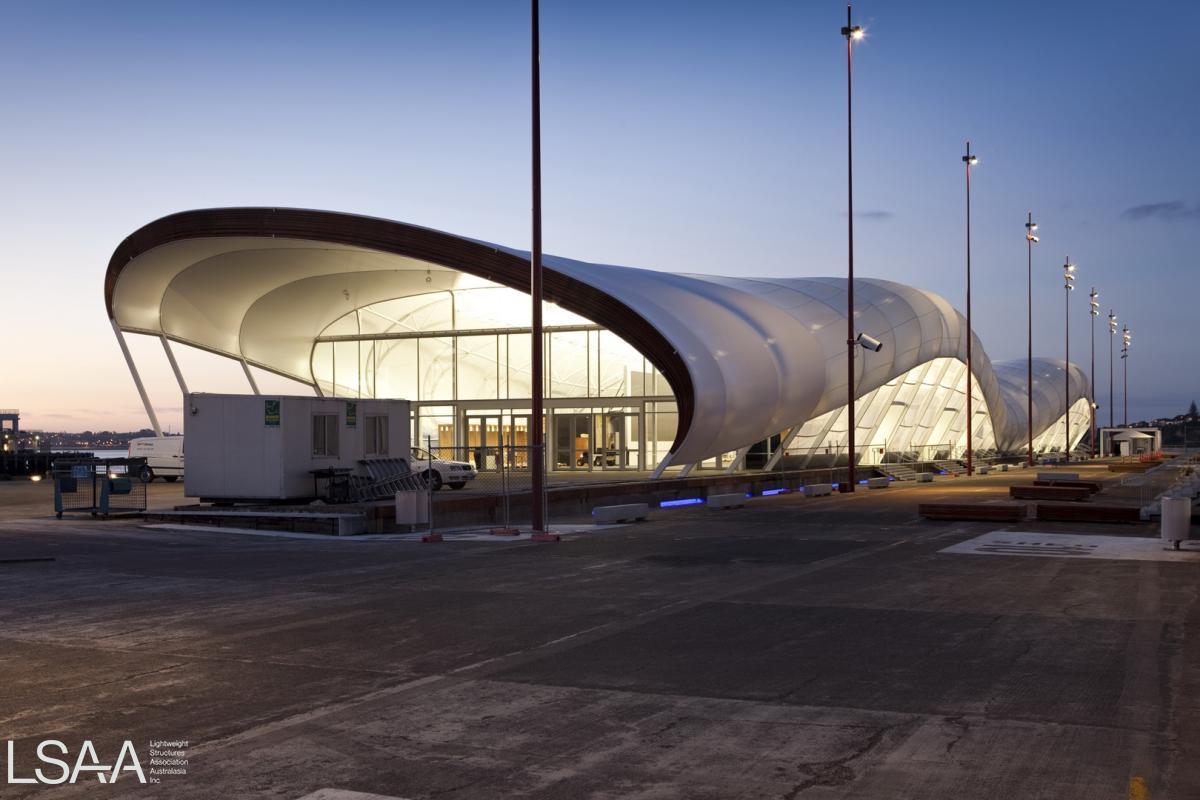 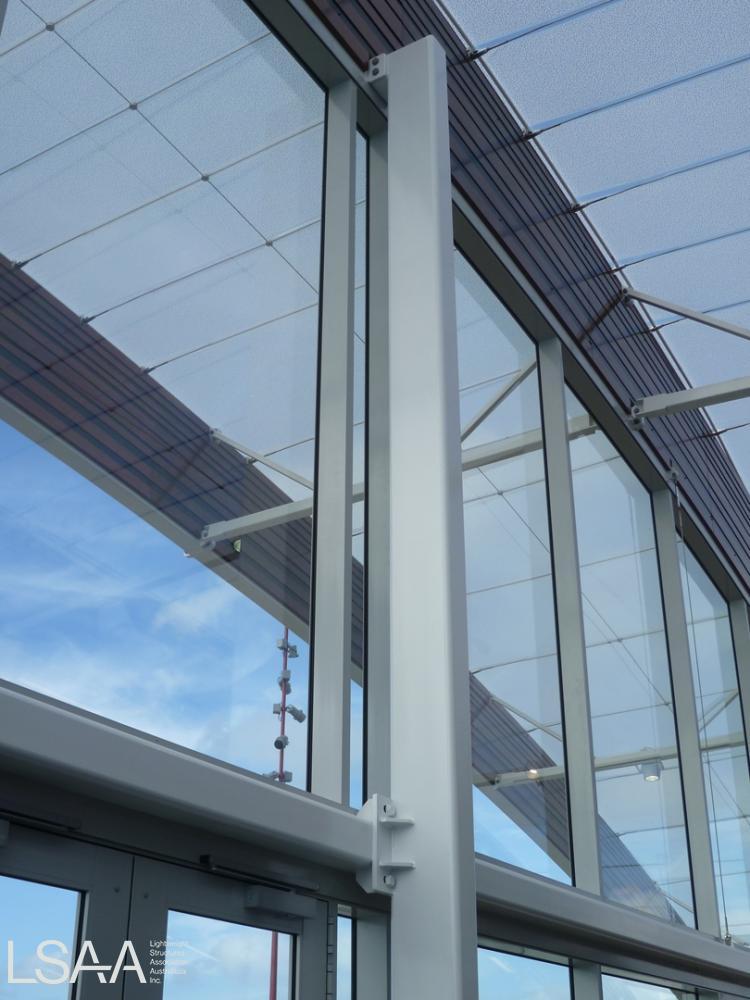 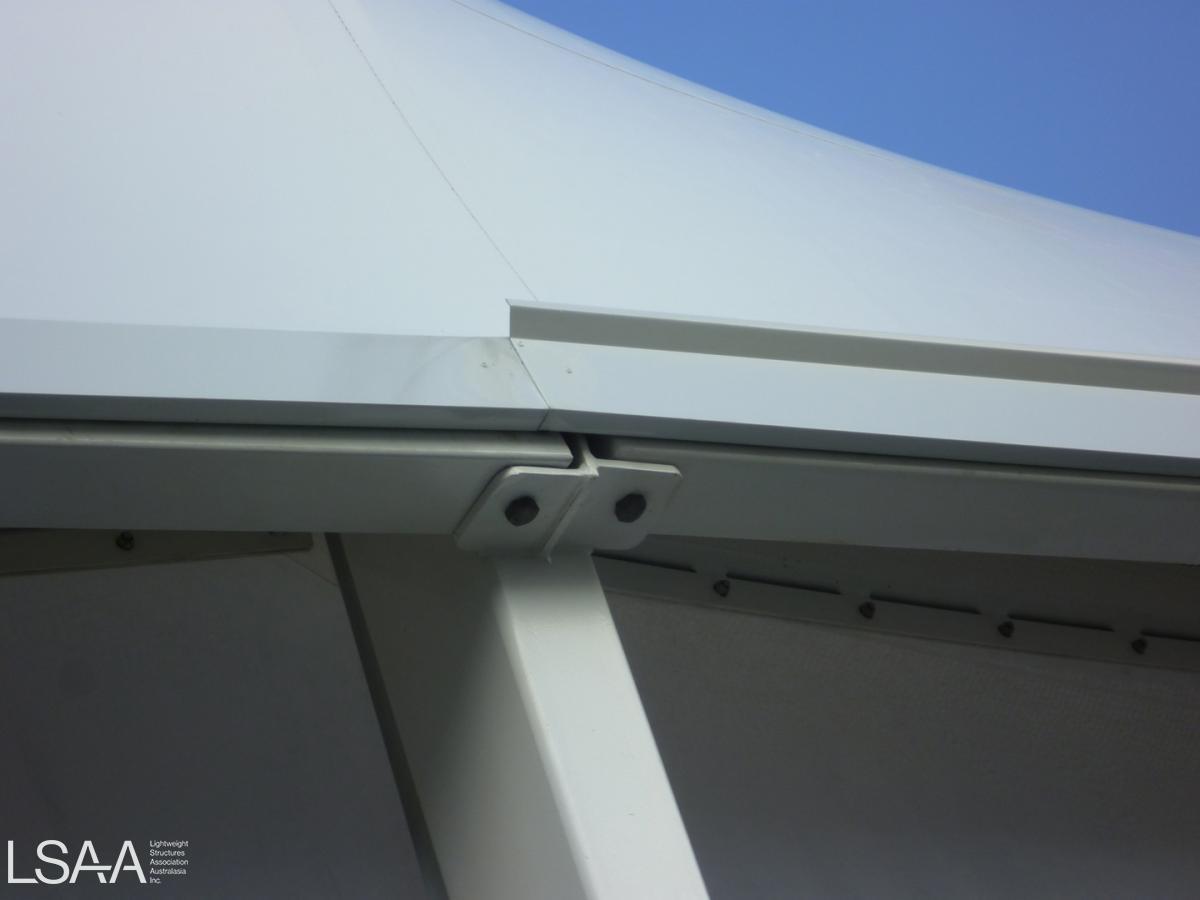 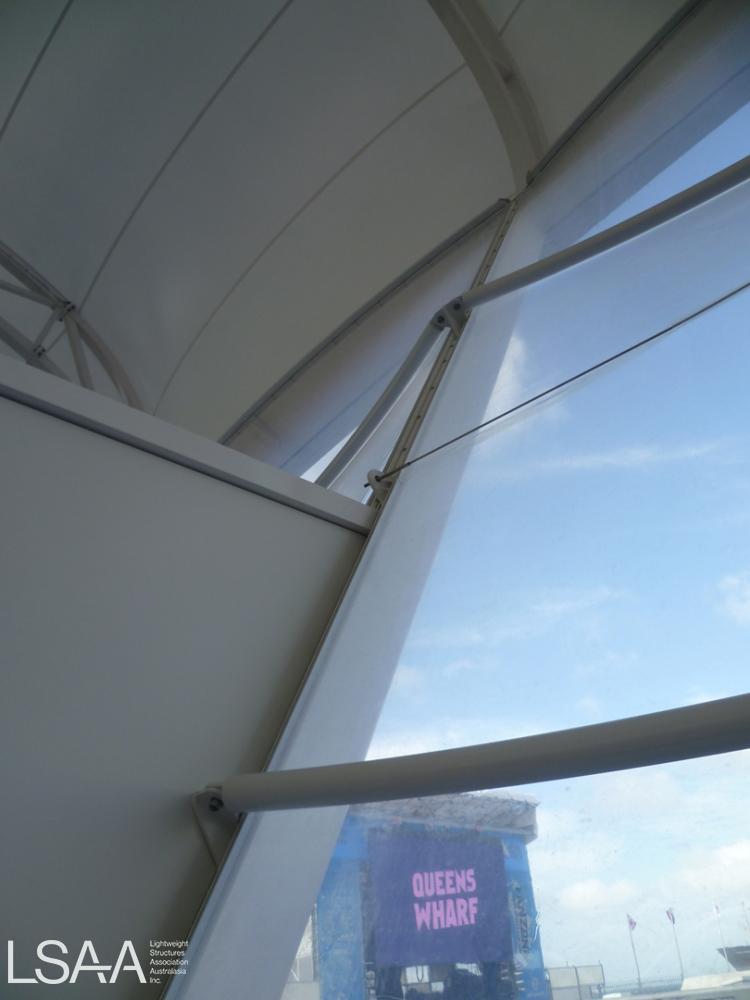 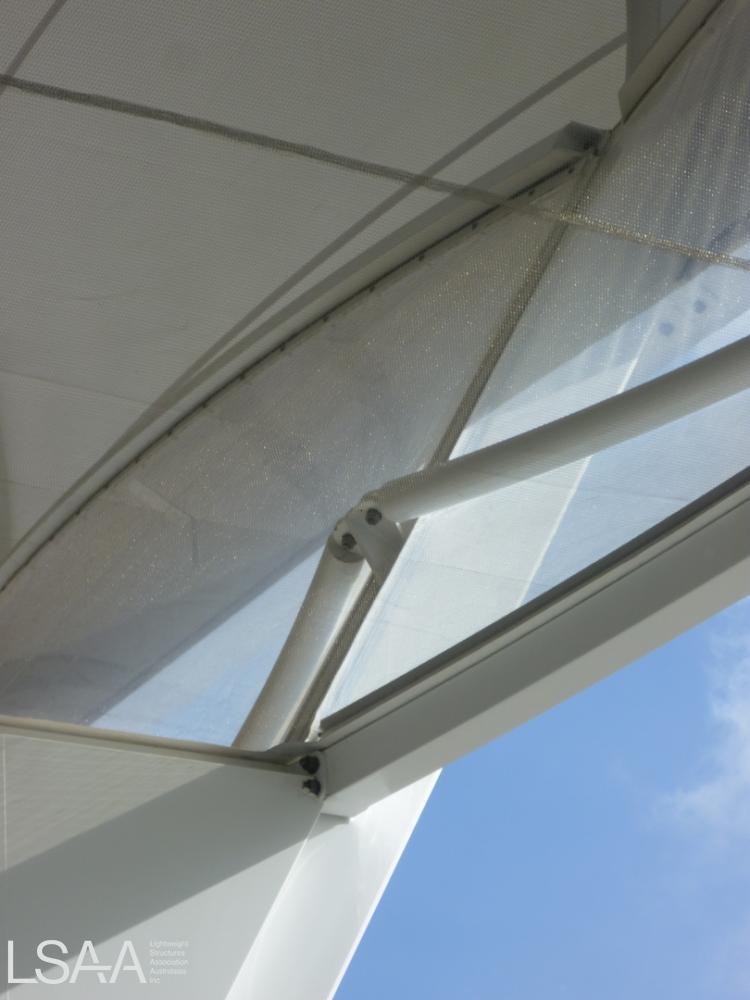 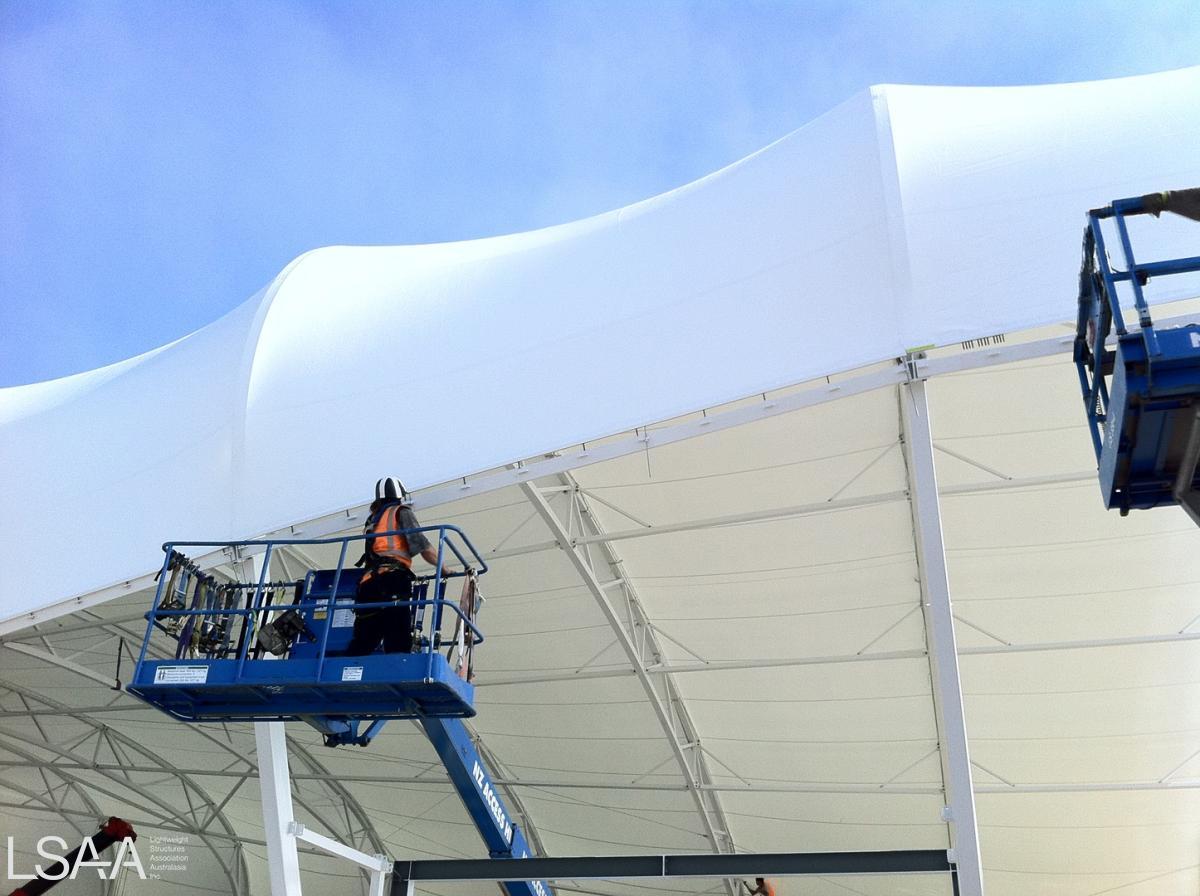 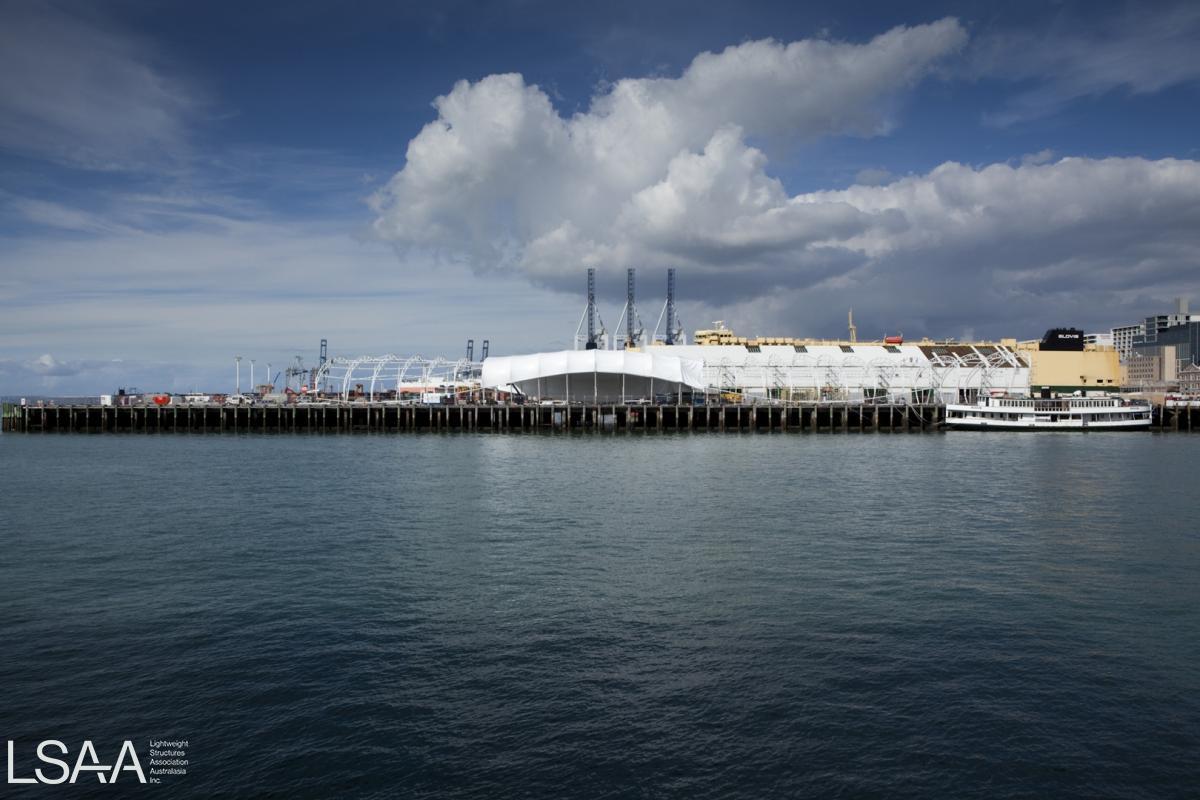 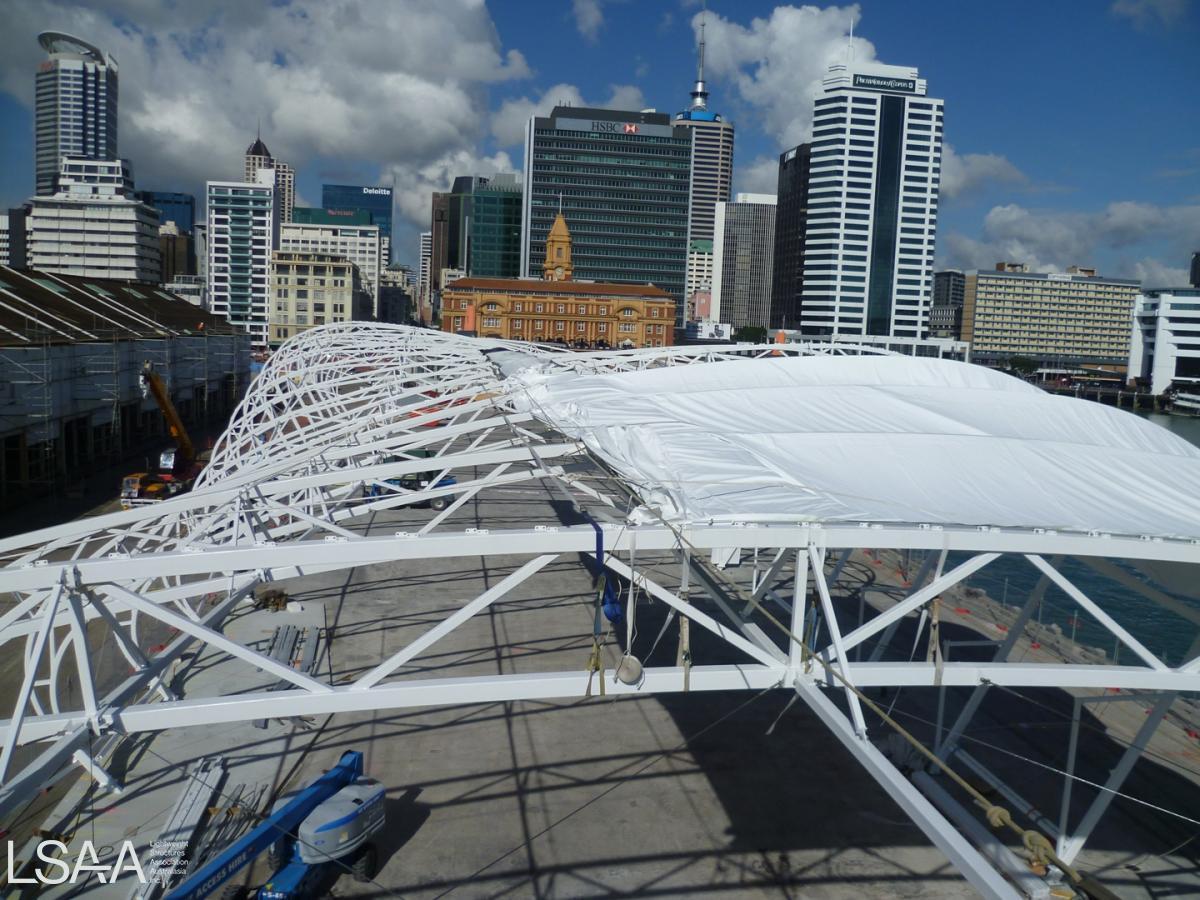 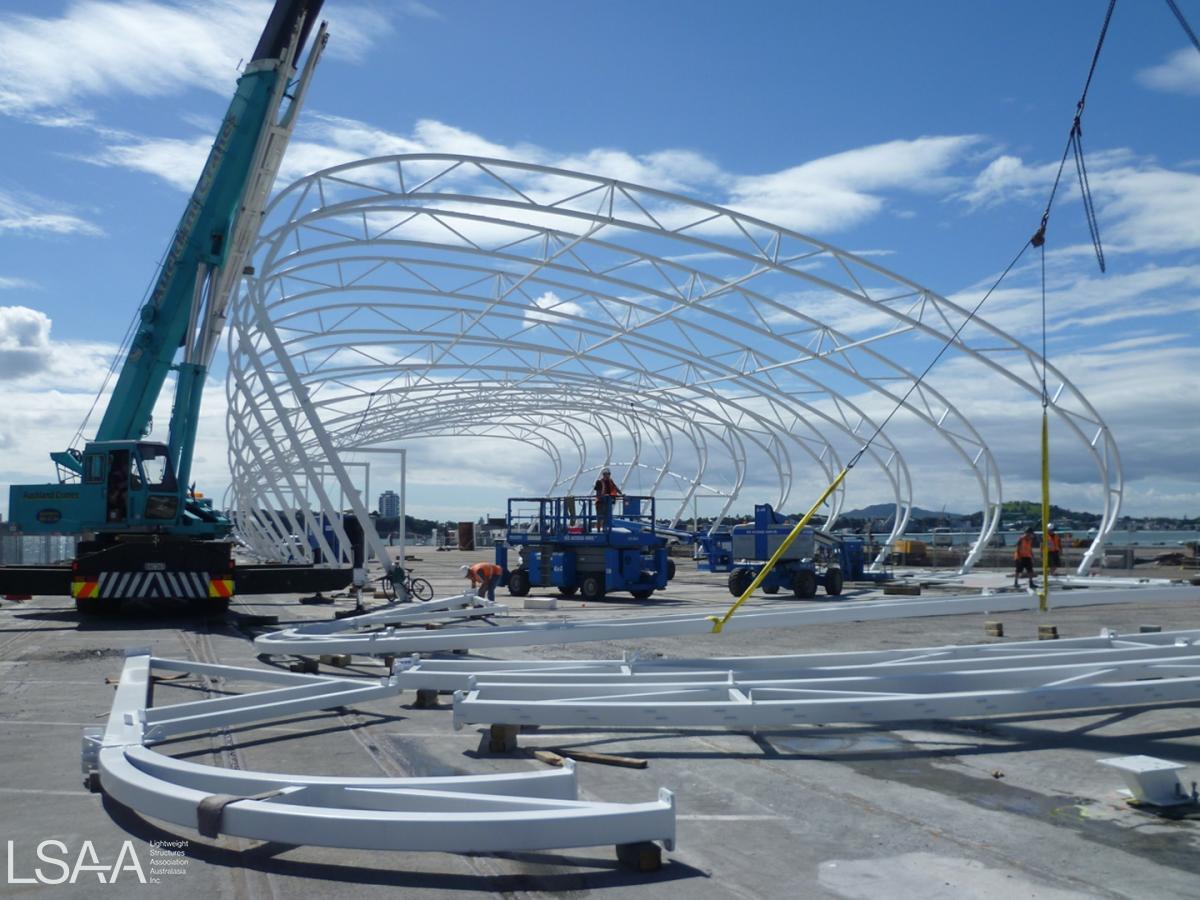 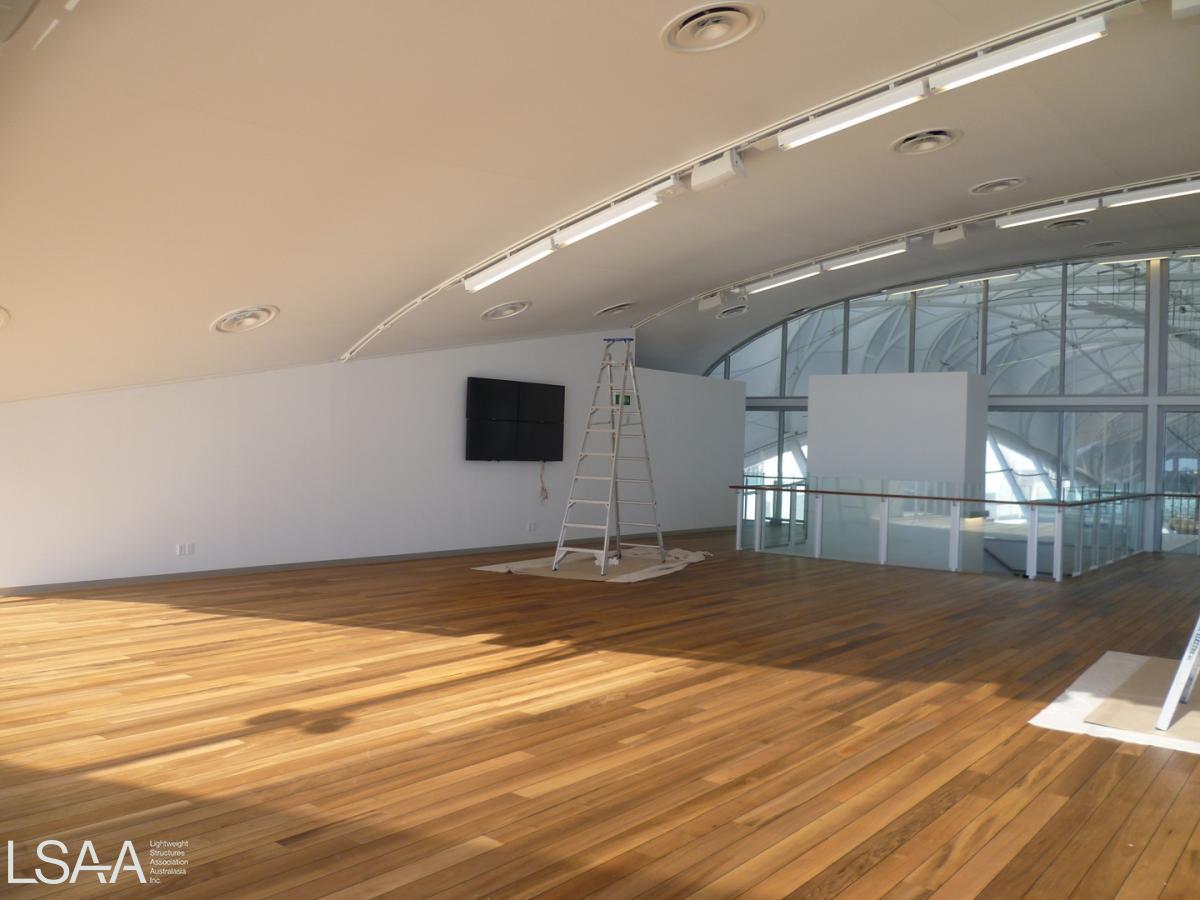 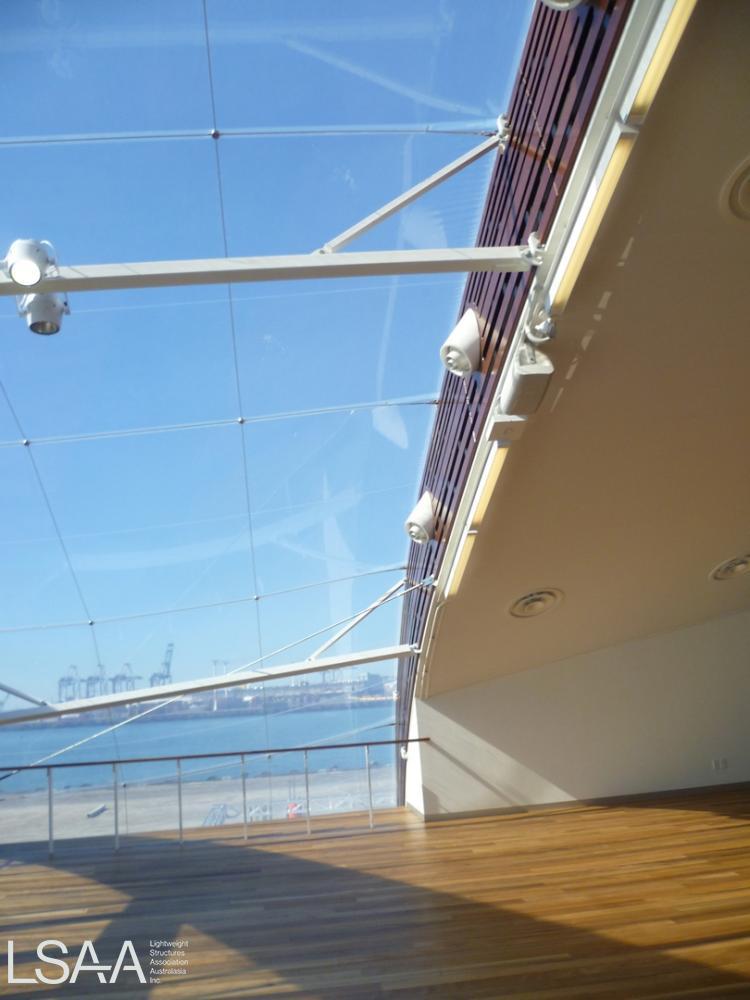 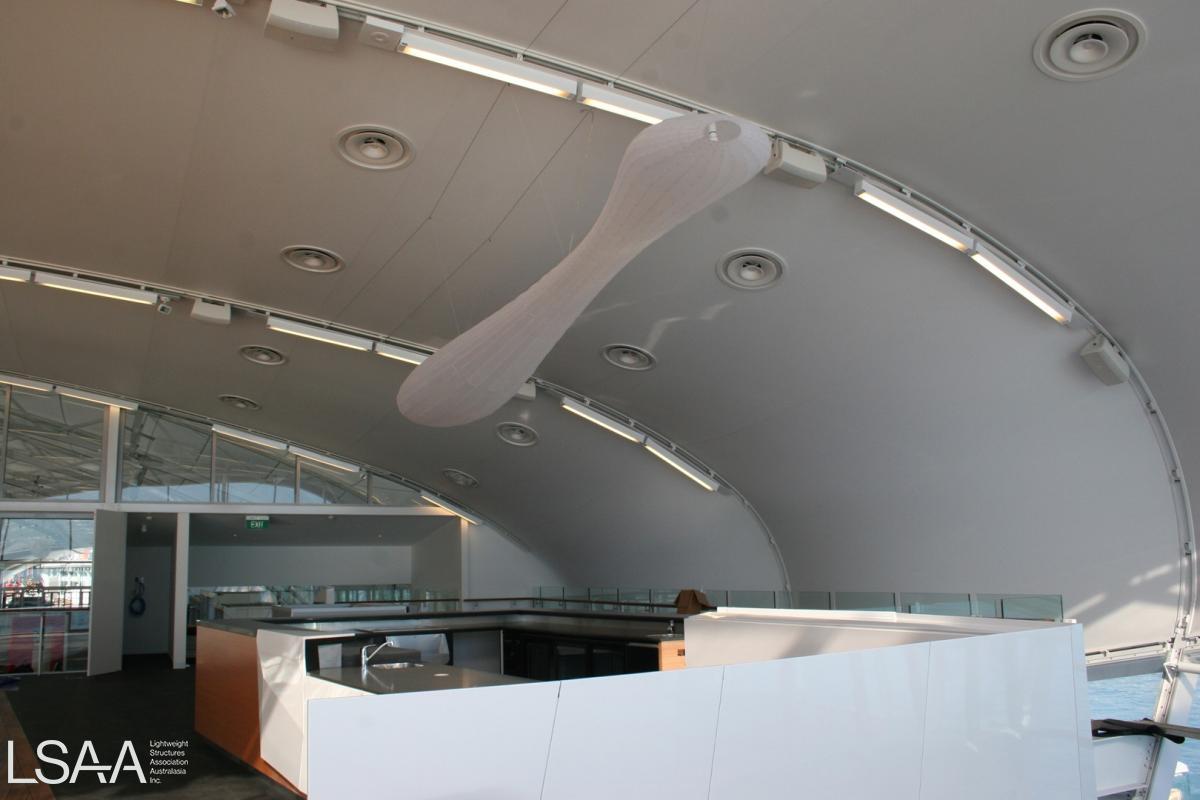 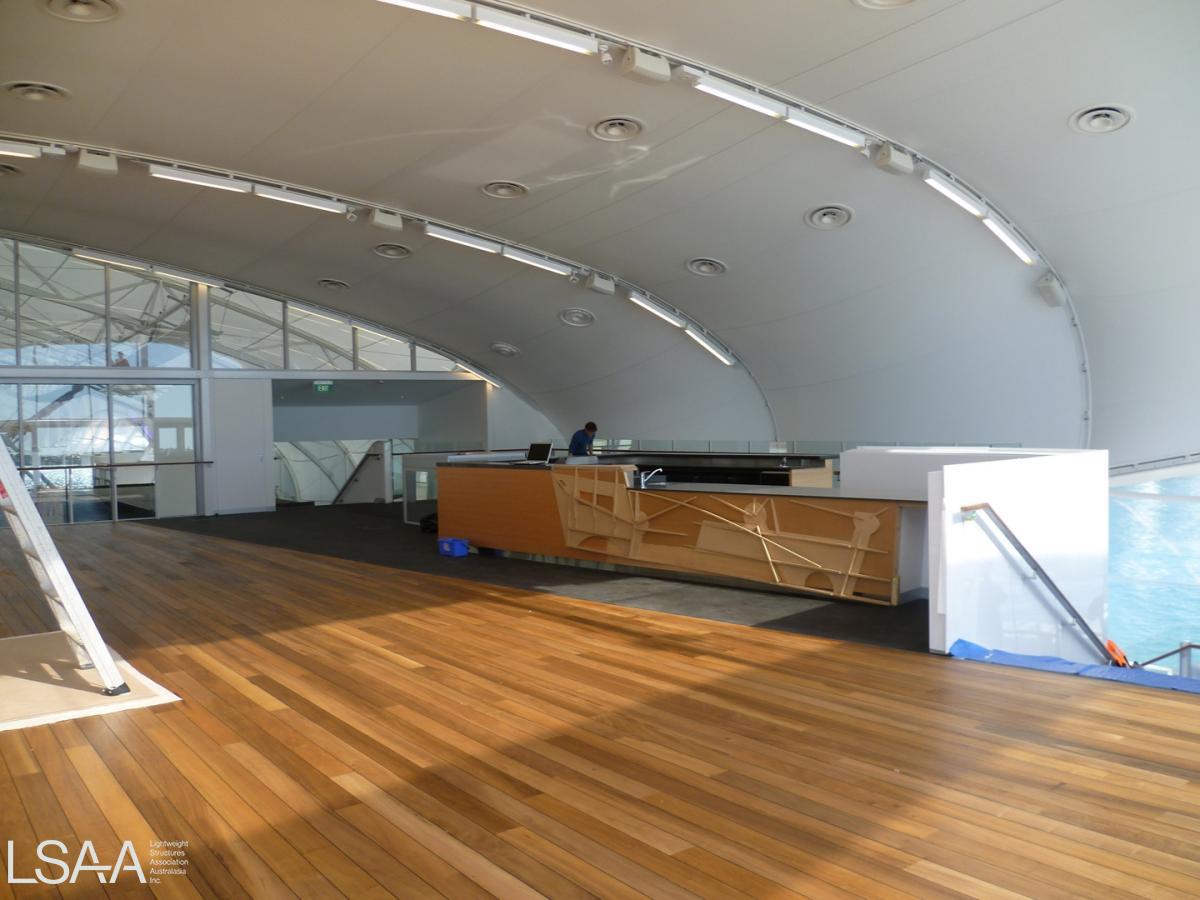 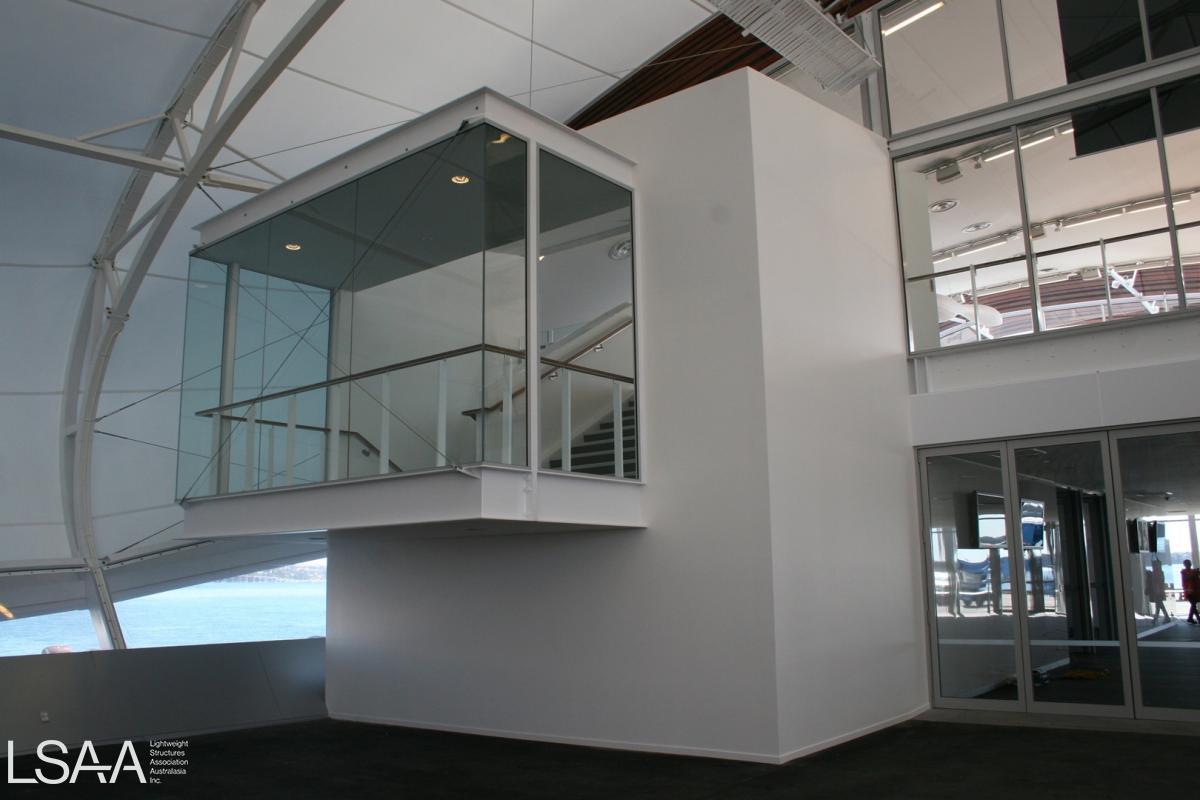 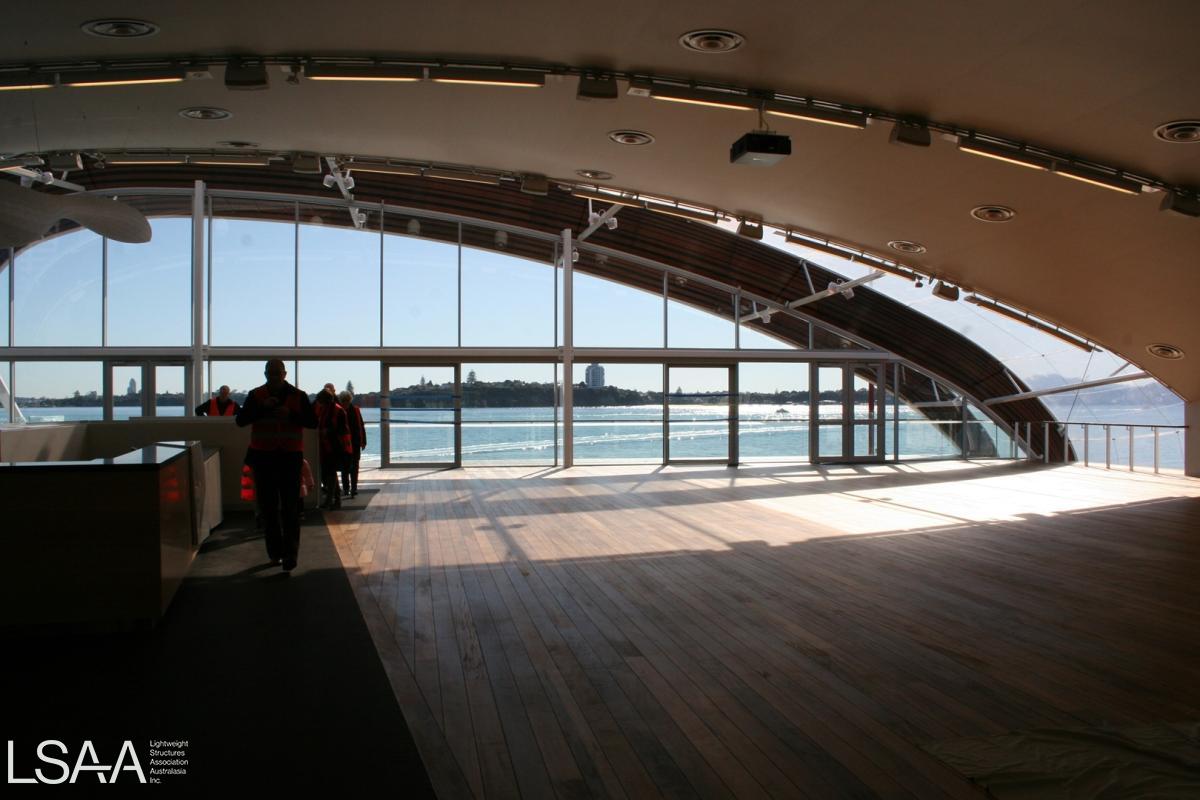 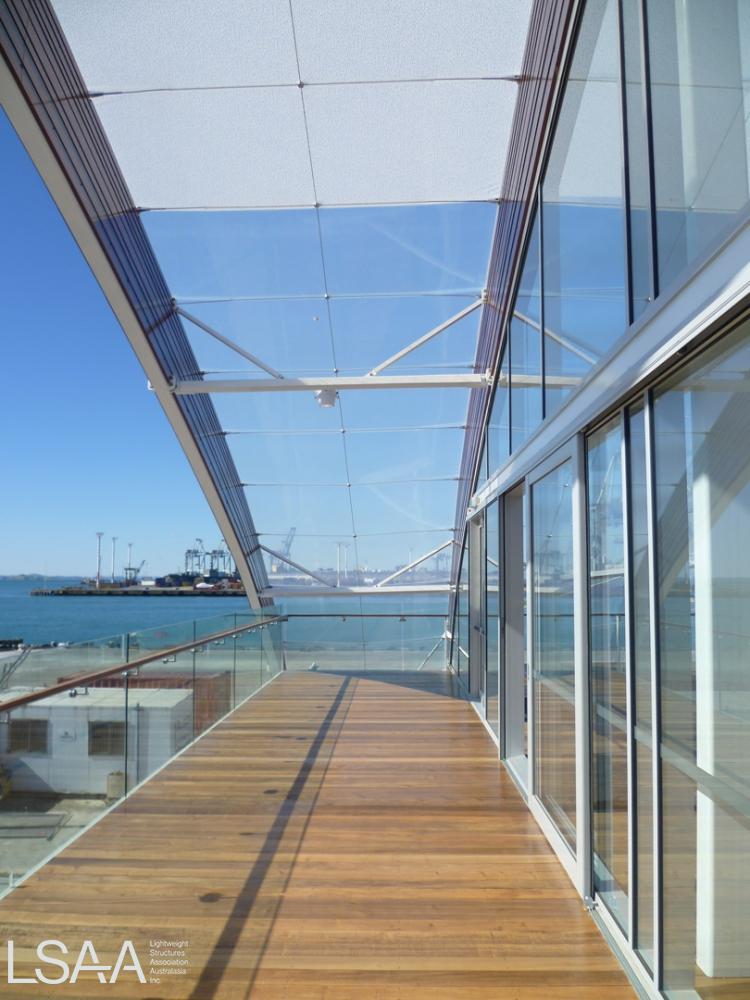 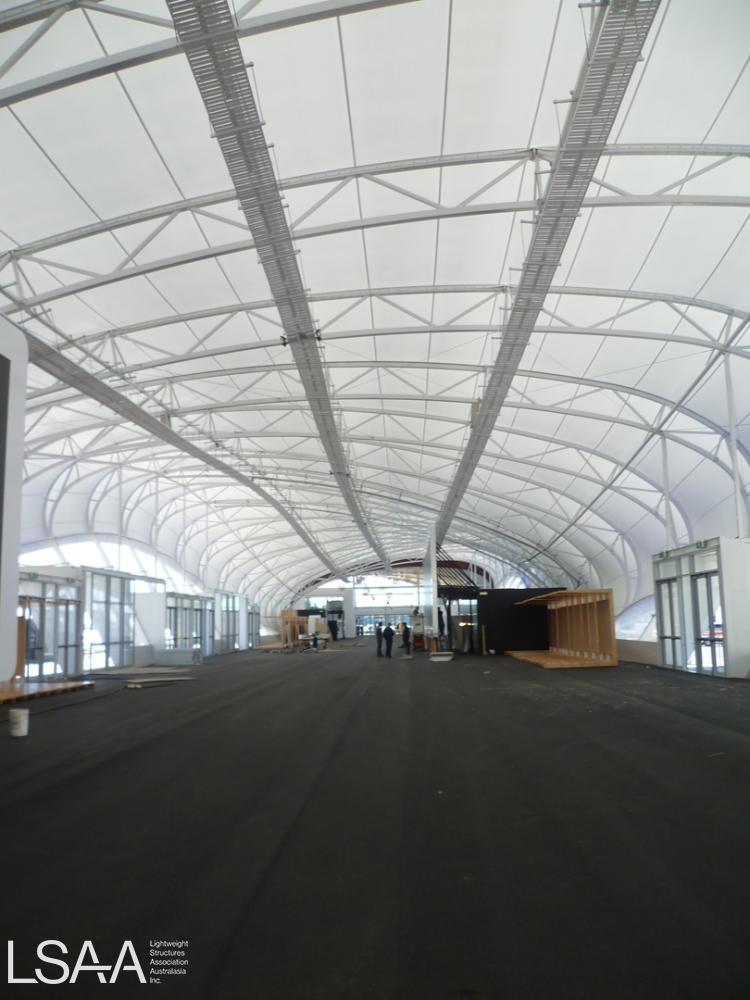 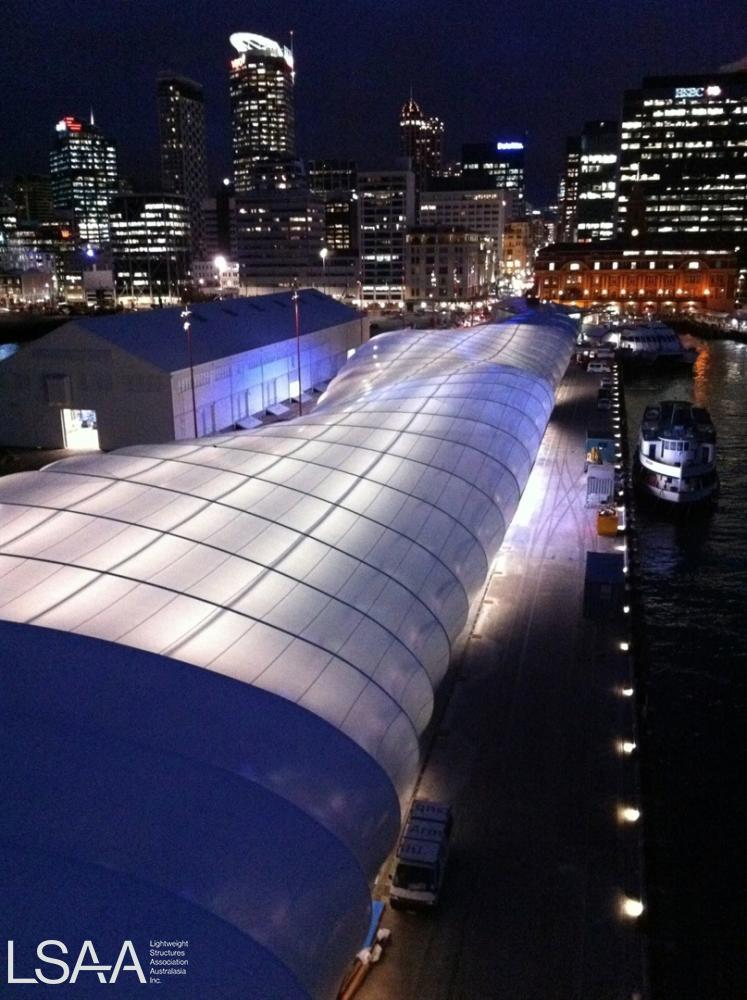 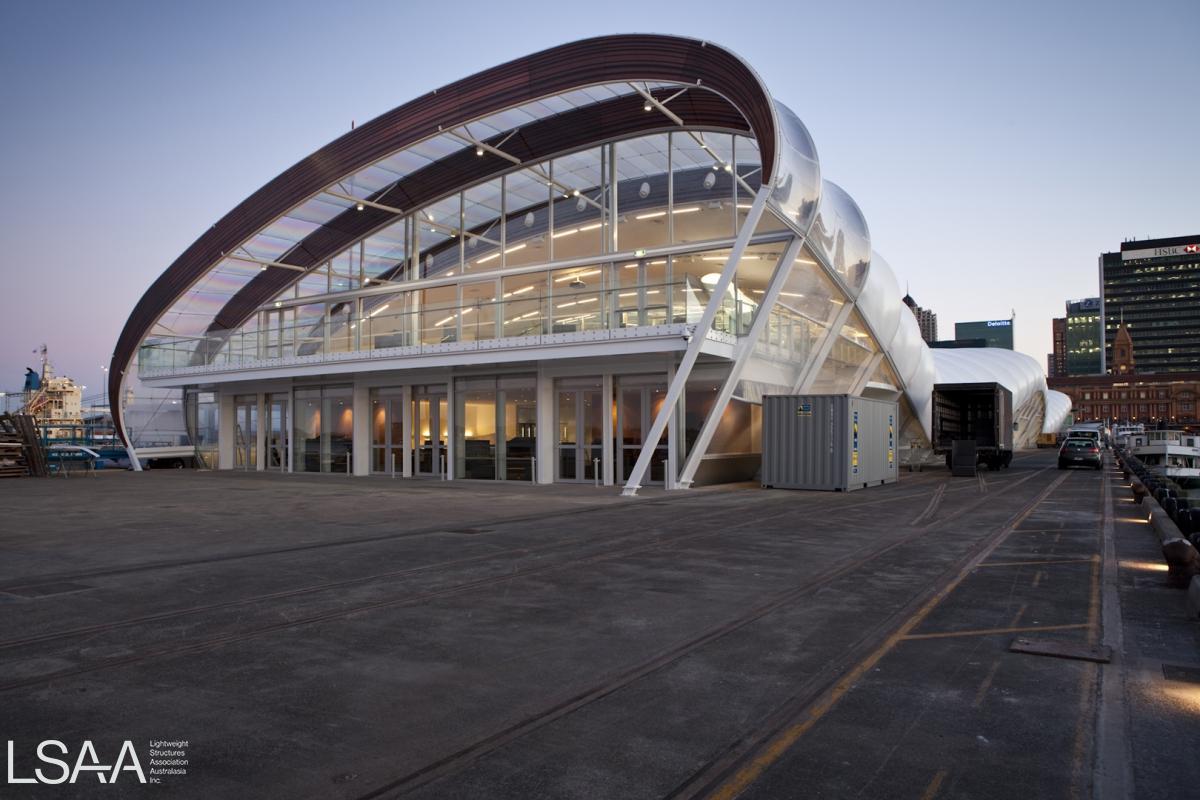 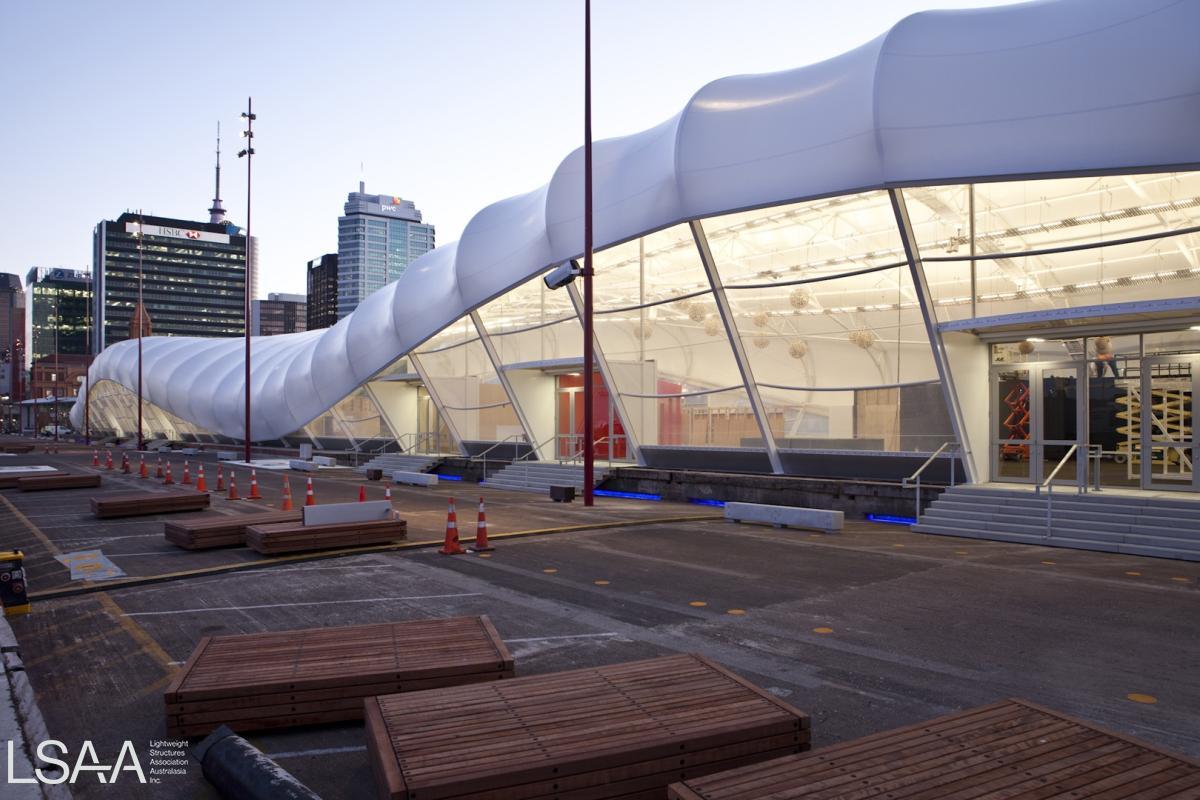 Its' ground floor area can be split into four segments, which means the building is able to cater for a range of showcase and festival events occurring at the same time. It also provides the ability for the fanzone to be scaled up or down according to demand. The mezzanine floor at the northern end of The Cloud is designed for VIP hosting.

In early 2010 Fabric Structure Systems (FSS) recognized an opportunity for a potential light weigh fabric structure to be built on Queens Wharf for accommodating 2011 Rugby World Cup (RWC) activities. Prior discussions & a design competition for developing a permanent structure on Queens Wharf had fallen short on being able to be developed in time for the RWC.

FSS successfully pitched the concept of a light weigh fabric structure to the NZ Government, that would meet the needs of the RWC and that could either be left on site for the future benefit of Auckland, or could be redeployed elsewhere in its entirety or broken down into up to four sections. The structure’s re-deployability was a key aspect in getting the project off the ground.

In October 2010 FSS were finally awarded a contract to build “The Cloud” at which point we teamed up with Jasmax architects & Fletcher Construction to deliver the mammoth project in a very tight program.

Jasmax were instrumental in arriving at the final form of the structure, while FSS & Wades developed the structural solution for the flowing bespoke shape of the Cloud. We employed similar concepts used on a previous project, where the structural trusses are of a consistent shape (for construction efficiency) while the organic shape of the Cloud is achieved my varying the height & angle of the columns.

A variety of cladding materials were used to accentuate the Cloud’s shape as well as serve functionally. A PVC fabric roof was used for speed of installation & deployability. ETFE was used in the wall panels & northern mezzanine roof panels for its window like appearance & minimal structural requirements. As the structure is naturally ventilated, a number of stainless mesh panels were installed to achieve 8% opening. Composite aluminum panels where used along the base of the building & to form entryways. Glazed joinery has been used for the northern & southern elevations as well as for entryways. PVC ceiling liners were installed in both the Southern entry atrium & northern mezzanine floor.

On the mezzanine floor Fletcher Construction took responsibility for the design & installation of the Cloud’s infrastructure that comprised, power, data, fire detection, hydraulics, toilets and fitout of the air-conditioned mezzanine areas between grids 28 to 33.

The main hall was finished as a multipurpose function space that gets fitted out on an event by event basis.

Due to the fast track nature of the project fabricators were under a lot of pressure to turn steel & fabric out & deliver to site. Installation of the structure started in the centre so that installers could break into two teams & work in both directions at the same time.

Although far from looking symmetrical, a key to the Clouds efficiency in fabrication, was the standardisation of all the trusses. The Cloud’s organic form is achieved by varying the columns length & angle. This was also important in fast tracking steel fabrication, so that standard truss blanks could be fabricated while individual grid shop drawings could be produced, showing all connection cleats & details.

Particular attention had to be made to sitting the building & laying out of columns. The higher loads of the northern mezzanine end of the Cloud proved very challenging to resolve, due to the limited loading capacity of the 100+ year old wharf. In the mezzanine area, mezzanine columns had to be coordinated with the wharfs own column layout, as the wharf’s mid span capacity was not sufficient to carry some of the resulting loads being generated by the Cloud in ultimate earthquake scenarios.

The fabric was selected for its durability & self-cleaning properties.

Clear ETFE was selected for the walls as a light-weight alternative to glass. Clear PVC was considered but was not suitable for its lack of clarity & long term durability. The curved shapes possible from using ETFE also added the design form of the structure.

Clear & fritted ETFE was used on the last two bays over the mezzanine floor to achieve a sense of connection between the plush interior & the harbour.

Woven 316 mesh with PVC keder edging was used to form ventilation panels above door ways & incorporated into the highpoint of the southern elevation. (Supplied by Star Screens Australia)

SEFAR rigid welded 316 mesh was used to form the ventilation slot in the side eves of the building.

All steel is finished in an Interthane 2 pot paint system.

Fabric –                 All PVC fabric membranes were completed in FSS’s Whangarei workshop. FSS utilizes an Aeronaught plotter cutter, for the cutting of fabric panels. With Ferrari’s T2 surface coating, all edges are abraded prior to welding.

Steelwork -            Production of steel shop drawings proved to be a very time consuming exercise due to the share number of individual component pieces. To get a jump on steel fabrication standard truss blanks were fabricated ahead of full shop drawings being completed. Once shop drawings were issue the respective connection cleats could be quickly added & then dispatched to the paint shop.

With the production of steel shop drawings on the projects critical path, close collaboration was required between the design leader, structural engineer & shop detailer, who were spread between Auckland, Brisbane & Napier. Skype conferencing & screen sharing was the only way that this project was completed on time. For example, ideas for connection details could be easily discussed on screen between the team, on screen sketching tools would further help to convey ideas & get clarity of thoughts. With the whole team working full time on the project, every one ensured they were readily available to be called upon to join Skype calls, even with the time differences between NZ & Australia.

Although the Cloud truss grids formed awkward profiles when laid up on the ground & were asymmetric in form, which required careful treatment when craned, we were still able to employ our typical installation methodologies.

The relatively tight curves of the fabric haunches made installation of the fabric membranes challenging & required careful attention when tensioning, to ensure panels were correctly set.