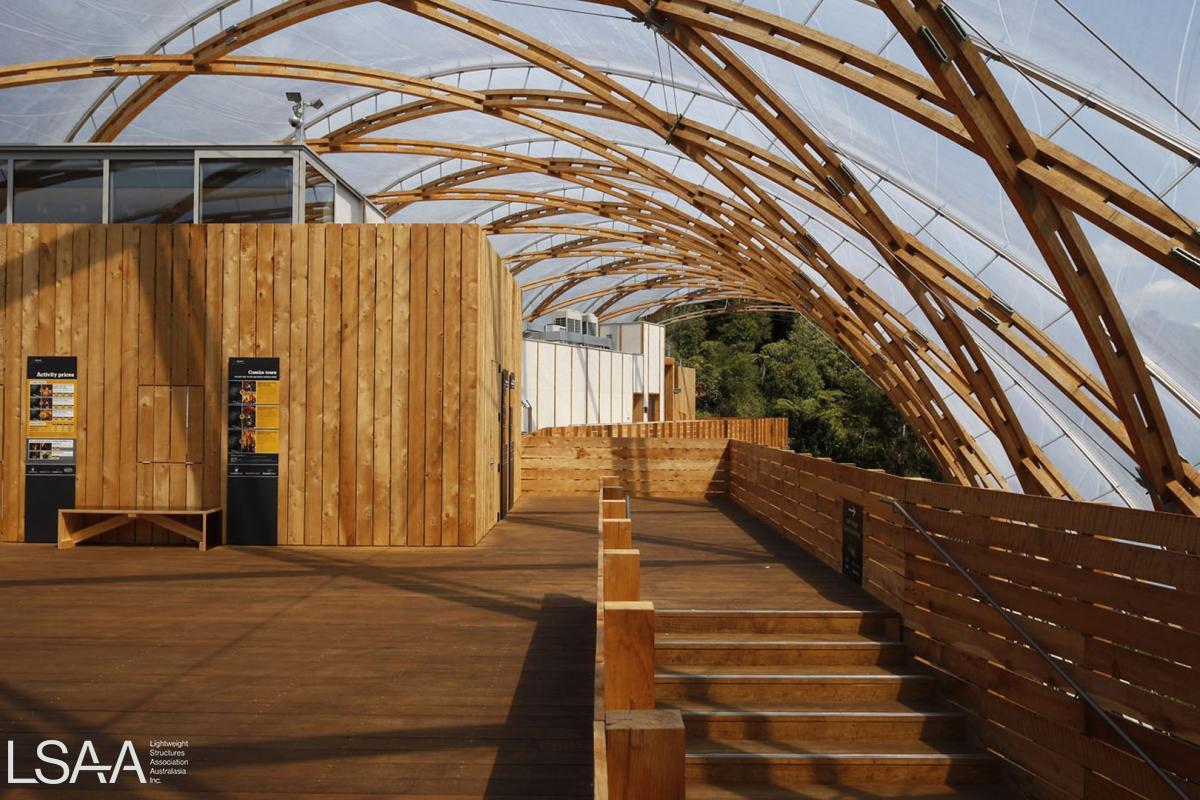 Sheltered below an innovative woven timber canopy, new amenities for visitors to the Waitomo Caves includes tourist gathering areas, 250-seat dining, retail, seminar and exhibition areas as well as a café and theatre for Tourism Holdings Ltd (Fig.1). (Note: These Figures / drawings are not available)

The cave entrance is accessed from the car park on the upper path while a lower path returns the visitors back alongside the stream exit (Fig. 2). Between these paths the amenities were accommodated within a simple base structure that extended the contours of the land (Fig. 3). The form of the base is distinguished and separate from the curved geometry of the overhead canopy. 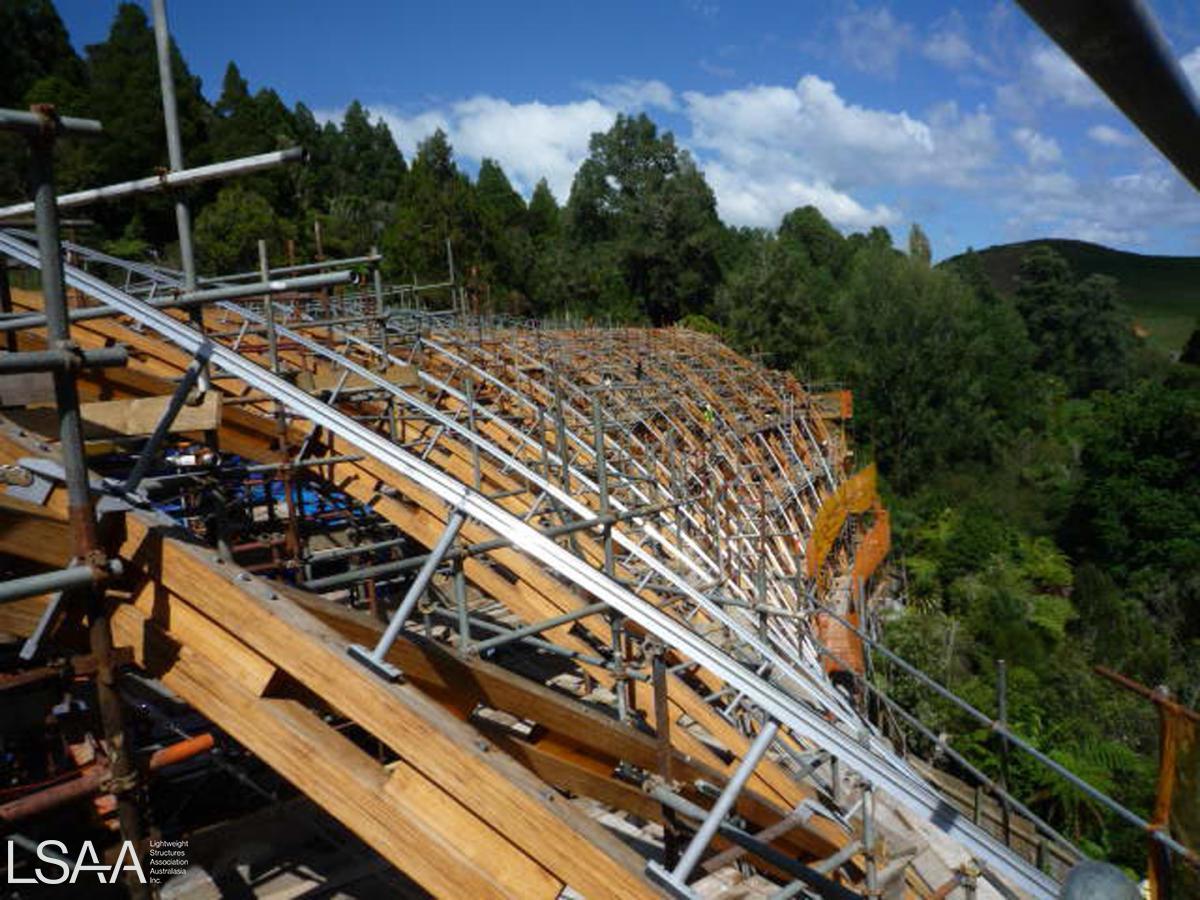 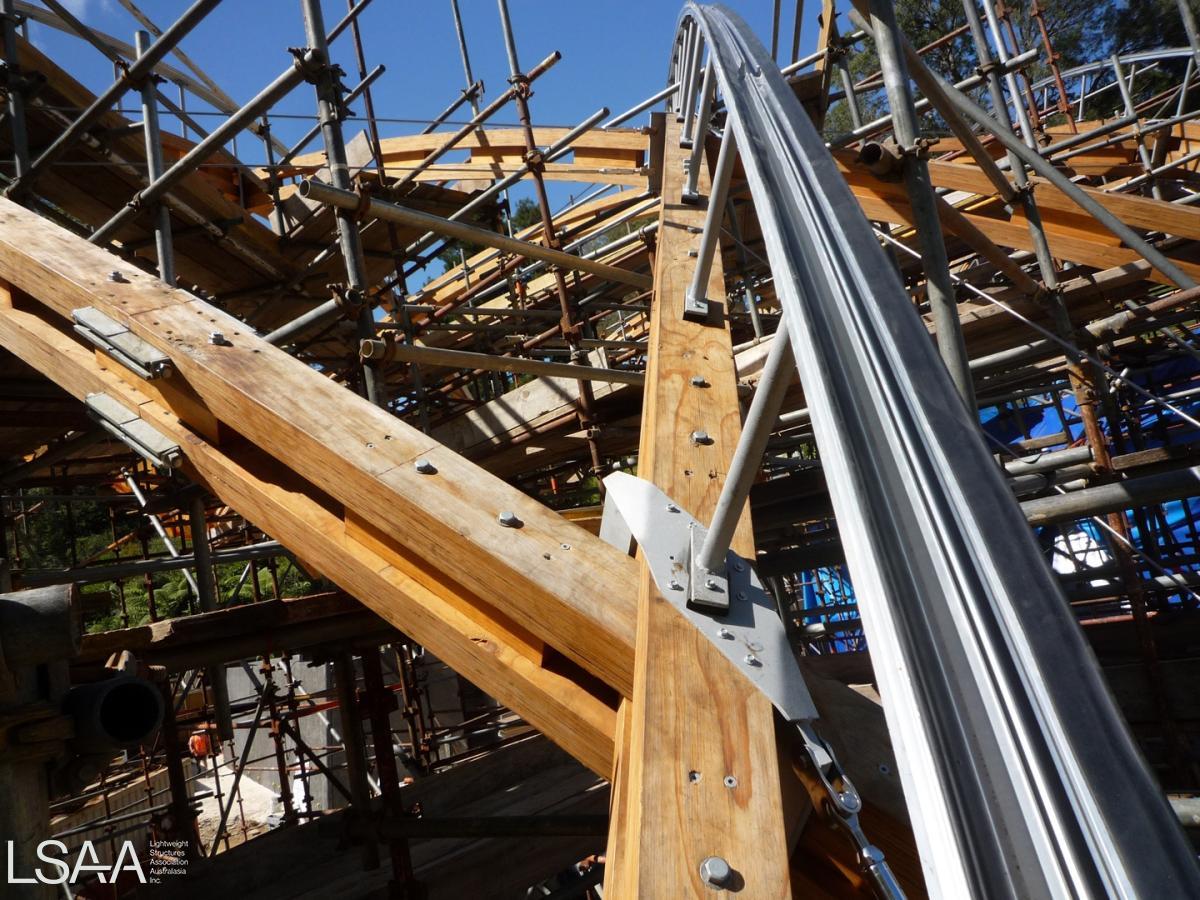 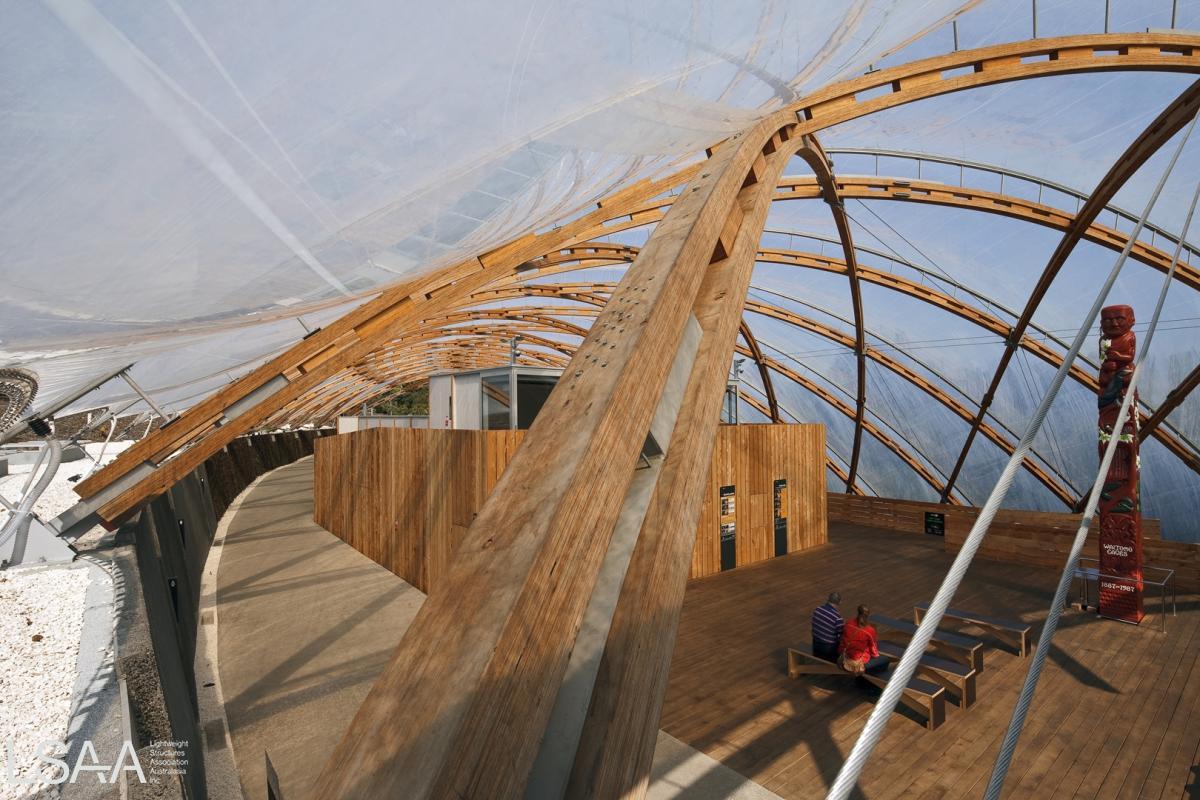 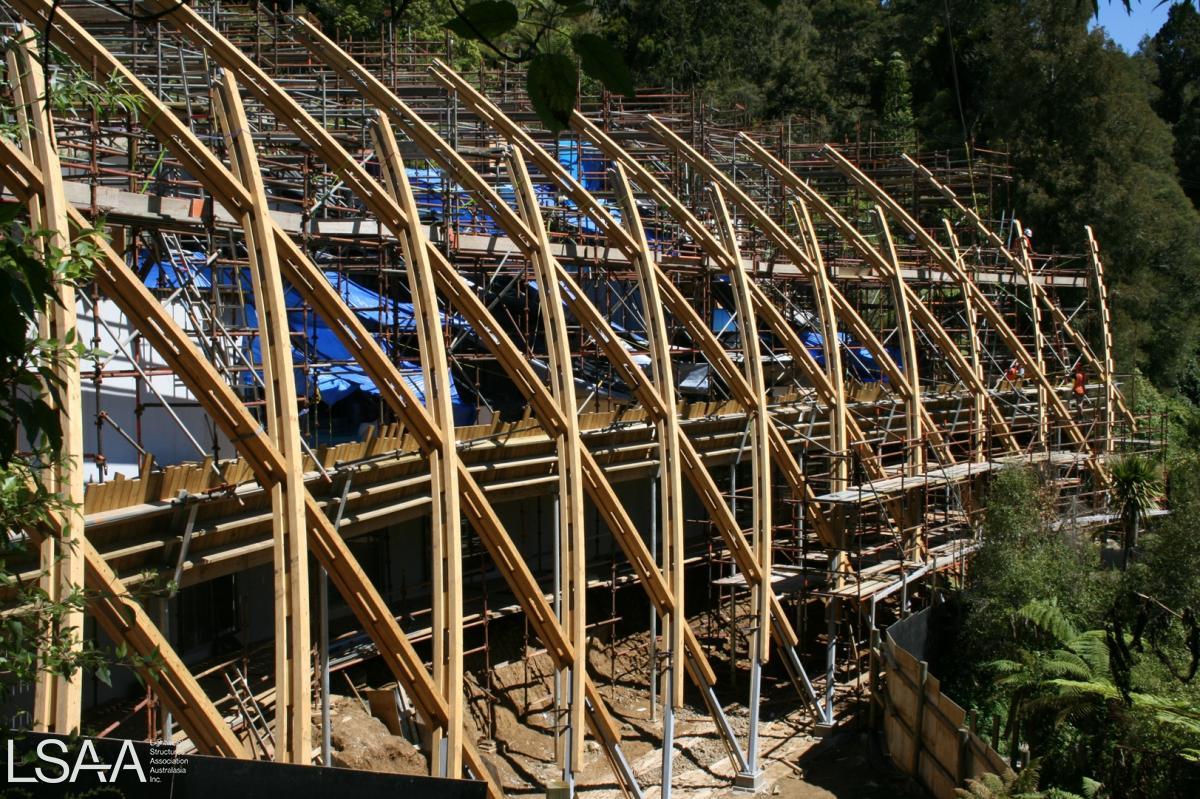 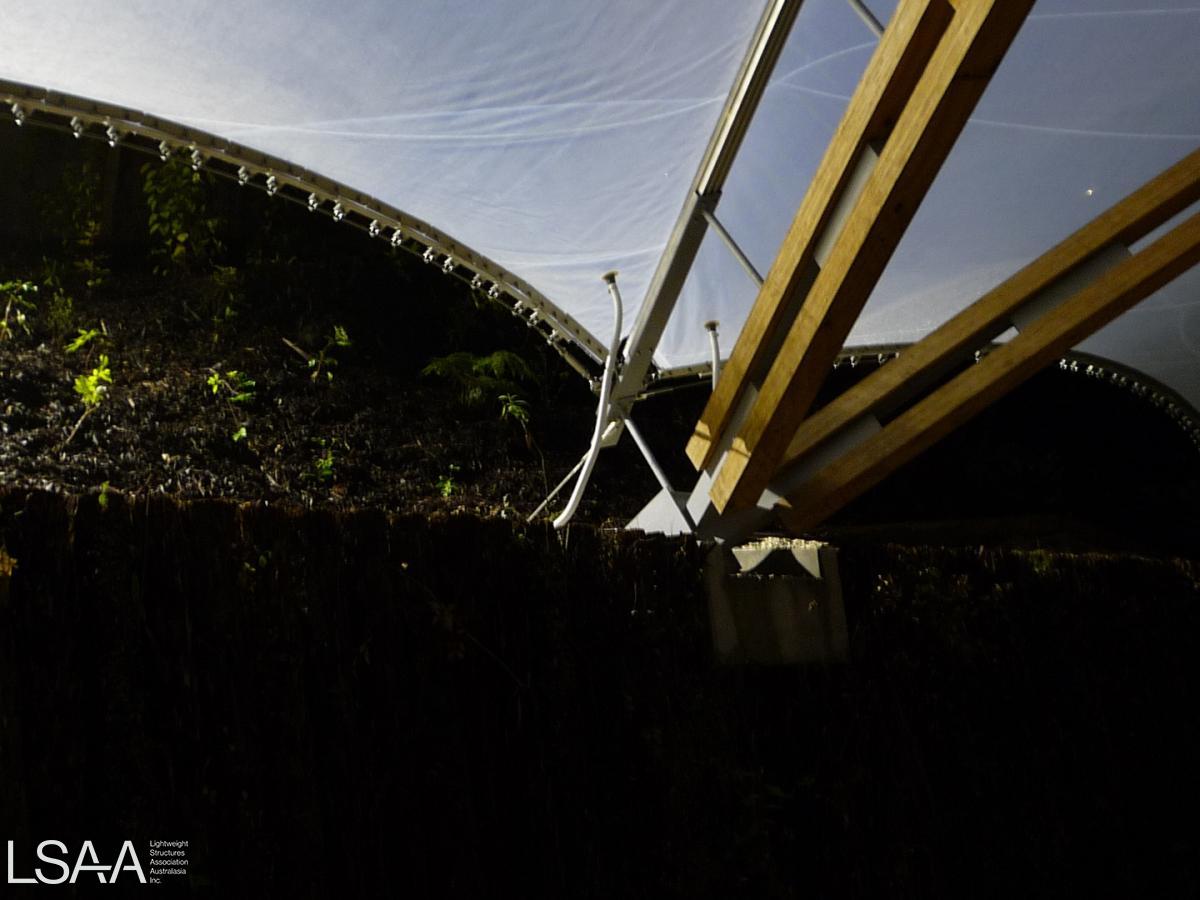 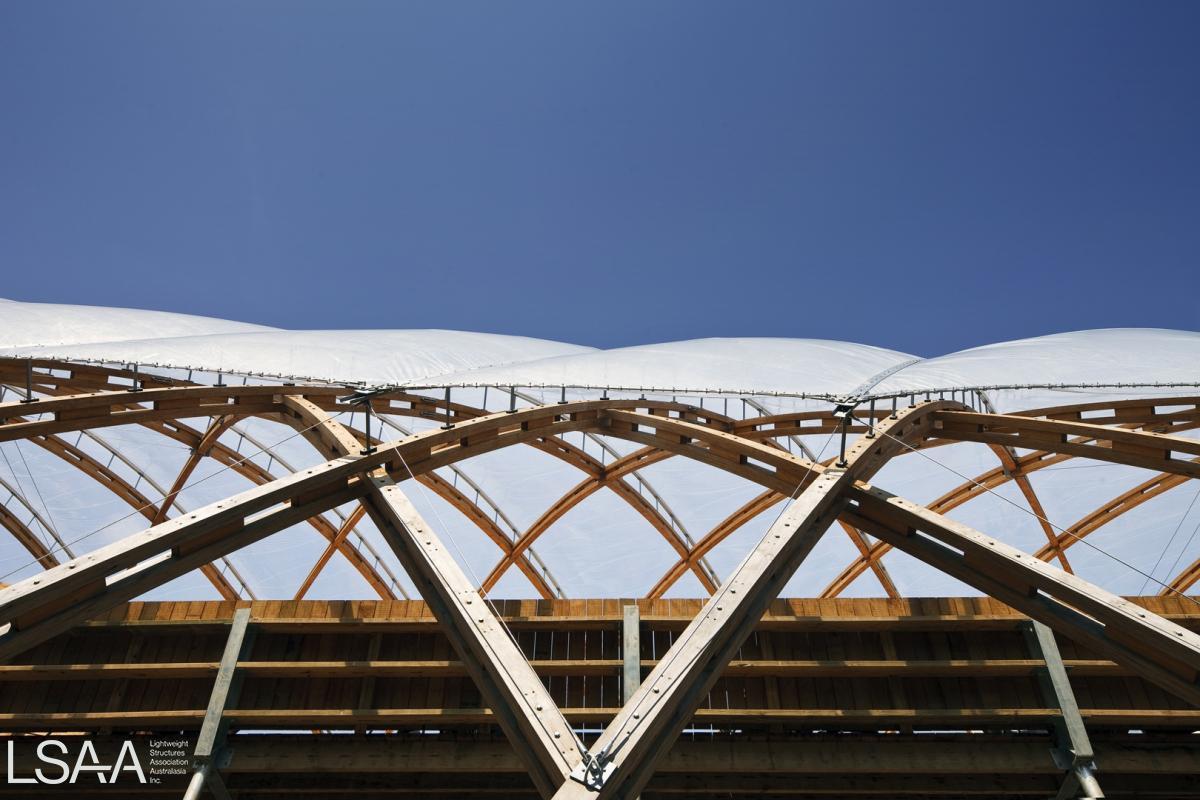 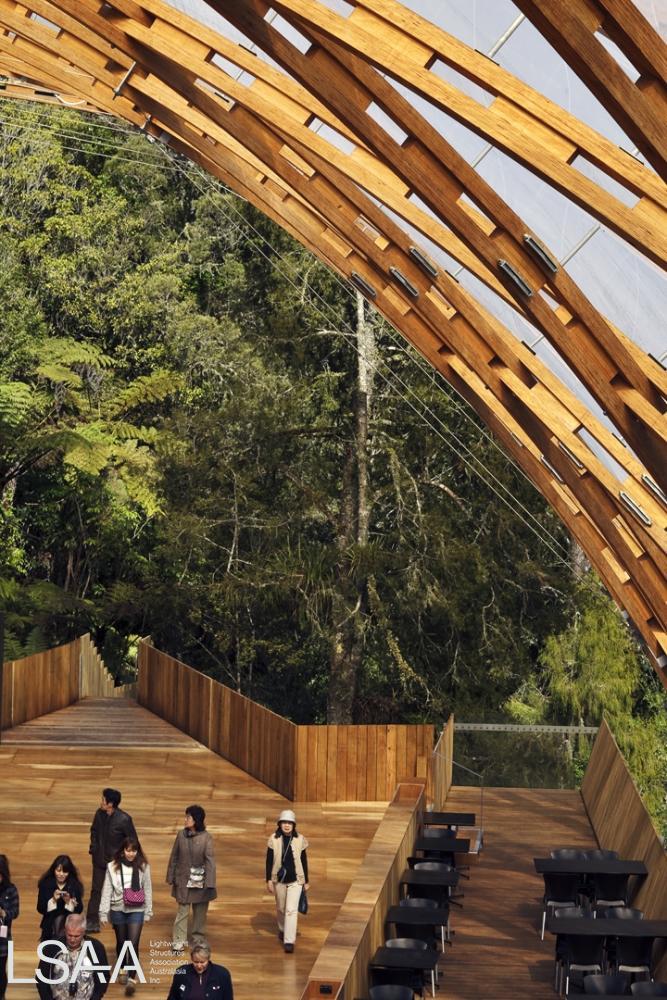 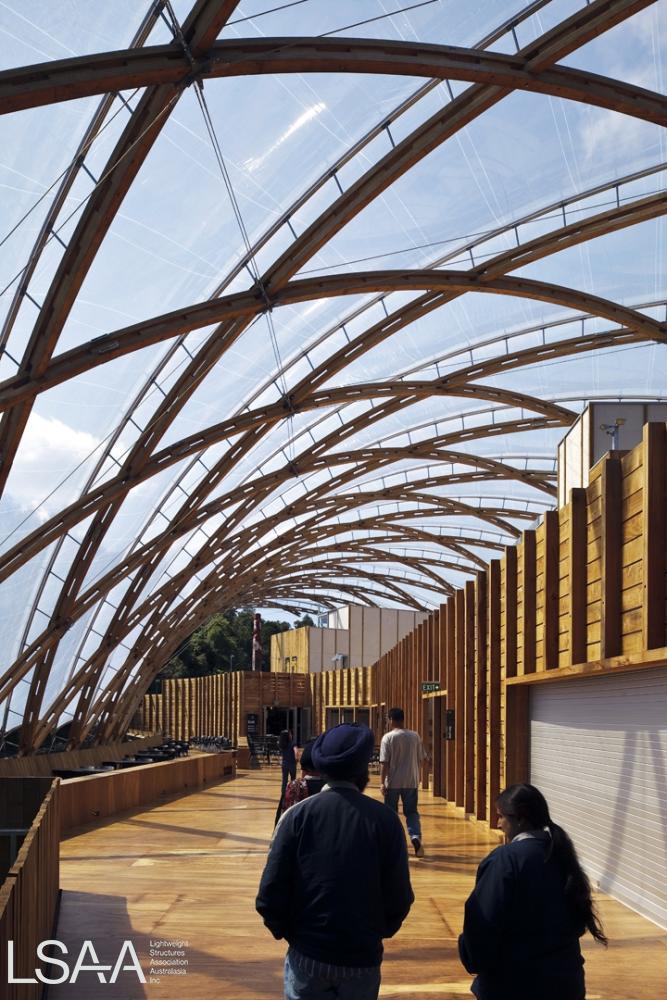 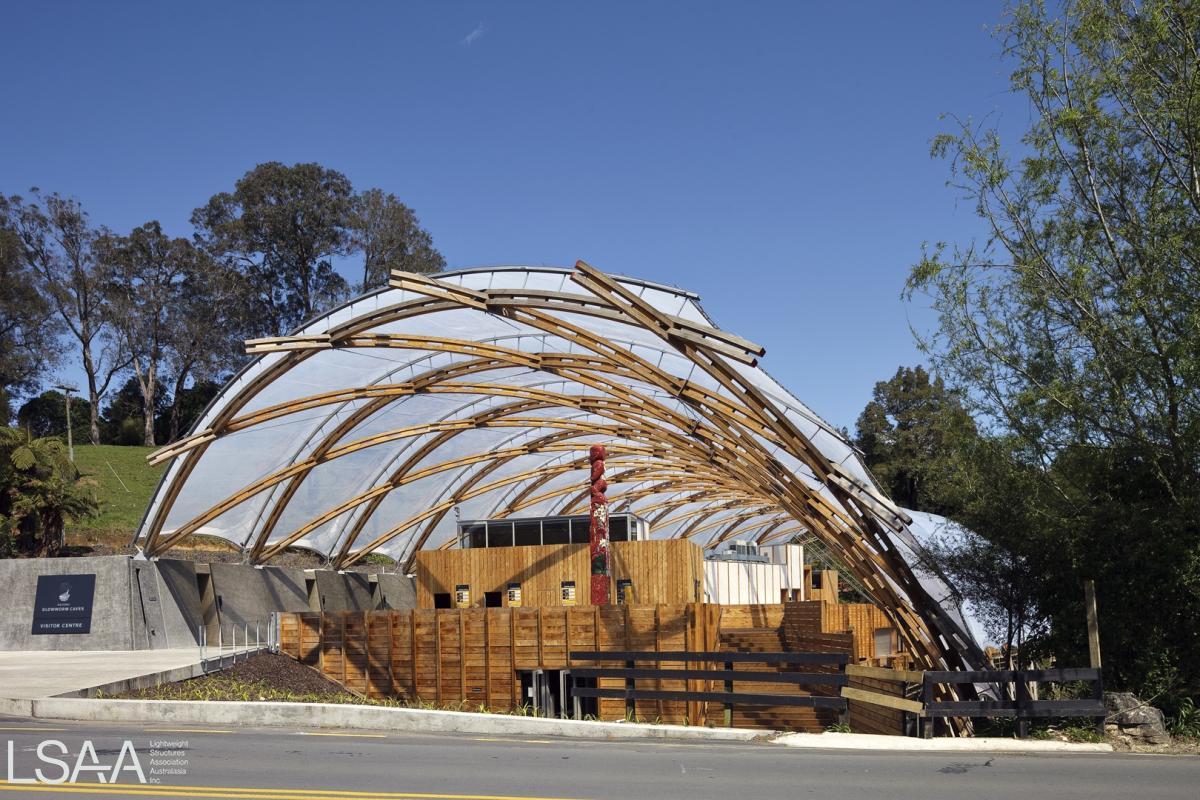 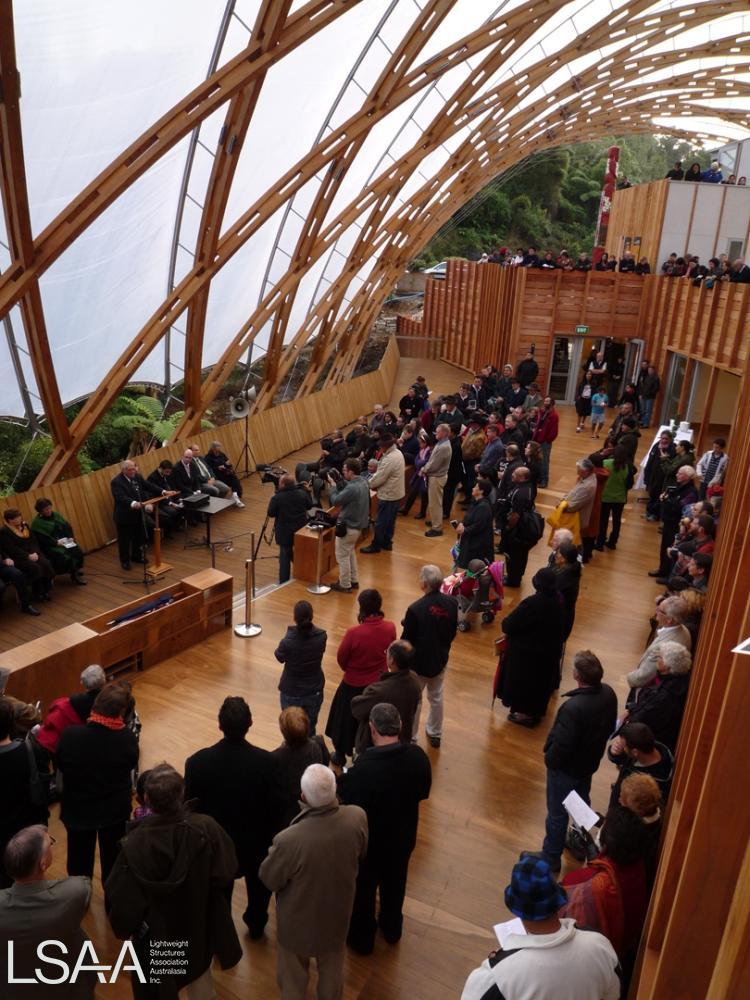 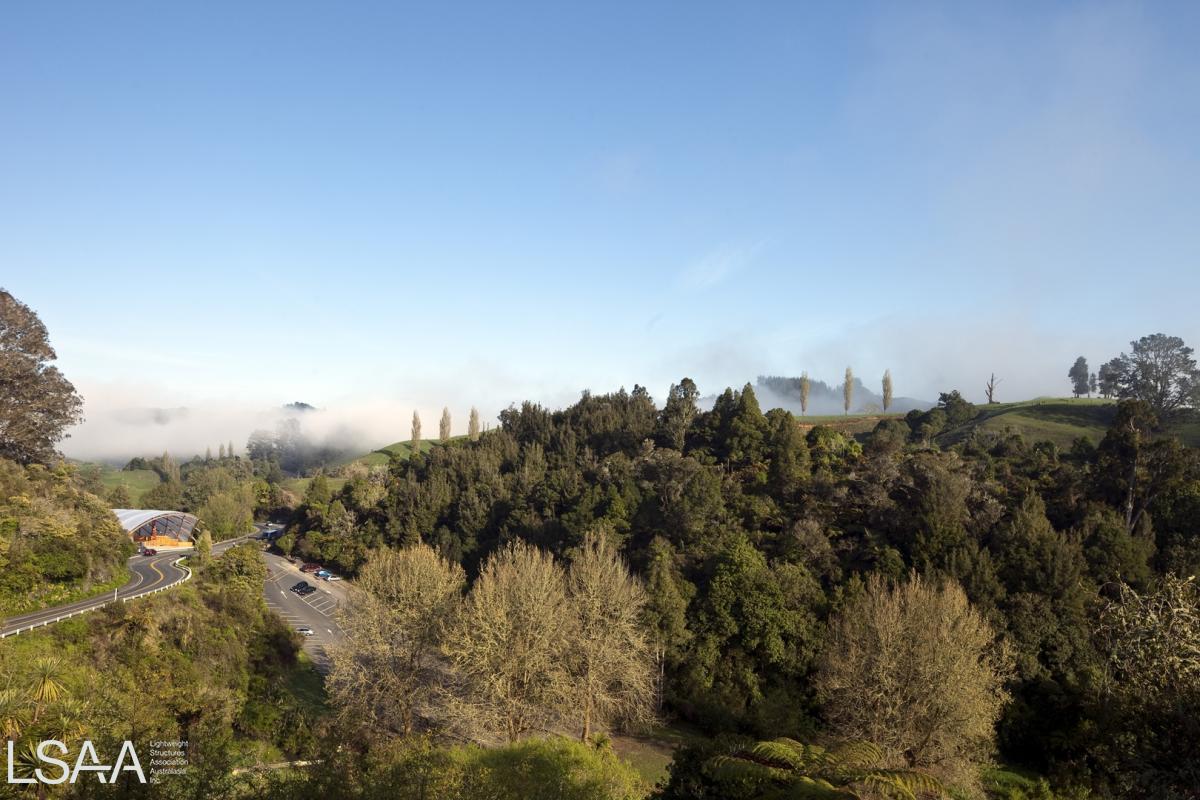 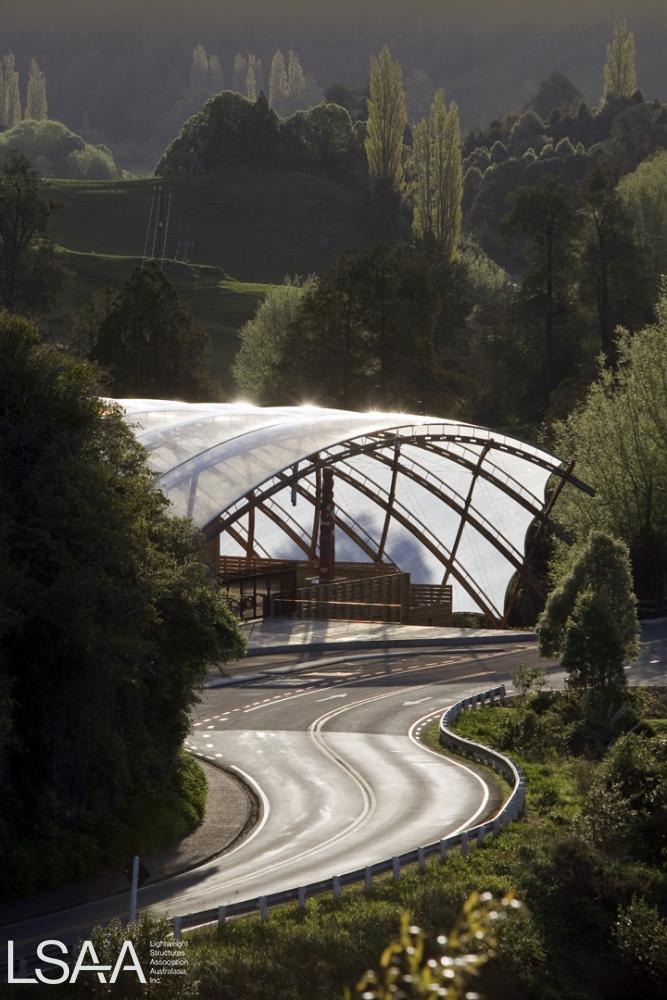 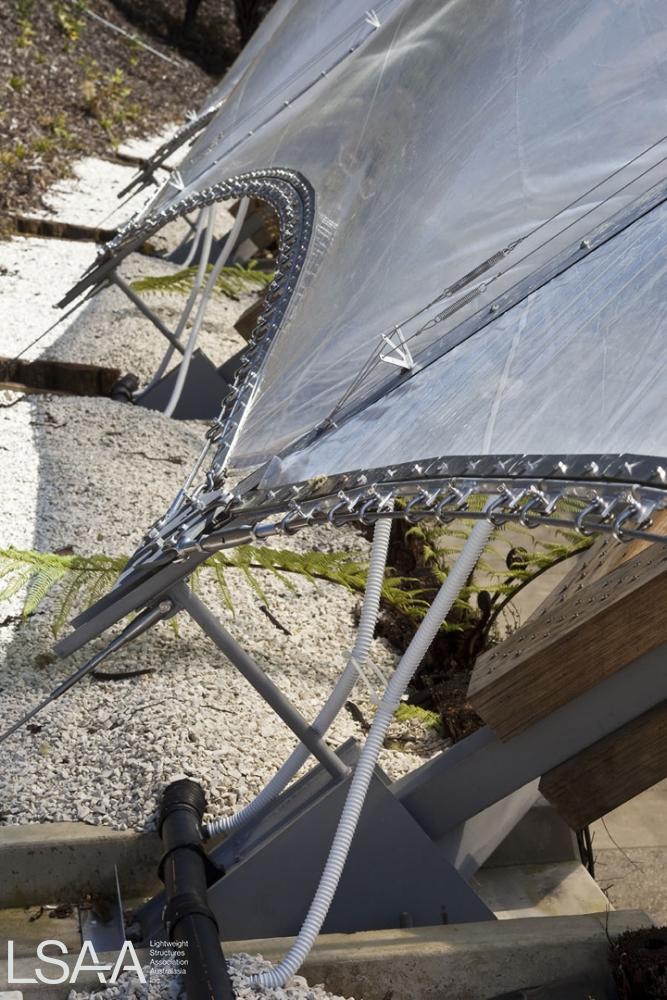 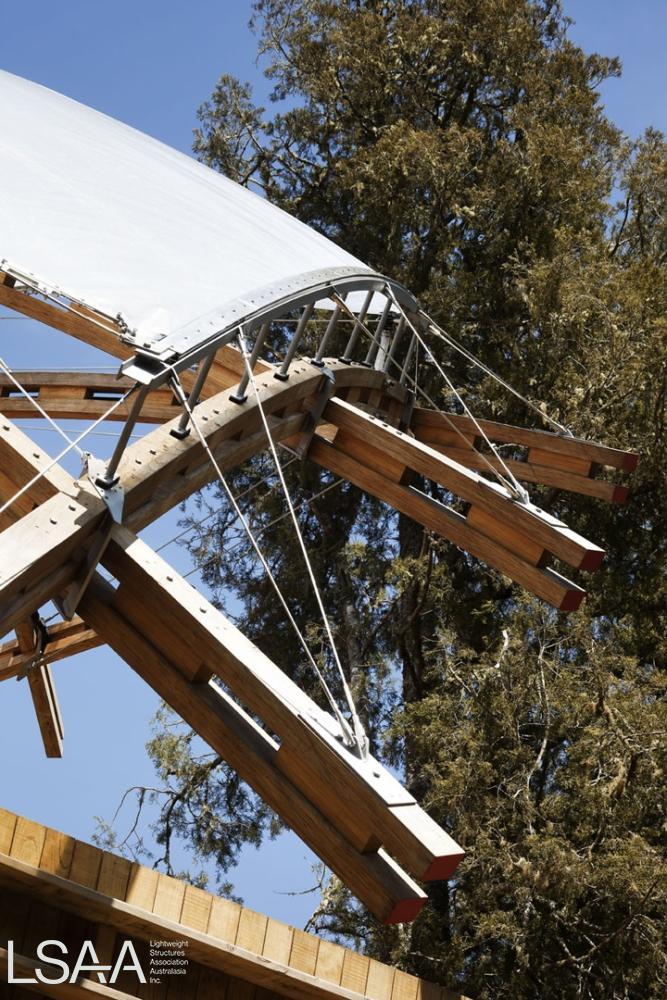 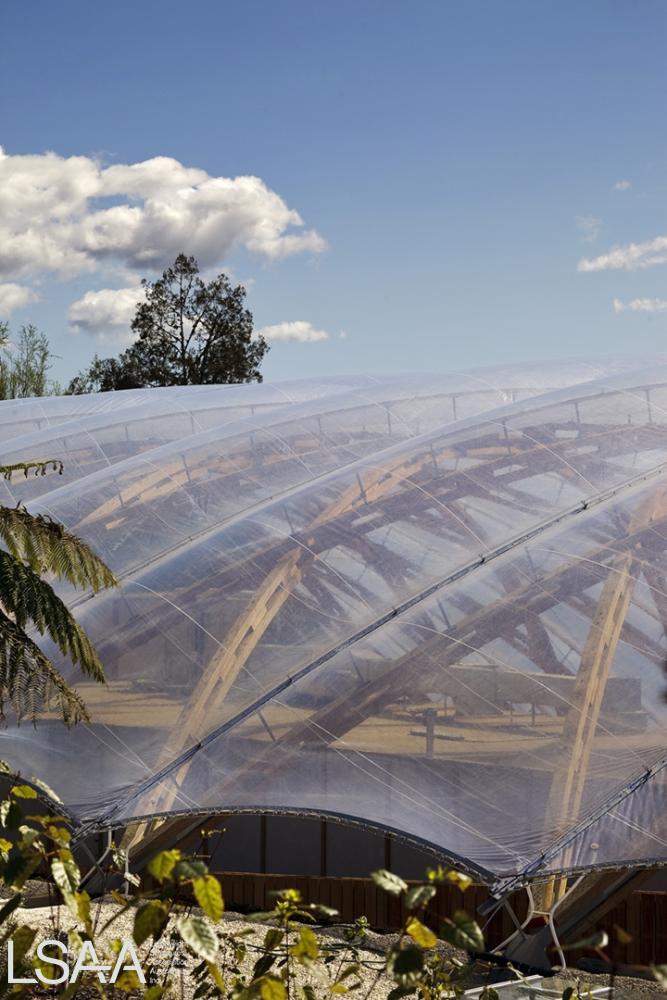 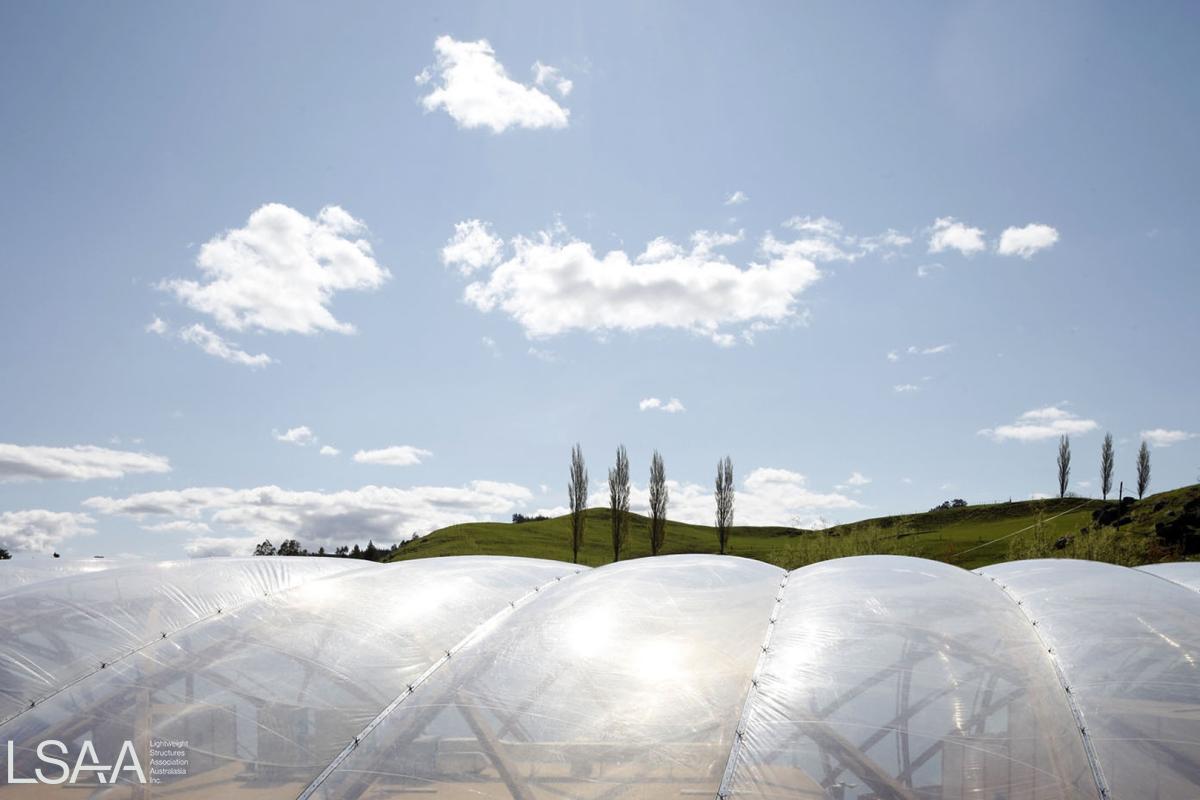 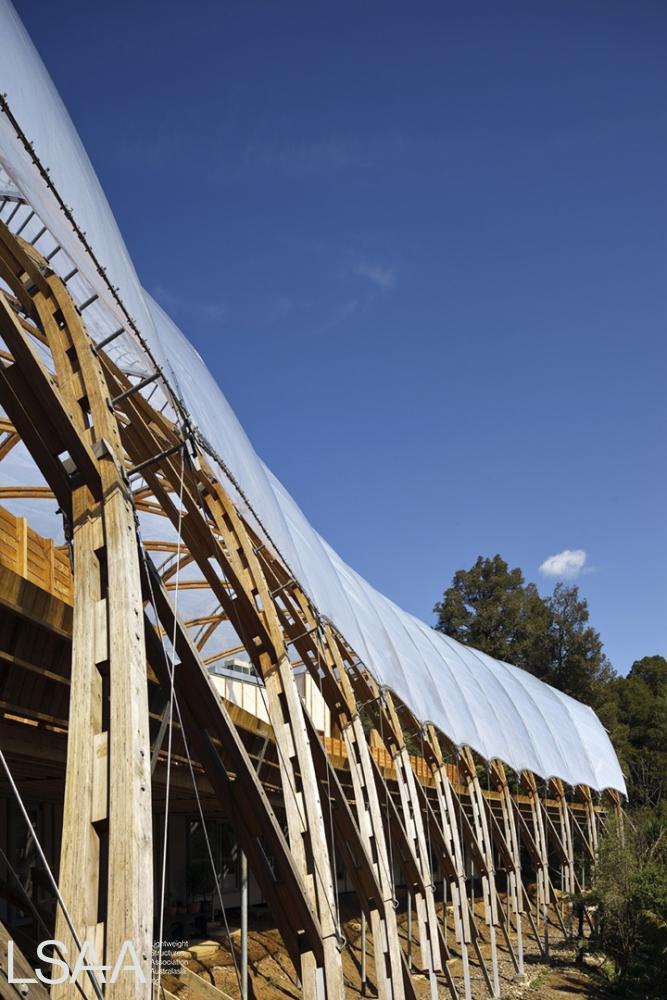 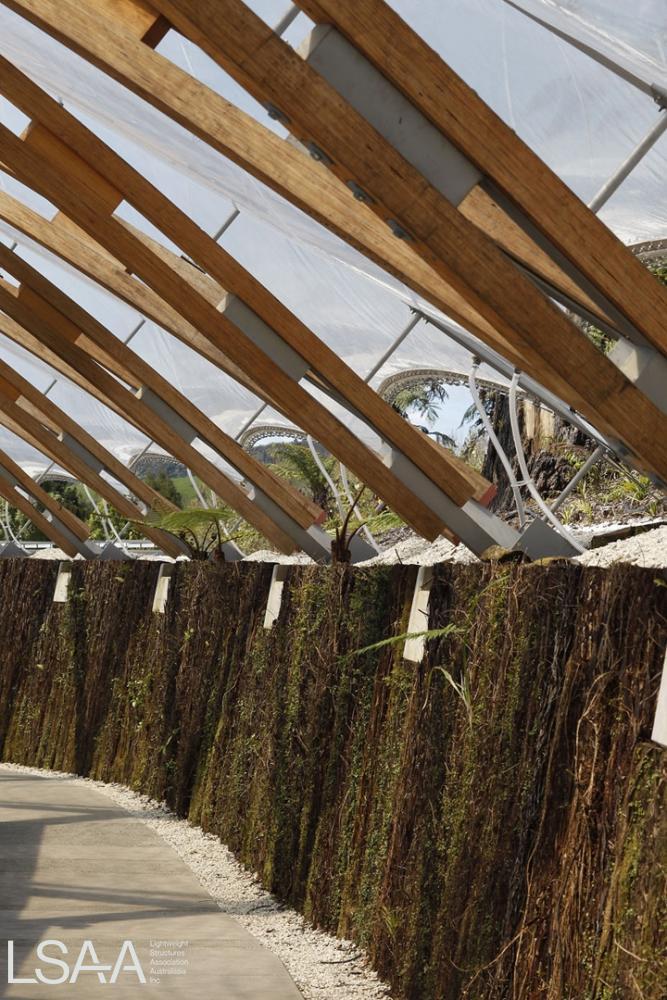 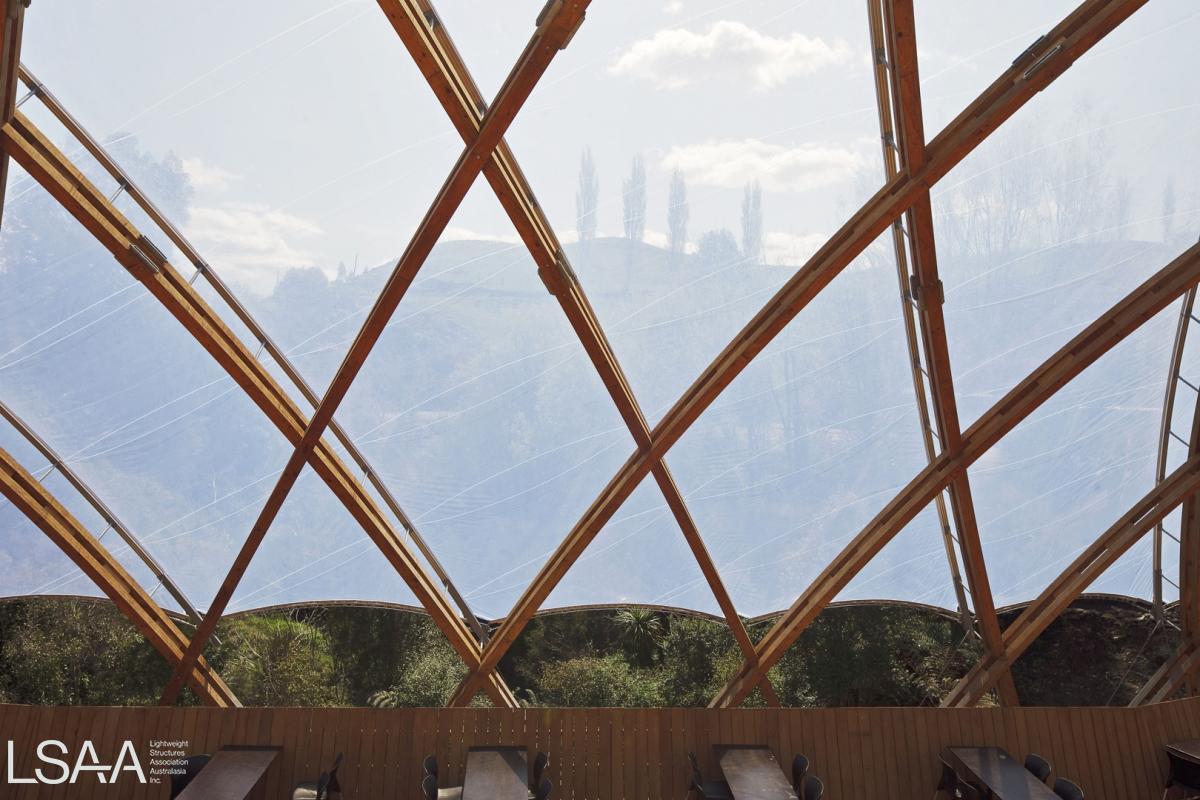 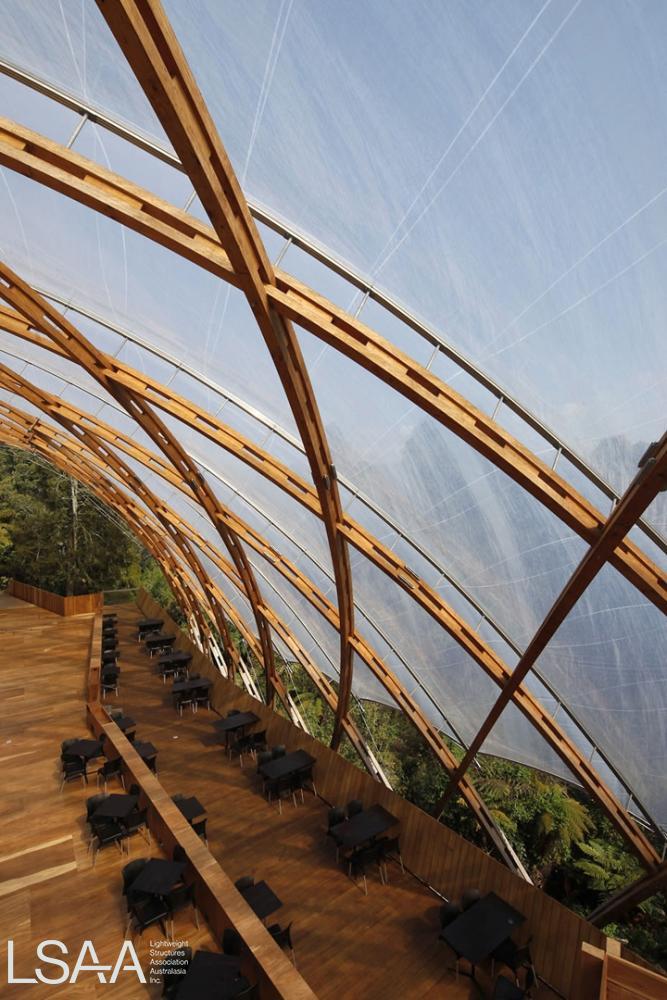 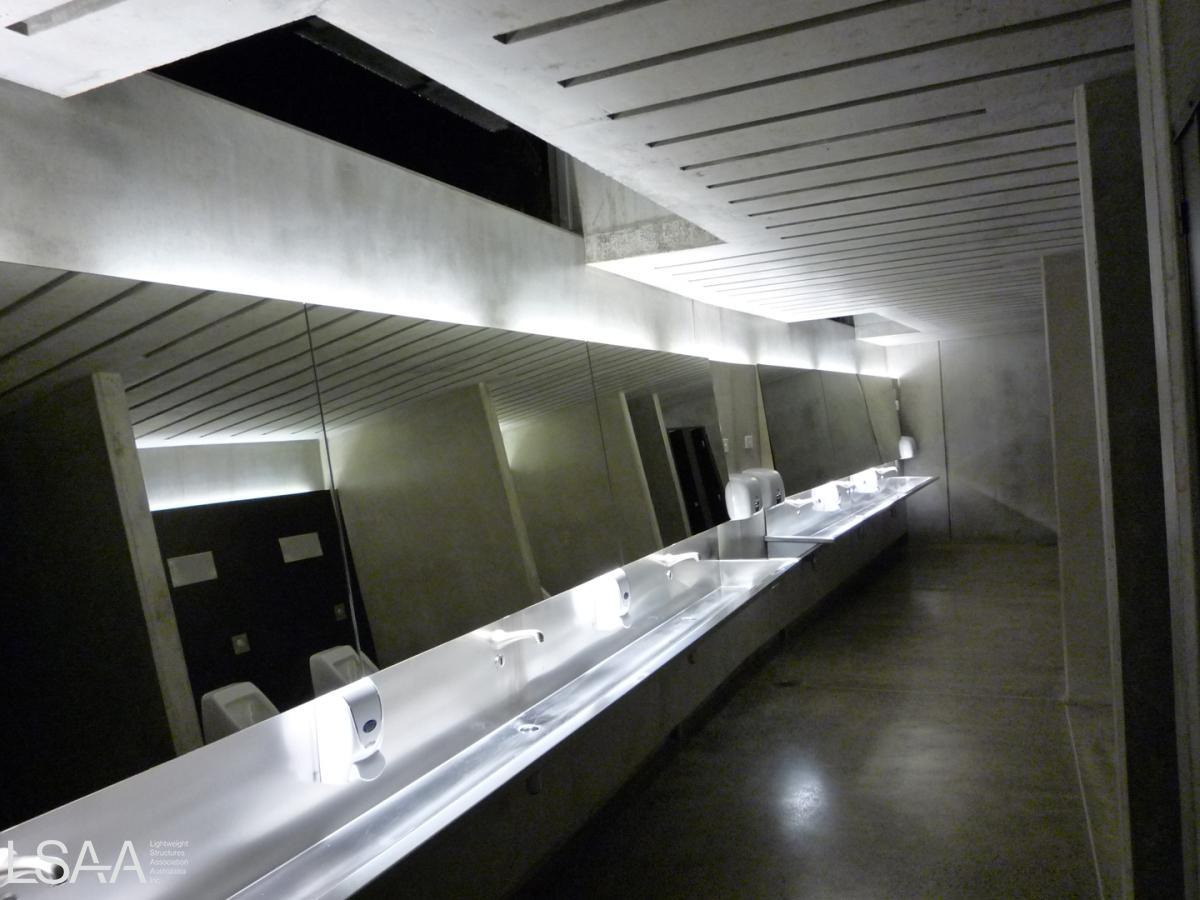 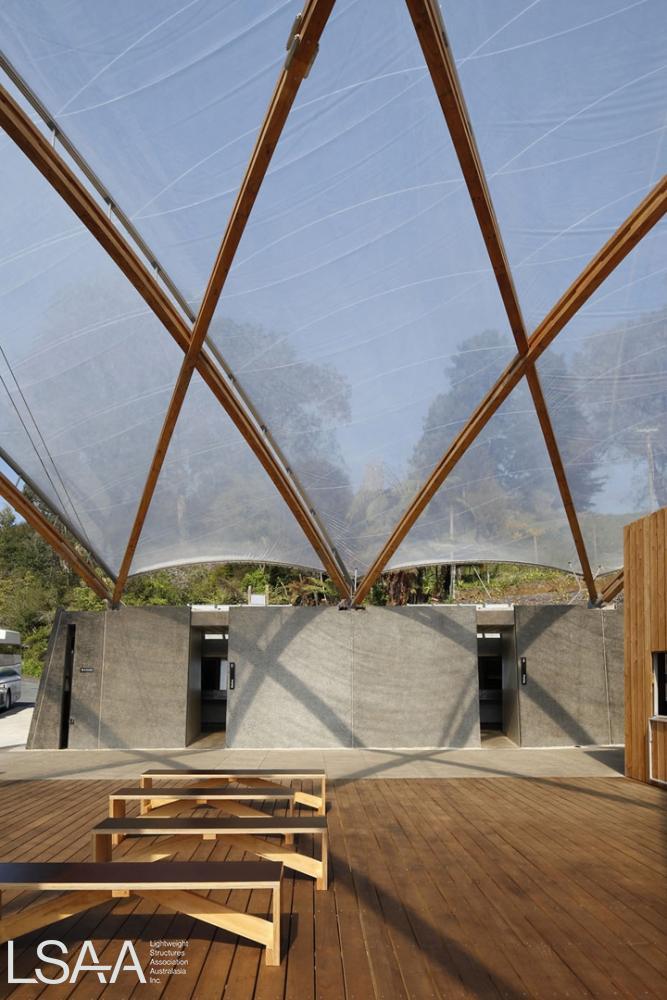 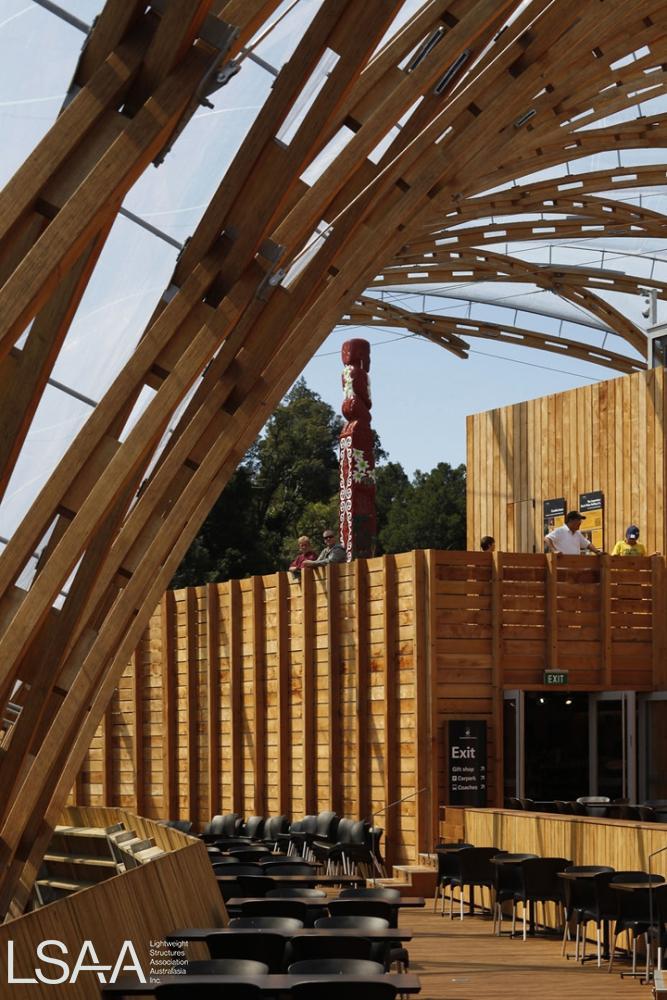 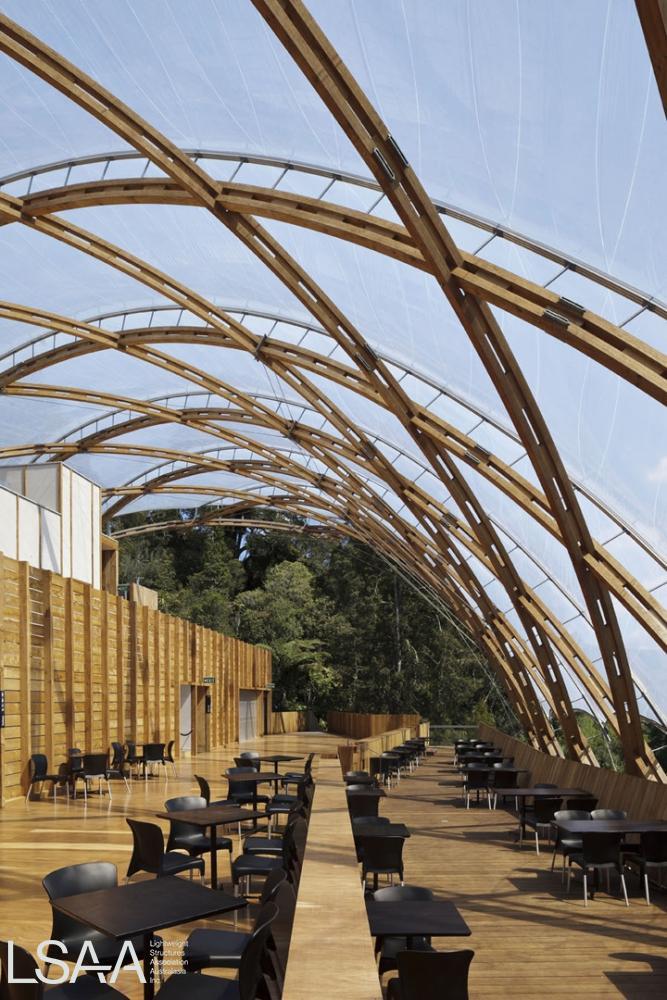 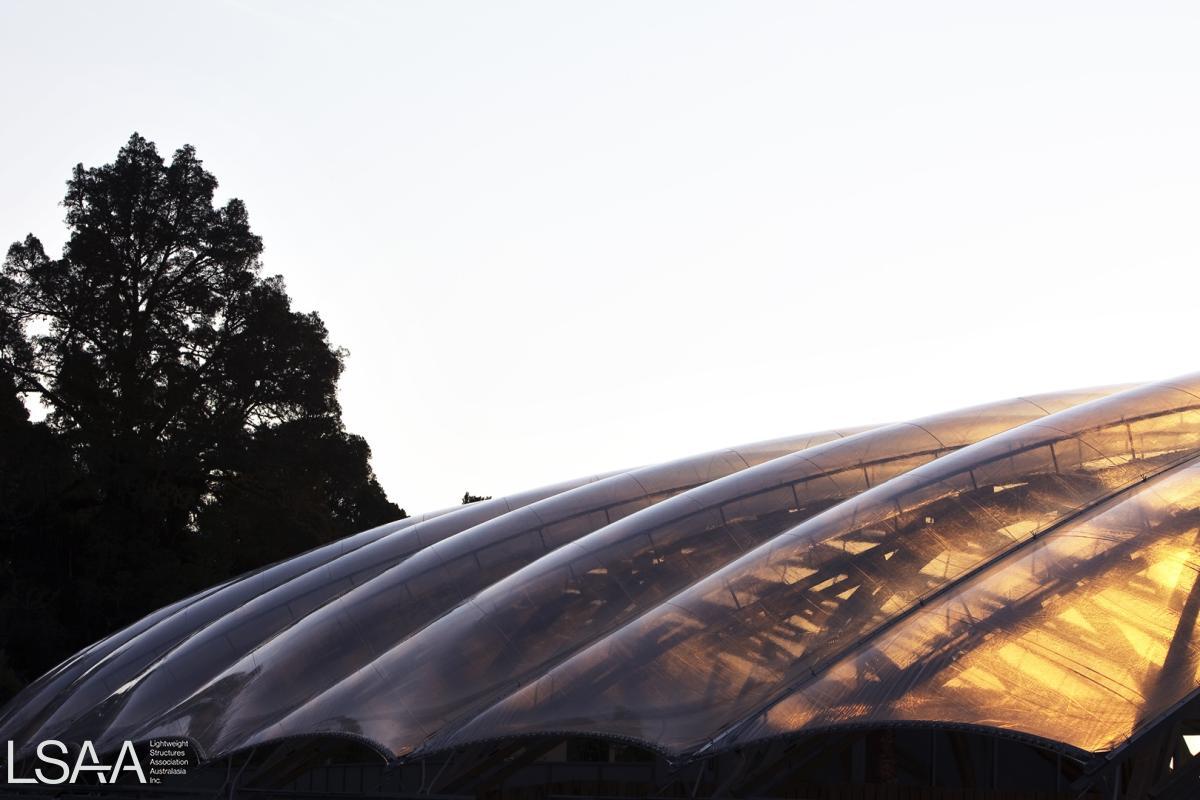 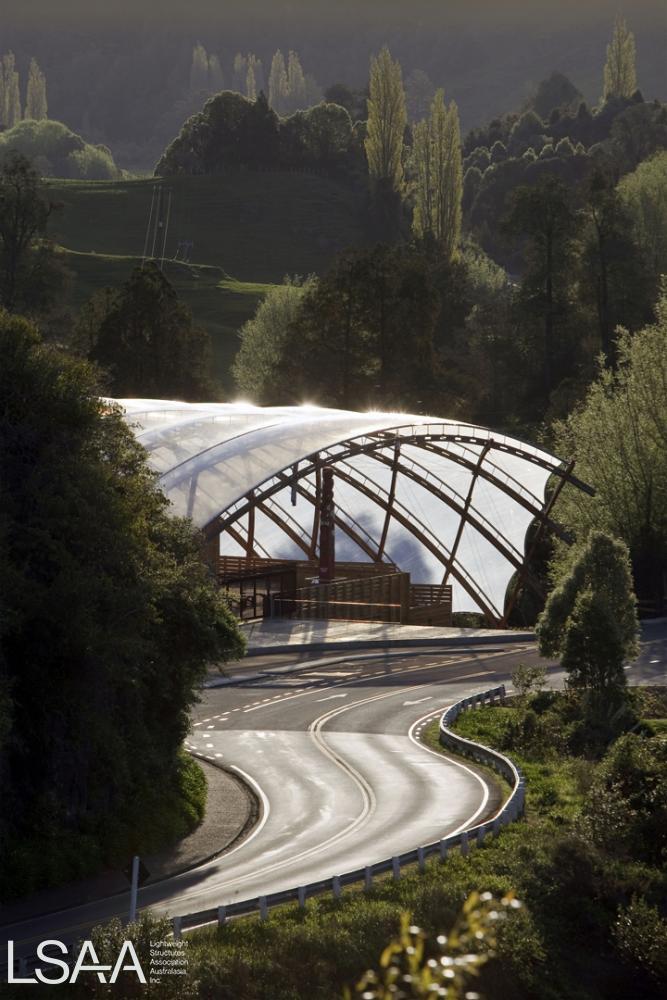 The historic caves were formed from the limestone transported by water over thousands of years, so we wanted to emphasis a connection with the Waitomo stream and the flows of water running through the caves. The canopy gridshell is aligned with the curve of the Waitomo stream. It reinforces the generating idea for this project of a simple lightweight ‘sky shell’ to counterpoint the subterranean cave space that is dissolved and moulded out of the ground. (Fig. 4). The canopy in combination with the caves, create a positive and a negative, if you like.

The structure of the centre is internationally significant. The geometry of the canopy was described by the surface of a toroid (Fig. 5) and Radiata pine LVL (laminated veneer lumber) was prefabricated into curved (and twisted) ribs in Hunter’s factory in Nelson. These timber I-beams were joined, overlapped in layers, then screwed together as they were assembled on site by Hawkins Construction. The weaving of the timber structure to create a timber net or ‘gridshell’ is recalled by the local hapu as a hinaki or Maori eel trap (Fig. 6). The gridshell was calculated by Alistair Cattanach at Dunning Thornton Consultants. His analysis was peer reviewed in London by Happold Structural Engineers, who commented favourably on the strengths achieved with NZ pine LVL and an innovative soft pad connection with the over cladding.

Inflated ETFE (Ethylene Tetrafluoroethylene) air pillows were tethered over the gridshell structure like a tent fly. The long translucent pillows are structurally efficient in spans of 4-5m and followed the lines of the LVL ribs. The gridshell was designed to span across the existing pathways and provide some shelter in the journey to and from the caves as well as maintain a strong connection to the established Kahikatea bush.

This project is a result of an intense collaboration between various teams of expertise.  We would like to acknowledge especially Alistair Cattanach from Dunning Thornton Consultants and his canopy structure team of Matthew Davies and Anthony Gardiner with Gareth Alley, Martin Williams on the base amenity building; Hunters for their collaboration and feedback in the timber LVL fabrication; Vector Foiltech in pushing the boundaries of  ETFE detailing; E3BW for their services design and Hawkins Construction Hamilton for their on-site construction expertise.

The cave entrance is accessed from the car park on the upper path while a lower path returns the visitors back alongside the stream exit (Fig. 2). Between these paths the amenities were accommodated within a simple base structure that extended the contours of the land (Fig. 3). The form of the base is distinguished and separate from the curved geometry of the overhead canopy.

The historic caves were formed from the limestone transported by water over thousands of years, so we wanted to emphasis a connection with the Waitomo stream and the flows of water running through the caves. The canopy gridshell is aligned with the curve of the Waitomo stream. It reinforces the generating idea for this project of a simple lightweight ‘sky shell’ to counterpoint the subterranean cave space that is dissolved and moulded out of the ground. (Fig. 4). The canopy in combination with the caves, create a positive and a negative, if you like.

A gridshell is a hybrid of two structural types. A structural grid that follows a two directional curving surface with sufficient grid elements that it acts structurally like a shell. The canopy gridshell is cut from the surface of a toroid, in this case a donut. (Fig. 5).  Whilst the ribs are generated from this toroid, the form is much more complex. The orientation of each rib is set to always face the centre of the revolution’s circle.  To do this the rib must curve and twist as it crosses the roof. A simple way to picture this might be to imagine laying a ribbon across the curve of a tyre tube (Fig. 7). As the rib takes this form, it not only wants to bend about its major axis and twist, but also to bend about a secondary axis. In order to fabricate ribs that were bent only about one axis (and twisted), we allowed the ribs to “relax” into a slight S-shape in plan (see Fig. 18 above). This removed the secondary bending. This process required extensive structural form-finding, which was done by a mathematical process, a structural modelling process and by back-checking in the 3D CAD geometry (by measuring the side of each rib, equal lengths confirmed there was no secondary bending).

The cladding comprises of ETFE pillows: cushions of high-strength plastic inflated to 200pa. These cushions could be patterned to the two-directional curvature of the gridshell. However, if they were to be broken into diamonds as in other similar previous projects, their cladding would be significantly more expensive - the majority of the cost coming from the aluminium extrusion seaming and clamping at the perimeter. Lifting the ETFE plane (dubbed the “e-plane”) above the timber gridshell (or “t-plane”) allowed the use of long strips of cushions, the belly of which cleared the timber structure (Fig. 8).

Rib centres were selected to optimise spans for commercially available thicknesses of ETFE foil at an average of 4.25m.  In plan the line of the cushion edges follow over the ribs in their own similar S-curve: the edge extrusions also being bent only about one axis and twisted.

The timber ribs act as large arches spanning the 28m across the structure. These arches are made from two layers of LVL ribs interconnected with intermittent blocks fabricated from glue laminated timber. By clamping the blocks between the two layers, Vierendeel action allows localised loads to be shared out to the greater shell structure (Fig. 9).

The arches are arrayed around a circle of revolution and when wind actions try to rack the structure, the diagonal nature of the grid causes it to lock up as it rolls forward, i.e. the arches at the end are skewed to the arches in the centre, and hence under racking loads the ends act as diagonal braces.

As the wind lifts the structure, the ribs want to “scissor”, allowing the two ends of the shell to move towards each other. Similarly, as the structure eases down when the wind drops, or under gravity loads, the tips relax downwards and outwards. To control these tendencies, a net of cables were included in the t-plane: cables crossing the diamonds inhibit this scissoring action. The dominant uplift loads are evident in the greater number of transverse cables, as shown in Fig 10.

The ETFE cushions resist forces by pulling inwards on their perimeter members. With the cushions connected in a series, these forces balance internally but  transfer high (3-8kN/m) pull-in forces  to the perimeter of the cladding. These are resisted by a complex series of edge catenaries and tethers as shown in the Fig 11,12,13.

The structure needs to allow for any one cushion to become deflated suddenly and be repaired/replaced. With the e-plane over 0.5m above the t-plane, the resulting twisting forces on the intermediate structural members would usually be immense. To counter this, DTC conceived a world-first system where the cushions are held on a series of flexible poles above the timber structure. The e-plane is therefore free to move above the t-plane as unsymmetrical loads are placed upon the cushions. The “floppy poles” were achieved simply by utilising a 20mm pad of neoprene at the fixing point. Structurally, this allowed us to limit forces to acting only along the major axis of the principal members Fig. 14.

The timber ribs were fabricated in two layers, so they could be interwoven to create layers 1-4 as shown in Fig. 15. Each layer is made from three layers of ex170 x 36mm Laminated Veneer Lumber. Each LVL was pre-planed by 1.5mm to remove the wood compressed during manufacture and allow a full-strength glue joint. The three layers were laminated together by the firm Hunters in special jigs to form the curve and twist (Fig. 16). The jig layout, shop-drawn by DTC (Fig. 17), allowed for an over-bend and over-twist such that the ribs would spring back to their ideal shape after the glue had set. Initial layout in the jigs showed the ribs curving up and away from the bed. Measurements of this were taken, and twist tests were made on the prototype to ensure the correct torsional modulus (G) was being used. Changing this required re-casting the whole gridshell geometry to remove the resulting secondary bending stress. Modification of the jigs to this revised shape indicated a perfect fit of the timber to the bend and twist required.  Fabrication of the ribs was carried out in Winter 2009: the cold temperatures allowing 4-8 matching ribs to be glued in the same jig, because the slower glue-setting time in the cold weather allowed extra time for manipulation.

All blocks, bolt-holes and other hardware were fitted to the ribs before H3.1 treatment and the first of four coats of Drysden’s wood oil. The two splice joints along the 28-34m ribs were formed using high-tensile epoxy rods shop-fitted to steel “sandwich plates”, allowing a simple site joint as Fig. 18.

THE ERECTION of the gridshell was conducted on a birdcage scaffold. The contact points on the scaffold were difficult to define and were eventually defined as horizontal circular contours.  The ribs, each weighing approximately 150kg, were layered over the scaffold structure with a small long-reach road crane.

The steel “bunny ears” at each end were positioned accurately to start and end the rib alignments (Fig. 19). After significant cross-checking the adjustment to the alignment of each rib, all ribs were positioned well within tolerance of 40mm in the length (over 28-34m).

Once heights were re-checked, end fixings and the fitting of node joints and cables could begin. The end fixings were generally site-drilled 14-gauge self-drilling screws through the steel bunny ears to achieve the 40mm tolerance in length. Once all hardware was in place, the scaffolding was removed and the deflections of the tips monitored. A tip deflection of 376mm was recorded against a predicted 377mm, although there was a subsequent settlement of another 10-15mm after the structure was oscillated to check the dynamic tip frequency.

The ETFE cushions were then erected in their extrusions and subsequently inflated. The pull-in force at the perimeter from this inflation causes the tips of the gridshell to rise approximately 350mm, countering the dead load deflection.

In summary the structure is unique. Although the complex geometry pushed the limits of our three-dimensional modelling tools the resulting exceptionally light structure ultilises timber members only 316mm deep at 4.25m centres to span almost 30m.