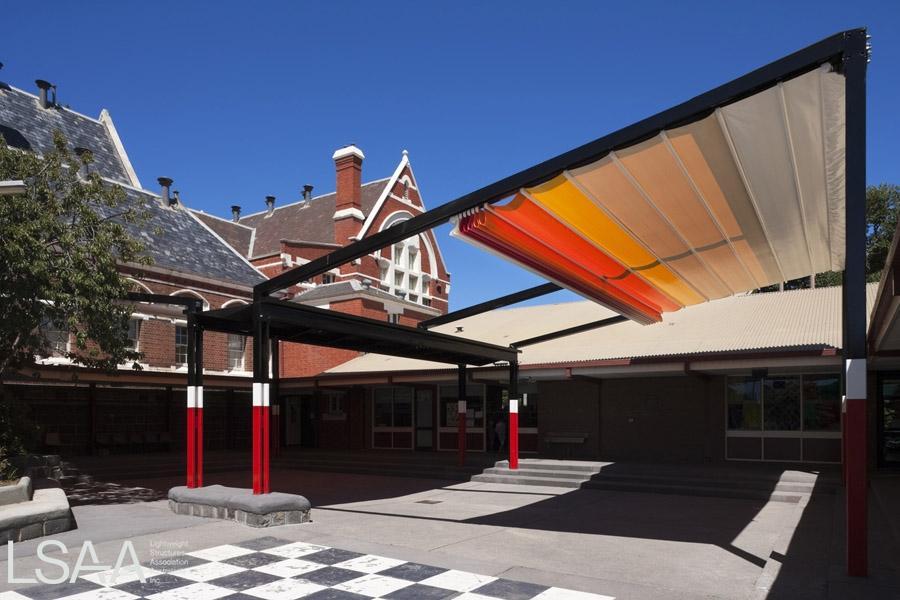 To provide a retractable shade structure to an existing exposed school quadrangle courtyard in St Kilda, Victoria, that offered flexibility to a highly utilized space. Without detracting from the existing heritage school built in 1873 and working with a 1970’s addition, the project needed to remain respectful of the surrounds whilst providing a vibrant new design proposition and considered functionality. The brief was to provide shade and weather protection to a large external quadrangle, central to major school operations, assemblies, concerts, play area and general shelter. 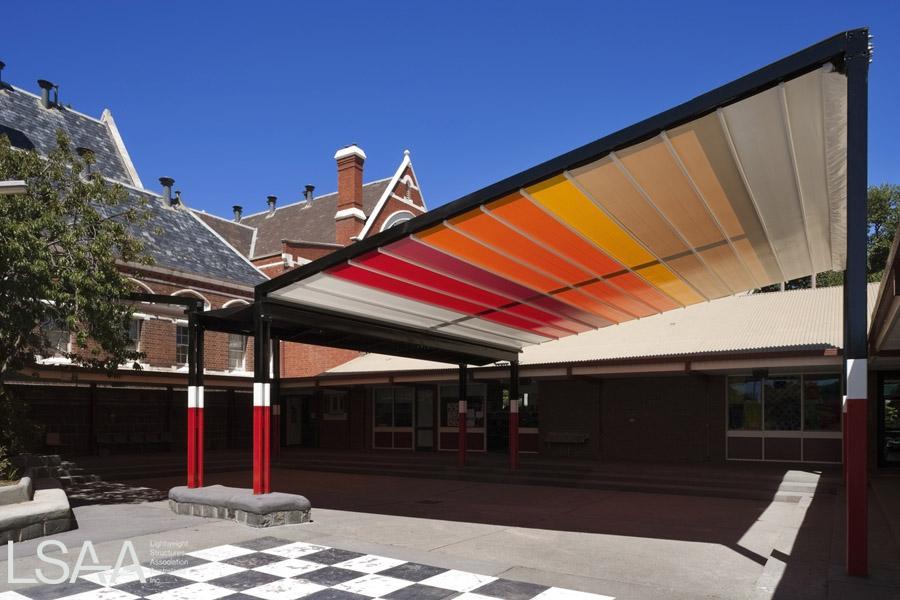 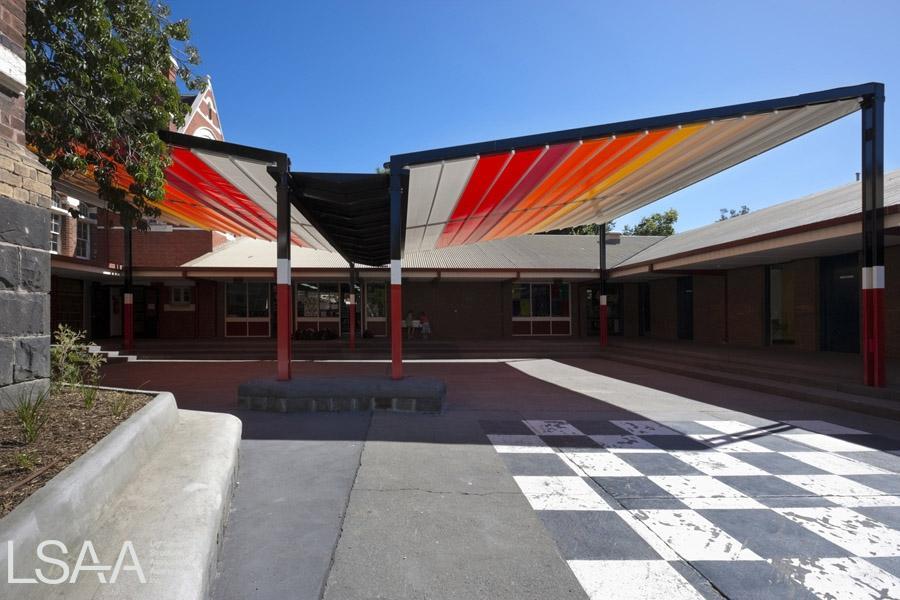 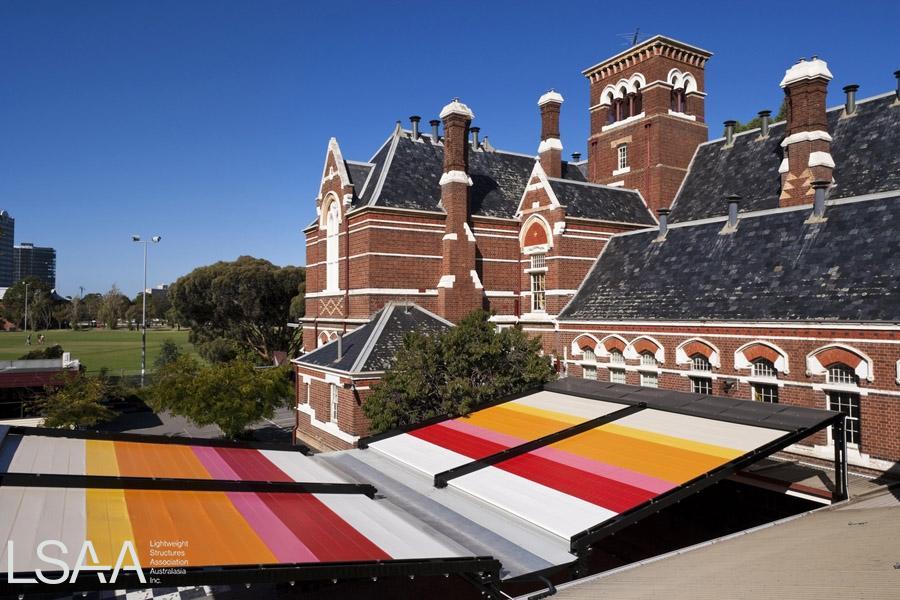 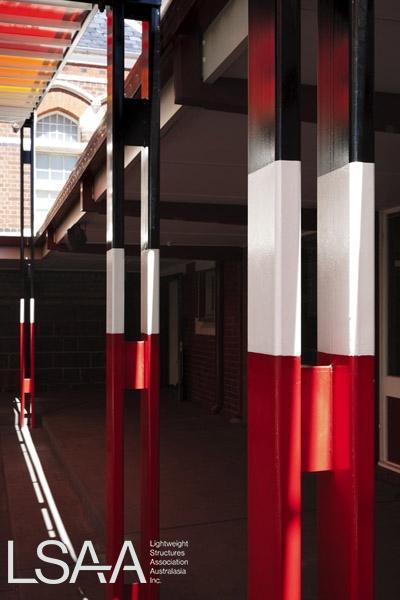 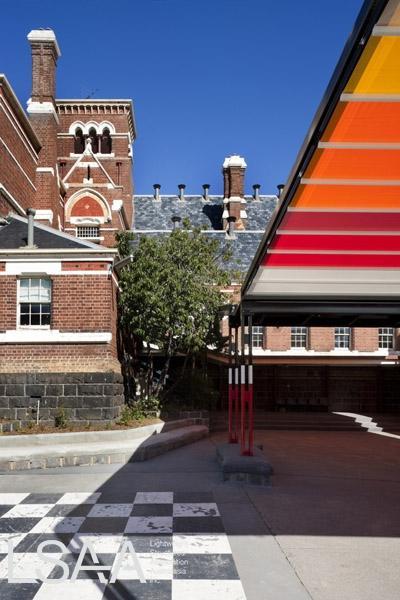 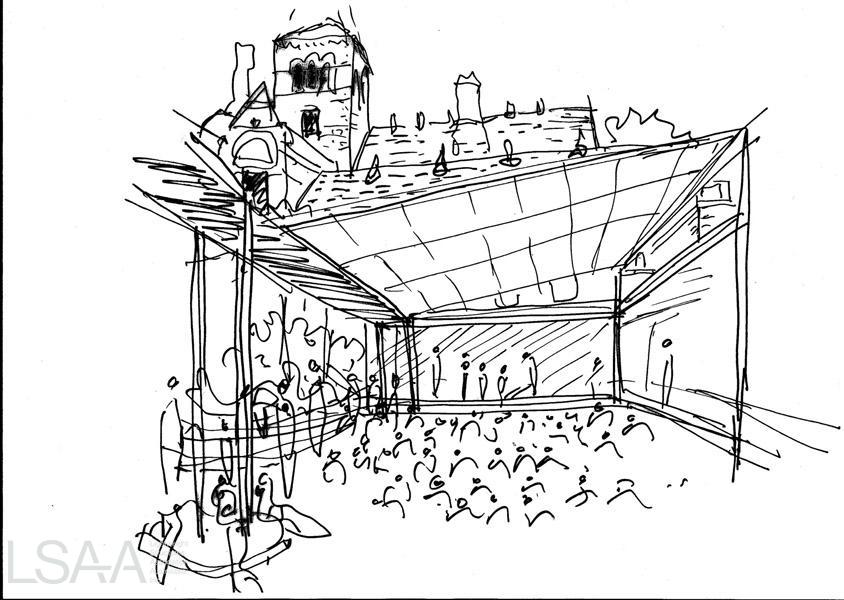 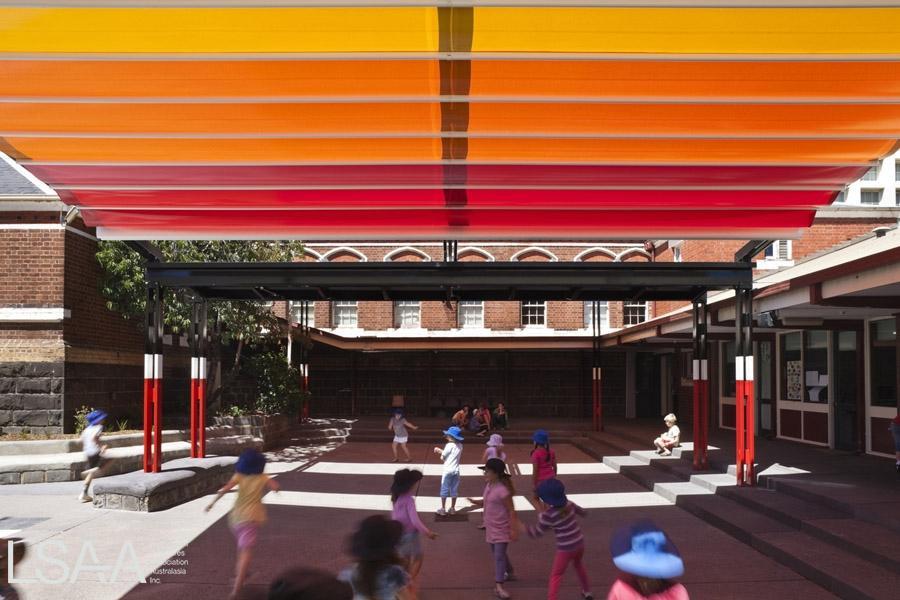 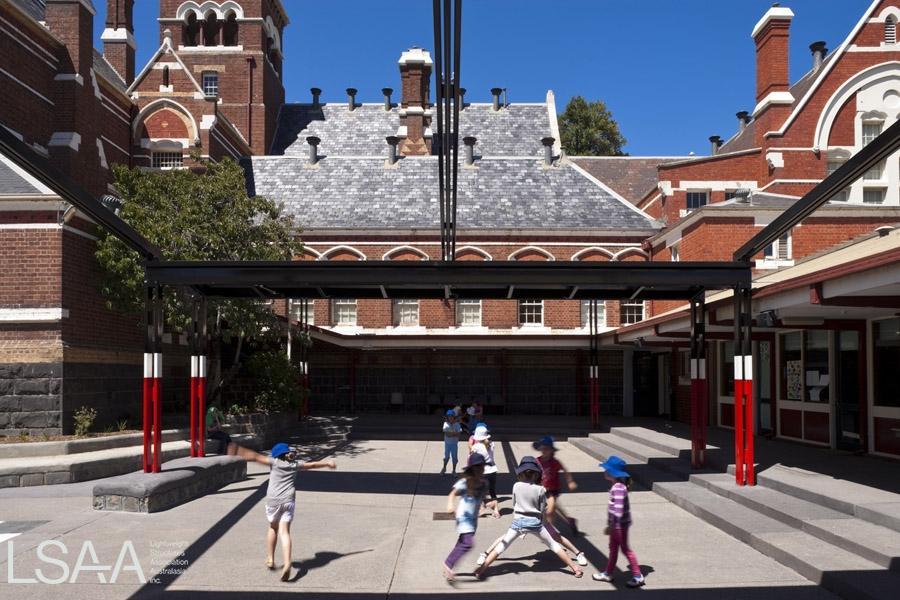 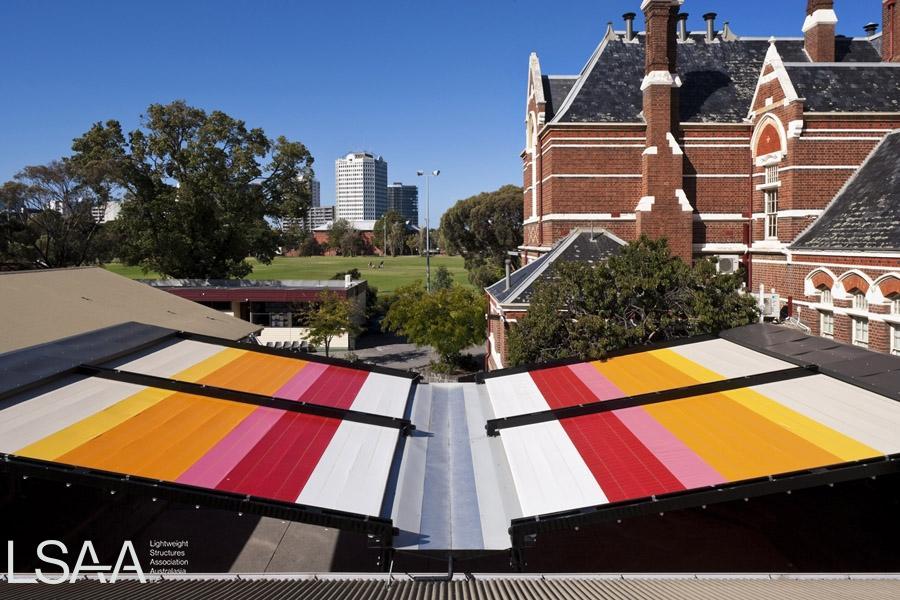 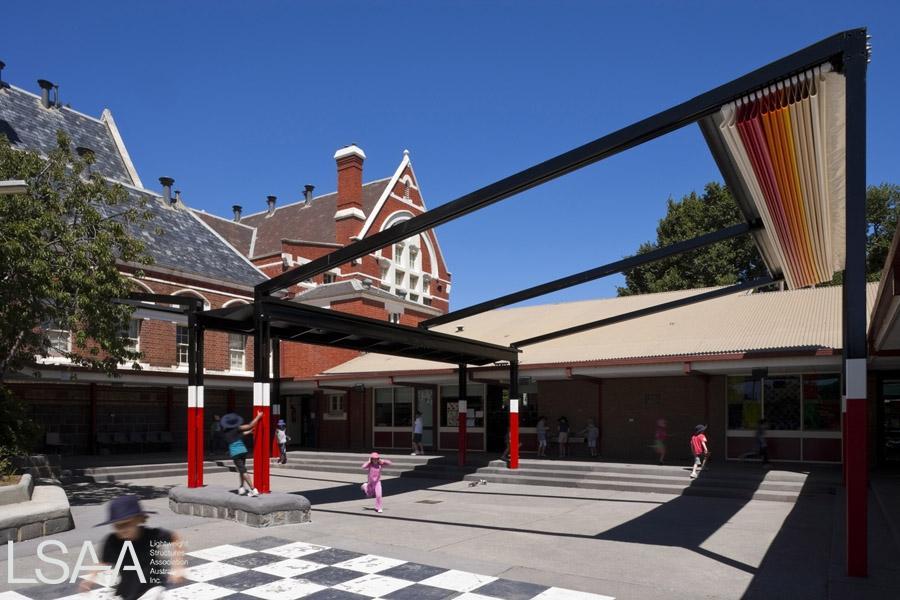 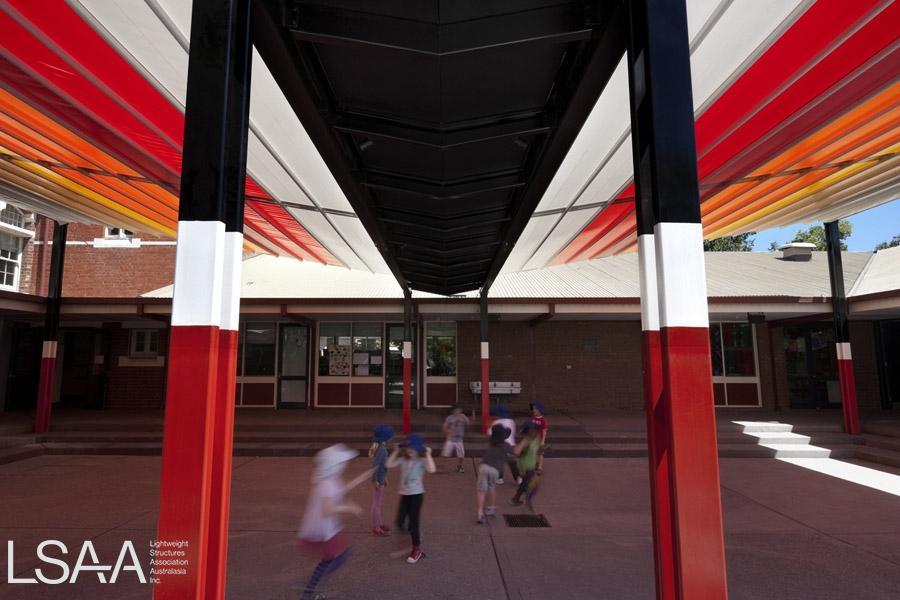 Carefully inserted into the existing courtyard, the new structure engages with the existing conditions on a number of levels. Spatially the area is now framed and defined yet remains light and open. The sense of space is not compromised yet is enhanced by a flexible shelter that can retract back to a simple steel butterfly shaped frame almost as if it has gently landed in the quadrangle.

The existing chromatic range of brick colours of the old school and safety concerns led to the utilization of known St. Kilda colours of red, white and black for the steel frame. To further enliven the project, the retracted fabric utilizes colours reminiscent of beach towels, deck chairs, colour swatches and op-art.

The retractable roof structure provides a much needed amenity to the main assembly area quadrangle. Students, staff, parents and the general public are all beneficiaries of the new system providing weather protection, better seating, landscaping and site lines as well as becoming a central focus for the school.

We attempted to design the project with the children’s point of view in mind. The steelwork is painted in the St. Kilda football team colours, to give the children a sense of their locality but also as a safety measure: the white strip is at eye level and discourages accidents. When the roof is retracted the colour palette of a rainbow pattern (warm tones) is revealed amongst other metaphors.

Essentially, the structure is an efficient, light weight, cost effective solution that melds the many design parameters involved into a considered aesthetic proposal that unifies but not dominates the central core outdoor space of the primary school. It is a system that can be extended if required and works to the full extent of simple retractable shade systems currently available.

The lightweight steel frame with its retractable roof has allowed the installation to have a strong visual and operational effect when enclosed yet when retracted, almost disappears, allowing the heritage building to be still fully appreciated.

The brief was two fold: one to enable assemblies and concerts to take place regardless of rain and two, to provide a large external area that is shaded from the sun on hot days. The outdoor space that was to be roofed, is between the 19th century historic school building and the 1970’s additions. The new roof had to compliment the 19th century buildings and add some life to the plainer brown brick more recent additions. We also did not want to cover or conceal these building rather provide an open legible and light framework to enhance the overall architectural paradigm.

The school council initially were considering covering the area with a permanent structure that would have ruined the space. We presented our design ideas and methodology that emphasized a retractable roof operated by remote control so as to allow maximum flexibility of the space, allowing the area to remain open to the sky, partially open or completely closed if required. The column spacing of the support structure was critical to work within the functions of the various building operations, level changes, service locations and water drainage. This was also achieved to maximize the span available for a retractable shade of 8.0m. The butterfly form enabled air and light to still enter the area even when the roof is fully enclosed. Landscape modifications and formed concrete seating (to be mosaic tiled by the students) where added to the periphery of the structure to enhance site lines and complete the ensemble.

The structural system is a simple post and beam steel structure to house the retractable coloured PVC roof driven by  small concealed motors. The placement of the columns, relative to the span of the roof system and the existing steps of the quadrangle, fitted well into the existing space as a double wing or butterfly shape. The collection of rainwater is emphasized by the central v shaped gutter which deposits water back to the existing building roof.  Steel rib supports were simply expressed in the custom formed , black painted gutter. The pitch of the roof also met with design requirements of drainage, self cleaning and operation.

Steel frame structure for lightweight , strength and ease of erection.

The steel frame itself became a design object whereby all the single column locations were doubled up to form narrow twin columns with small bracing plates. This avoided the traditional heavier in appearance I beam or square column, allowing the play of light through columns and roof over to float. Approximately 1.0m cubic concrete footings were poured below the blacktop surface and the columns secured by plates and bolts according to design wind loads and engineering requirements.

The entire steel frame was bolted together in place after careful sizing, cutting and assembly for ease of installation and no on site welding. It was also factory painted in red and black before delivery and the white strips added post assembly. The multi coloured retractable shade system was then installed with its ribs and runners neatly fitting into the steel frame for a smooth operation.

The project involved many aspects of a design and construct project in a sensitive heritage and public location. It required approval of the School Council and funding by the BER scheme of government stimulus package and had to meet strict budget requirements. It gained local Council approval and met BCA requirements and importantly the St.Kilda colours had to be (reluctantly) approved by the Collingwood supporting school principal! The construction and methodology was a team effort of the steel fabricators, shade structure installers, landscape consultants, structural engineers and overall design and project management by the architects.