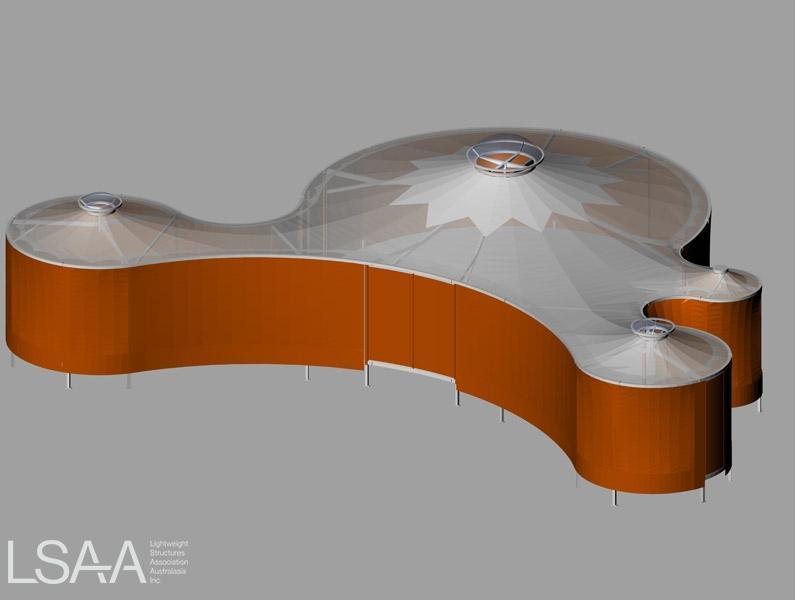 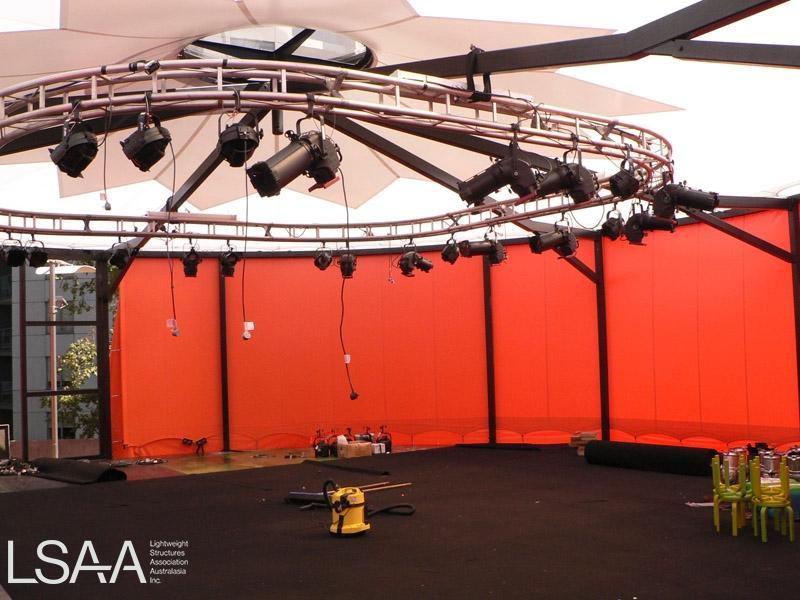 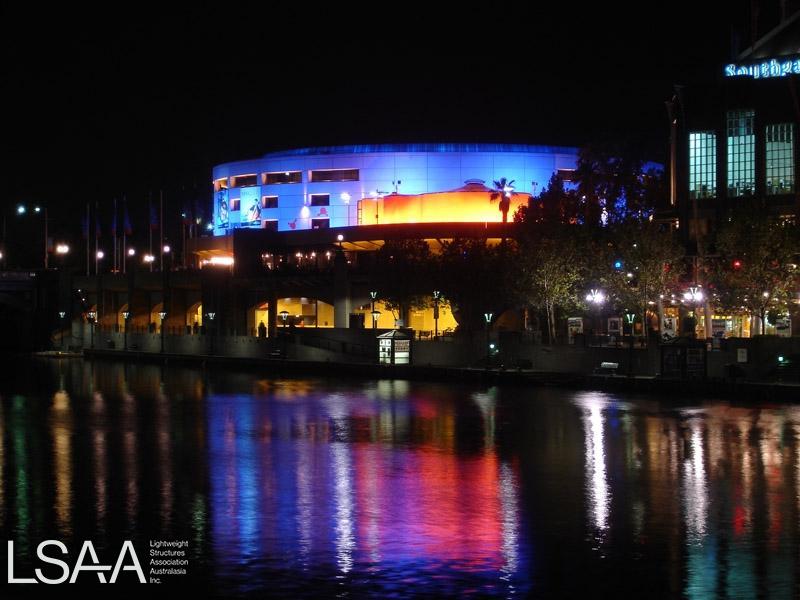 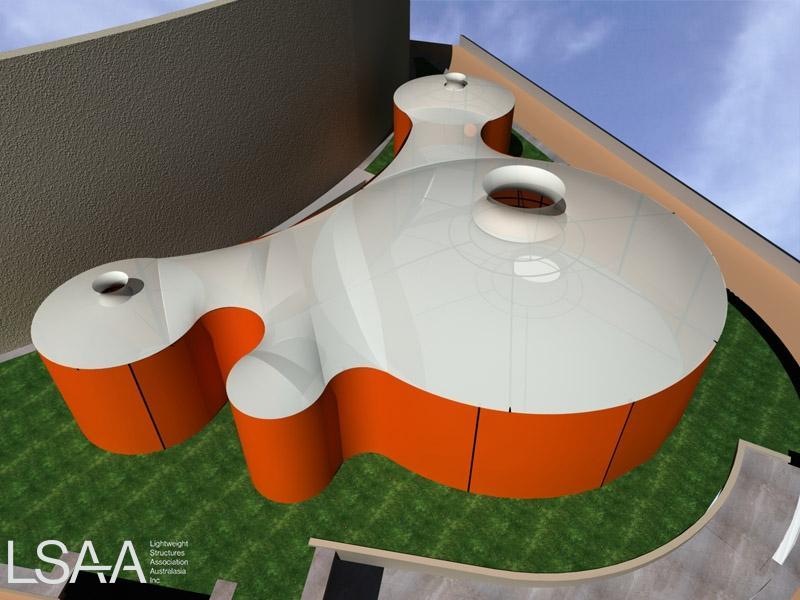 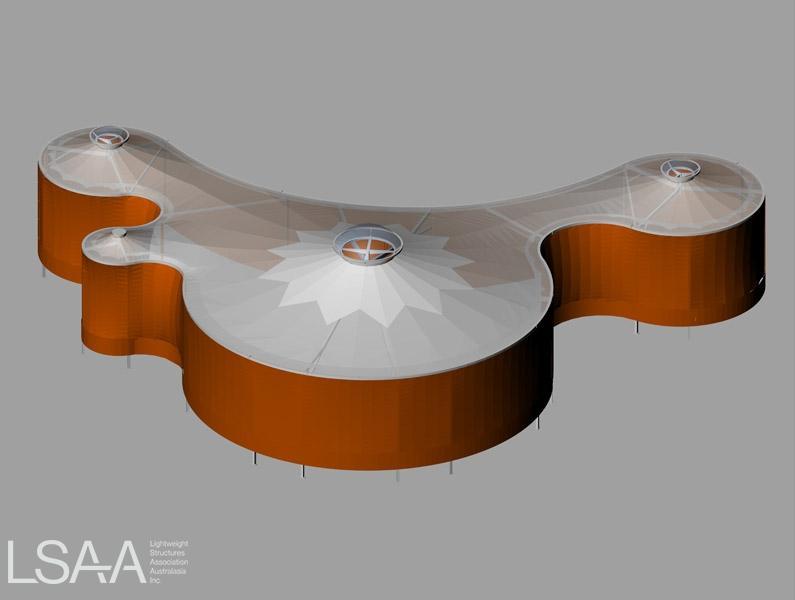 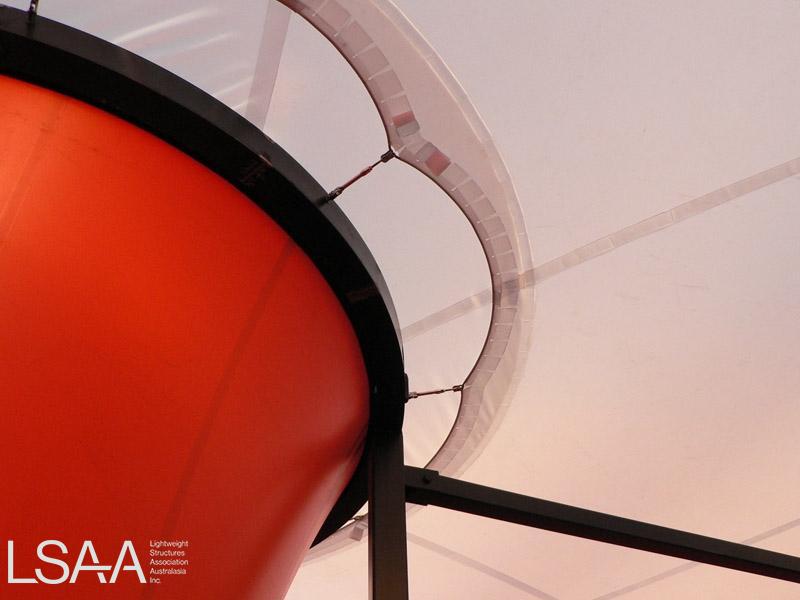 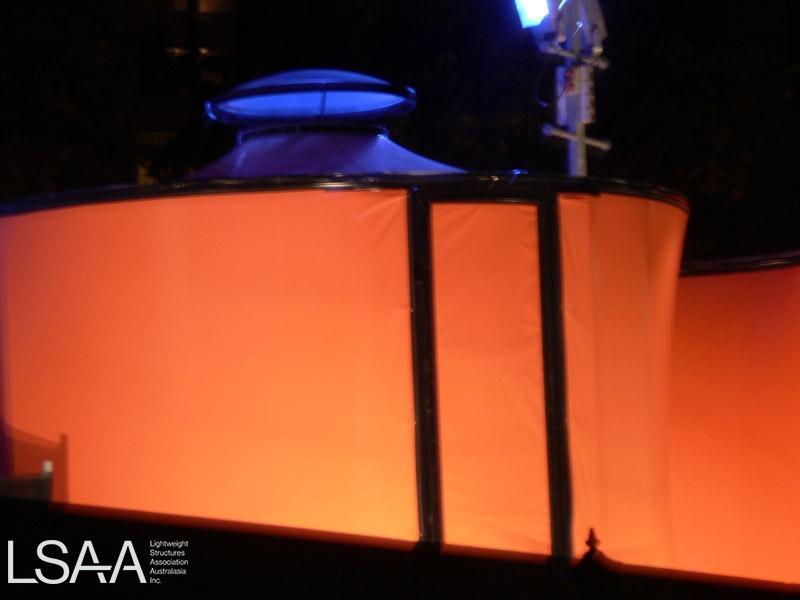 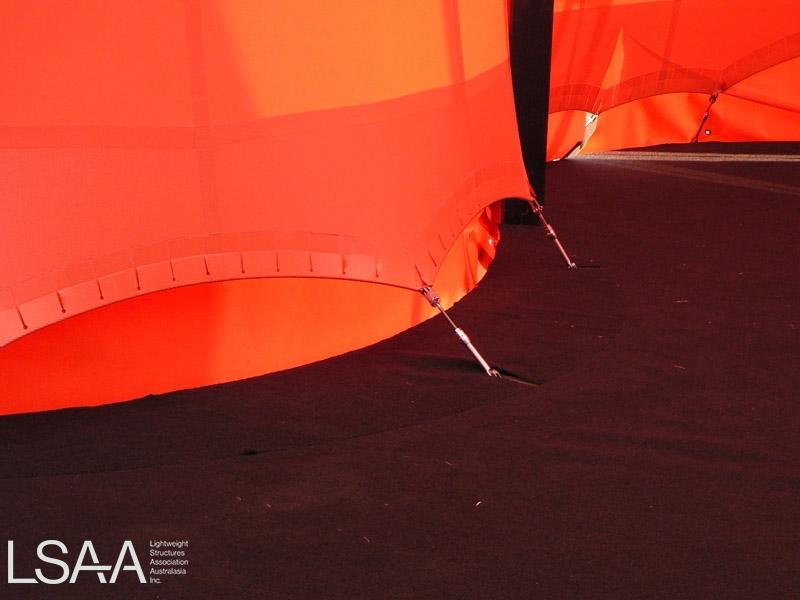 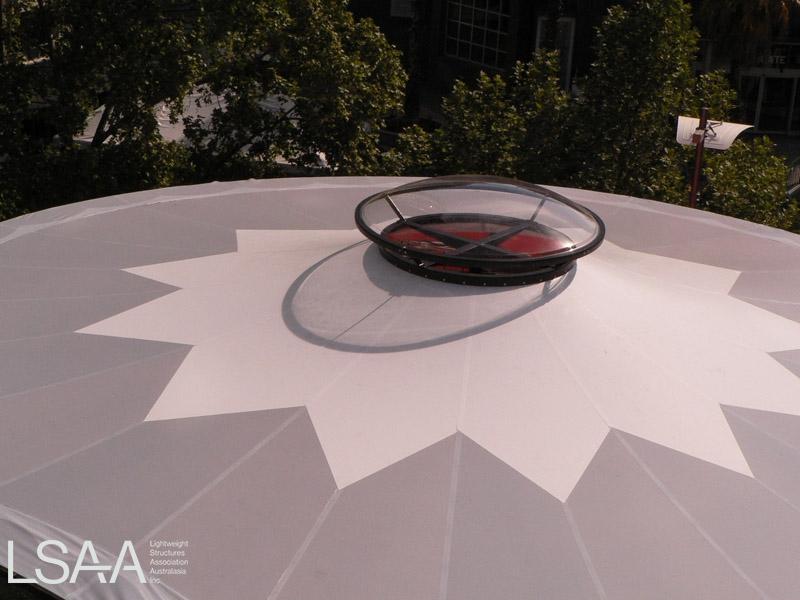 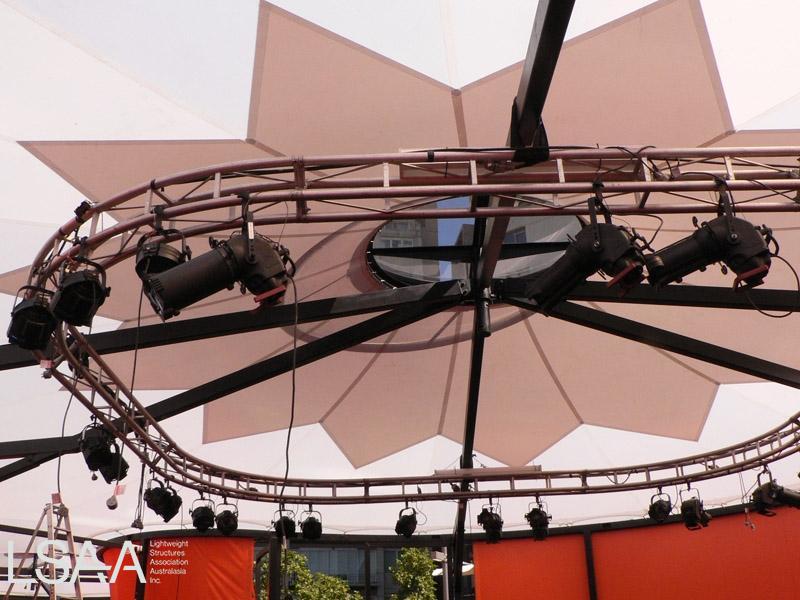 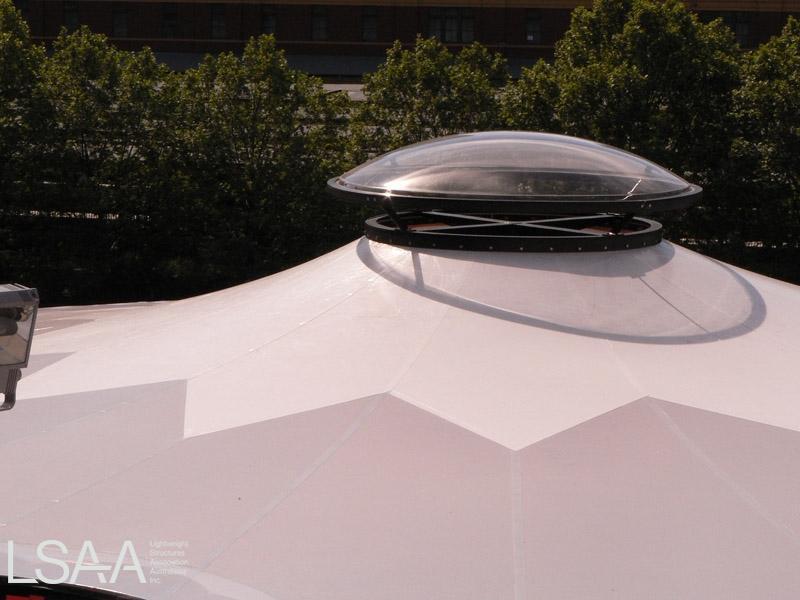 Designed by Melbourne-based architects Wood Marsh and engineered and project managed by Tensys, The Clubhouse will be temporarily located on the Upper Terrace of Hamer Hall at the Arts Centre throughout the Festival from Thursday 12 October.

This exciting new venue takes on the function of a cubby house and creates a public space that is fun, visible and engaging and was designed with young people in mind. Expanding on the activities of Festival Kids Club @ ArtPlay in 2005, The Clubhouse will be home to workshops and special activities that give young people and their families the opportunity to interact with Festival artists and to experience architecture in a whole new light.

The bright orange fabric of the walls and the dynamic form of the structure give it the appearance of a giant orange amoeba. At night the translucent fabric will be lit from within to emit a colourful glow acting as a beacon that will be seen from Federation Square and the banks of the Yarra for the duration of the Festival.

Wood Marsh’s buildings and urban sculpture of the 1990s are synonymous with Melbourne’s urban landscape. Upon her arrival in Melbourne, Kristy Edmunds was fascinated by the public’s relationship to its buildings and with how Melburnians tend to connect their built environment to a political era rather than to an architectural aesthetic or cultural era. Through this creative collaboration with Wood Marsh, Edmunds hopes to bring a dialogue around architecture and the urban landscape to the Festival, especially with some of Melbourne’s youngest inhabitants.

Tensys are structural engineering consultants who specialise in the design and construction of lightweight stressed membrane structures. They have offices in England and Australia and have worked on diverse projects from the roofs for the Berlin and Frankfurt stadiums for the World Cup 2006, to a huge sculpture by Anish Kapoor installed in the Tate Modern in London. They are currently engineering the main pavilion at the Royal Melbourne Showgrounds.

Dan Zanes is a featured artist at The Clubhouse. Former singer-songwriter for legendary 1980s rock’n’roll band The Del Fuegos, Zanes is making seriously good and seriously good fun music that young families can enjoy together.

Architects Wood Marsh has developed the Clubhouse as a bold sculptural performance venue for the Melbourne International Arts Festival.

The Clubhouse is designed as a relocatable structure whose form has drawn inspiration from its inaugural setting, the upper terrace of the Arts Precinct Concert Hall overlooking the Yarra River on the South Bank.

The playful form is fabricated with Bright Orange fabric walls and with a highly translucent fabric roof designed to appeal to a younger audience.

The colour captures the eye during the day and the structure glows bright at night drawing inescapable attention to the Clubhouse in this busy city precinct.

The organic form integrates one large performance space and three smaller ancillary spaces maintaining the integrity of the sculptural form and creating an exciting and versatile venue.

Tensys Engineers were retained to bring this concept to life.

1. The complex geometry of the form was a challenge

2. The structural had to be relocatable and so designed with the flexibility to suit as yet unspecified sites

3. The specified site had restricted access and was a sloping site formed from fill on a suspended slab of limited capacity. The slab was finished with a waterproof membrane that could not be touched.

4. The structure had to be capable of quick assembly and disassembly

5. The budget was limited.

The constraints lead Tensys to propose that the structural framework be divided into potentially manhandleable components. These were sized to suit transport requirements.

The complex curved perimeter frame was broken up into a series of hurdles with perimeter floor and roof beams joined with pairs of column legs. The major column legs had internal sleeved adjustable feet and the minor columns were designed to sit on scaffold screw jacks.

The hurdles were joined with individual floor and eave beams that linked pairs of hurdles together.

The major column legs were detailed to sit on steel plates that could be buried into the earth and weighed down with lead weight kentledge.

The venue floor was supported on light gauge purlins that spanned across the space joining the perimeter floor beams and helping to tie the structure together at floor level. Purlins were also supported on scaffold screw jacks at intermediate points as required. The floor was fabricated from structural plywood panels.

At eave level there were inclined radial framing members connecting the major columns together at central hubs which also provided a strong point for jackable central head rings. The roof was broken up into four regions reflecting the floor plan with a major head ring for the central performance space and three minor head rings for each of the ancillary spaces. The height of the head rings above the eaves was minimised to satisfy the architect’s intent that the roof of the structure was to be as low rise as feasible.

The walls of the structure were fabricated from translucent tensioned PVC coated PES fabric. The fabric was supported in an awning rope track at eave level and tensioned down floor level with a multitude of adjustable rigging screws pulling on a catenary cable and anchored to the perimeter floor beam.

There was also a fabric skirt as floor level that provided infill from the tensioned wall panel to ground level hiding the subfloor space that varied in height do to the fall across the site.

The roof was fabricated from highly translucent clear PVC coated PES mesh fabric. The roof was fabricated as a single panel to be clamped to the four head rings and tensioned out at the perimeter with another multitude of adjustable rigging screws pulling on a continuous catenary cable sleeved into a pocket in the fabric. The riggings screws attach to cleats on the perimeter eave beam.

At the base of the walls there is a shaped skirt flap to infill from the tensioned panel to ground level.

All rigging elements are Grade 316 stainless steel supplied at a heavily subsidized rate by Ronstan.

The structural frame is fabricated from pre-galvanized hollow steel sections and the floor joists are cold formed purlins with structural ply flooring.

In these days of specialist contractors, due to limited funding and limited time available to tender works, the Melbourne International Arts Festival opted to mange the fabrication and construction works with the assistance of Tensys Engineers who donated their services for this part of the works.

Works were broken up into packages for steel fabrication (including steel detailing), fabric supply, fabric fabrication, rigging supply and installation.

Element Rigging was appointed to assemble and erect the structures at an early stage to help with the planning and management of the works. Tensys Engineers provided extra advice on the specialist aspects of fabric installation and Element Rigging included some specialist installers with much experience along with their regular team.

Steelwork was fabricated by Thornton Engineering.

Miscellaneous materials were purchased by the Festival Management.

All materials were lifted onto the site from street level with a mobile crane.

On site Element Rigging used a very small mobile crane to help support each hurdle as it was lifted into place.

As it was discovered on site, the steelwork was not checked prior to shipping and despite accurate 3D modelling by the shop detailer, the fabricator failed to follow the plans and there was much cut and shut required on site to correct steel sufficiently so that fabric would fit. This was a major disappointment as it stretched out the installation time right to the last few minutes.

The fabric panels were installed without hitch once the steelwork was corrected.