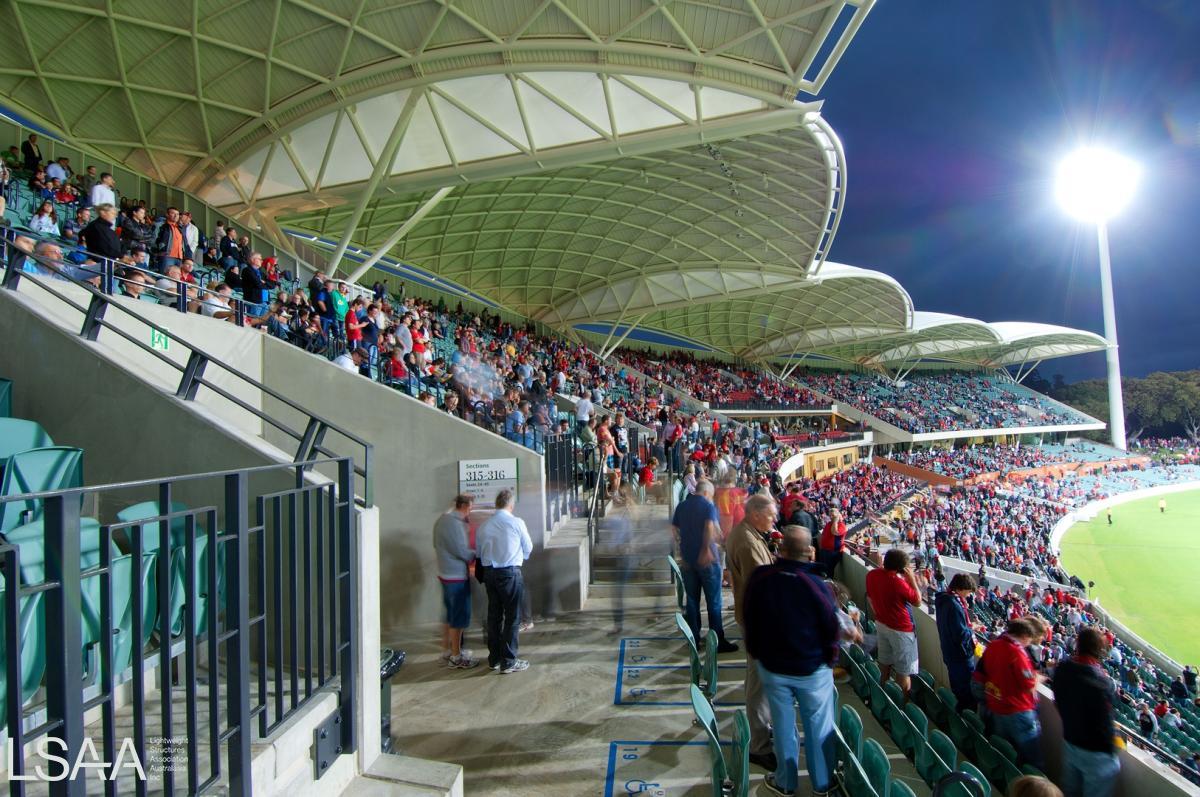 The Adelaide Oval Western Grandstand Redevelopment comprises the partial demolition and reconstruction of the existing heritage listed western members grandstand into a new A$116m 14,000 seat grandstand. The iconic grandstand was opened for the 2010 Ashes Second Test Match to rave reviews.  The diagrid roof forms the centrepiece of the new grandstand achieving structural spans up to 55m with arched 219CHS sections leading to an elegant and exceptionally light (55kg/m2) roof solution to provide the required cover to the grandstand patrons with unobstructed views and designed to withstand 180kph design wind speeds. 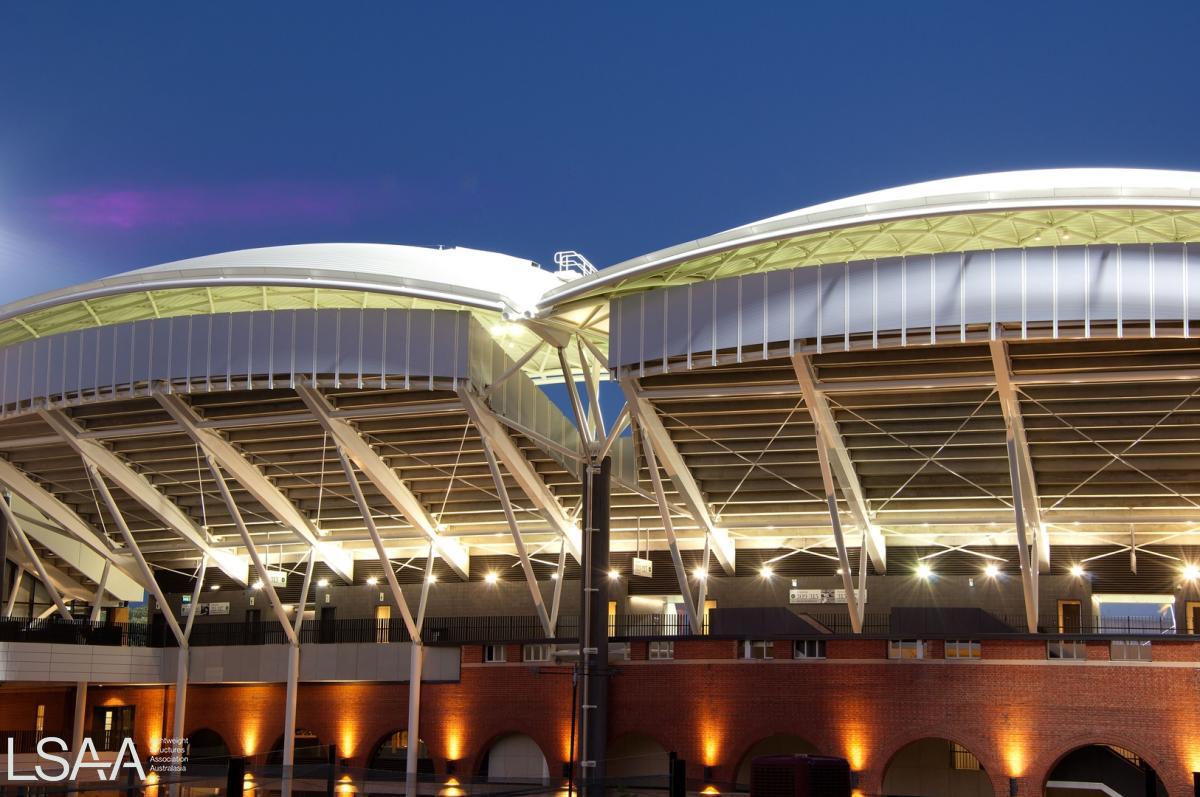 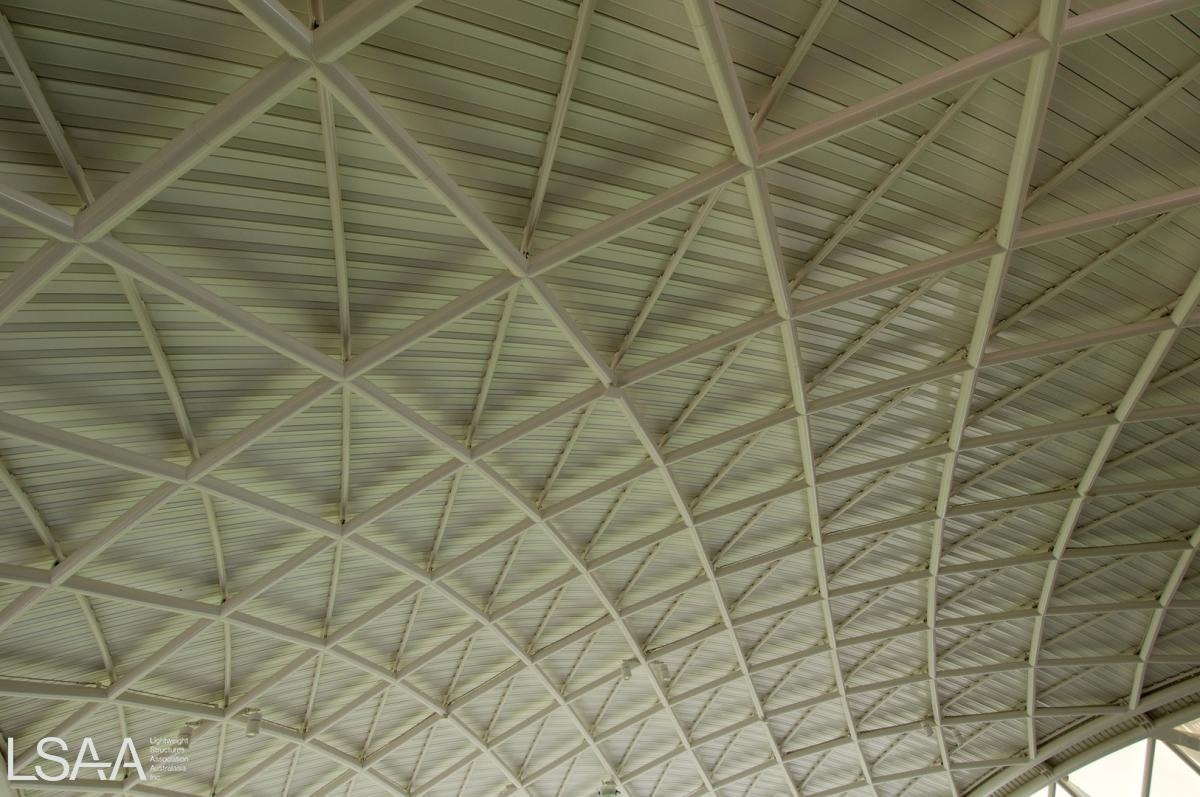 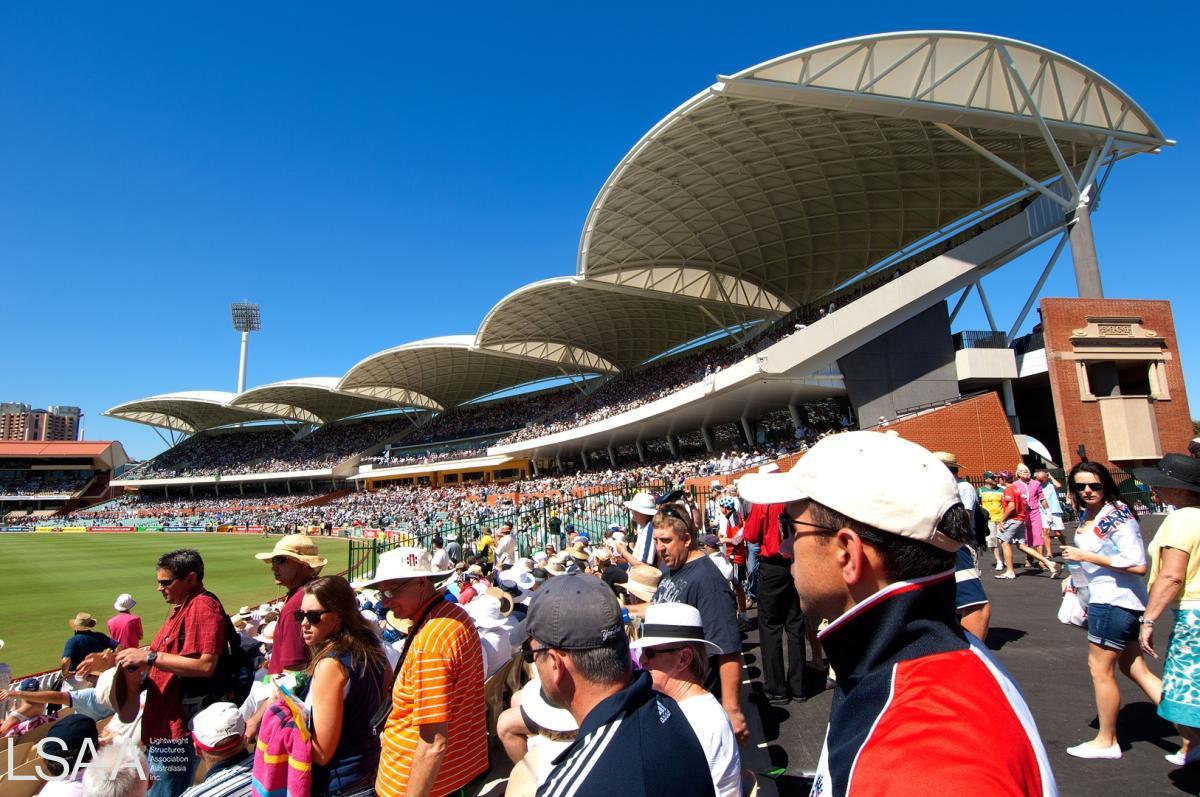 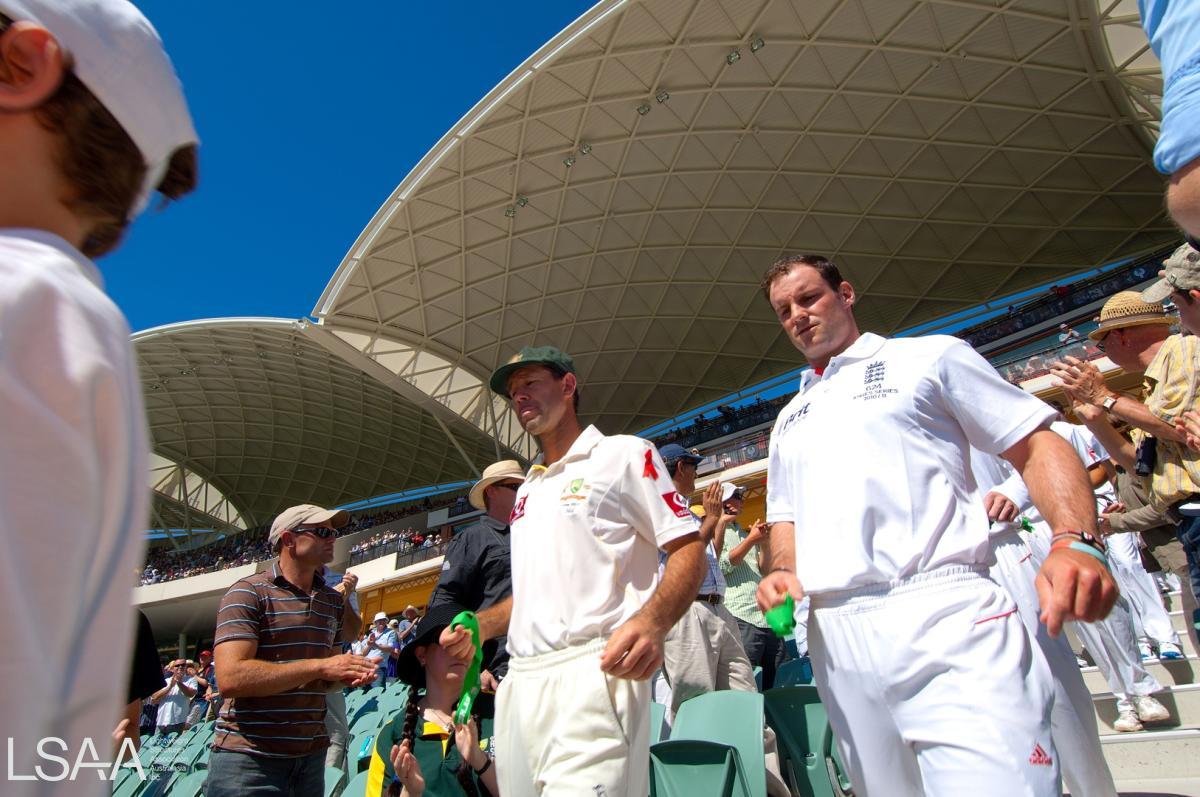 Early in the design the impact of the steel fabrication, erection and site tolerances were identified as of critical importance to the successful implementation of the diagrid roof design. To accommodate this the Steel Subcontractor was invited into the design team early at 50% completion to workshop with Aurecon, the Architects, Managing Contractor and Client to provide the best for project solution and ensure that the final design was constructible within the required design brief, programme and cost plan. This early involvement allowed the design team to consider these parameters early in the process and has resulted in a very successful erection process and outstanding result for the Client.

Key to the success of the Western Grandstand was that the final product must be iconic, it must be quintessentially Adelaide and it must work in harmony with the existing fabric of the ground.  The diagrid roof forms the centrepiece of the new grandstand and is divided into 5 main sections with the central dome drawing the eye to the historic Giffen Stand – the oldest party of the existing fabric. The use of a diagrid for a stadia roof has seldom been undertaken as in the Western Grandstand solution anywhere in the world and never in Australia. This innovative roof is formed using curved 219CHS sections to achieve spans up to 55m, leading to an elegant and exceptionally light (55kg/m2) roof solution, making it one of the lightest roofs in Australia and globally. This support system provides patrons unobstructed views of the ground.

The roof design was optimised through sophisticated analysis and design including:

As evidence of the quality of the Western Grandstand, the project  has recently been awarded an Architecture Award at the Australian Institute of Architects State Awards in the category of Public Buildings and a Master Builders award for excellence in commercial construction over $50m - Landmark Project amongst other awards yet to be announced being judged through the course of 2011-2012.

A critical component of improving patron amenity was improving the roof coverage for both rain events and for shading patrons from the sun.  Coupled with this was an essential requirement for unobstructed views necessitating a cantilevered roof solution.  Aurecon undertook a multitude of design options to achieve these objectives.  The final roof solution comprises 6 roof trusses arranged on a radial grid centred on the existing Giffen Stand.  The roof is supported on feature precast columns that weave through the retained heritage structure beneath with the elegant diagrid shells between.  The resultant roof cantilevers 30m from the rear seats proving drip line coverage for patrons in the mid and upper tiers.  Detailed sun shade modelling also proved all patrons in the grandstand including the lower tier were in shade after the lunch break of the cricket test match.  These improvements dramatically improve the viewing experience of the new grandstand which is the primary driver for patron attendances.

Recognising the required synergies between the engineering and the architecture Aurecon integrated the architectural vision with the engineering design from the outset and throughout the design. Intensive workshops were held in all engineering disciplines and resulted in an optimised design while maintaining the client requirements.  While this approach was adopted throughout the project the key example was the roof design where the architecture and engineering are intrinsically linked.  This involved Aurecon understanding the key architectural drivers and in return communicating the structural behaviour.  The design solution was determined through extensive workshopping with SACA as the client, the architects, managing contractor and cost manager where a variety of roof solutions were considered.  Consideration included the following aspects of the design solution:

The diagrid roof is formed using curved 219CHS sections to achieve spans up to 55m, leading to an elegant and exceptionally light (55kg/m2) roof solution and comprised some 480 tonnes of steel for the 7,000m2 roof area.  Key to the structural system was the roof geometry with the shape generating the structural strength and aesthetic appeal.  Working closely with HASSELL + Cox architects the diagrid form was optimised based on iterations for the arch curvature resulting in curvatures span / 11.5 at the front and rear edges and span / 8.5 at the centre.  The resulting diagrid form was generated in 3 dimensions creating a structurally efficient and visually pleasing roof form.

Design loads were predominantly wind loading where Aurecon carried out cutting edge wind tunnel testing of the roof structure. The unusual curved form of the diagrid roof is not considered in the Australian Standards which provide inaccurate and conservative estimates of loads over this unique curved roof shape. The use of wind tunnel modelling resulted in wind loads being significantly reduced, with significant cost savings in structural steel.  Other miscellaneous loads were considered for service loading for lighting and public address.

Standard steel CHS sections were predominantly used for the project.  The design decisions were based on maintaining the use of standard CHS sections in order to avoid material lead time and availability issues.  This facilitated the order and use of extensive readily available sections to achieve the design form.  The exception was in the connections where the open CHS sections were stiffened and gusseted for load transfer with some locations necessitating the use of solid steel billets for efficient load transfer and dramatic aesthetic appeal with the roof column node a highlight.

In order to fast track the roof design and construction process and to guarantee the high degree of accuracy and quality required early involvement of the Steel Subcontractor was critical.  Following iteration of the design options, Aurecon working with the design team developed the preferred diagrid solution to a schematic 50% status inviting the involvement of the Steel Subcontractor to join the design team and to finalise the documentation.  Key to this was the handover of the conceptual 3D model generated by the design team with the detailed 3D modelling for fabrication undertaken by the steel contractor concurrent with the completion of the architectural and structural designs. This initiative allowed the complexities of the 3D design to be worked through in an expedient manner, satisfying the design, fabrication, transportation and erection requirements.  It also facilitated the integration of the service provisions for the lighting cabling and guttering amongst the structure.

Connections in the diagrid were developed in careful consultation between Aurecon and the Architects and Steel Subcontractor.  The connections were developed to achieve the required load transfer necessitated by the structural design for both the permanent and various temporary conditions requiring close liaison with the Managing Contractor and Steel Subcontractor to optimize the connections for position, tolerance and fabrication aims while ultimately creating a connection of high visual appeal given the exposed nature of the feature roof.

To ensure the appropriate fit on site trial assembly was undertaken on each area of the roof in the Steel Contractors yard where matching of connections was undertaken in a controlled environment facilitating subtle adjustments before completion of the fabrication and shop painting.  A detailed methodology was paramount for the transportation, delivery and erection of the roof including temporary state designs as the near 100 pieces of the roof were sequentially erected and clad insitu.

Safety in Design (SID) for a grandstand structure is paramount and Aurecon championed and led the Client and Project Team through this process.  The SID process incorporated a series of half day workshops where safety risks were identified for all stages of the project – construction, maintenance, operation and even demolition.  Through this early assessment proactive design solutions were incorporated to the roof including the strategic locating of servicing to the roof to only areas easily accessible via boom access off the concourse below and the provision of walk boards and ladder access to the roof and material selections to reduce maintenance demands.

The entire project scope was delivered on budget for the project scope which expanded concurrent with the design as SACA realised further opportunities to maximise SACA’s return on investment.  Benchmarking the construction cost of the Western Grandstand against other stadia projects in Australia demonstrates the value for money achieved with the cost per seat, as a traditional stadia cost measure, being up to 30% lower than similar stadia elsewhere in Australia including the MCG and Etihad Stadium.

The construction and operation of the new Western Grandstand has and will continue to provide extensive benefits to the community and economy.  Throughout the construction some 588,629 person-hours were worked on the site equivalent to approximately 188 people full time for the duration of the construction period and 360 people at peak.  This economic activity occurred through the Global Financial Crisis and provided a vital source of income to many South Australian trades and contractors through the period.

With Adelaide Oval commanding more use (sporting events and other events such as business gatherings, weddings, parties, conferences etc) employment throughout the operation of the facility is also significantly increased having a positive benefit to the South Australian economy and community.  Additionally the Western Grandstand Redevelopment has sparked the subsequent upgrade of the Oval as part of the $535m Redevelopment and the greater riverbank precinct.

With in excess of 130,000 people attending the opening test match the popularity of the Grandstand seems assured and the project delivers the SACA members world class facilities as well as the opportunity to attract a variety of events.