A link to view details (non-engineering) of the stadiums for the 2010 World Cup in South Africa:

The 2010 Fifa World Cup will be played out in 10 newly built or upgraded stadiums, in nine South African cities.

Five are existing stadiums, all of which have been upgraded, with the showpiece Soccer City in Johannesburg having undergone a major upgrade. The remaining five have been built from scratch - and completed on schedule.

Demolition and groundwork began in 2006, with construction of all the major facilities starting in February 2007. South Africa’s construction industry, which has substantial experience in large-scale infrastructure development, was consulted about the stadium timelines - and it was agreed that the dates were realistic.

Intensive planning has gone into ensuring that the stadiums are versatile, multipurpose facilities able to be used for a number of sports, as well as for entertainment and other community uses, long after the final whistle of the World Cup is blown.

The five upgraded stadiums are the Royal Bafokeng Stadium in Rustenburg, Free State Stadium in Bloemfontein, Loftus Versfeld Stadium in Pretoria, and Soccer City and Ellis Park in Johannesburg.

Soccer City on the outskirts of Soweto is the flagship stadium for the World Cup, a huge structure modelled on the shape of the calabash, an African cooking pot. Built in 1987, Soccer City has been enlarged and completely transformed by a massive reconstruction, with the west stand the only remaining section of the original stadium. For the World Cup it will have a capacity of 94 500 seats, and 88 430 thereafter, making it the largest stadium on the African continent.

Ellis Park in the inner city of Johannesburg is home to the Golden Lions rugby club and Orlando Pirates football club, and was the setting for South Africa's triumphant win in the 1995 Rugby World Cup. An existing stadium built in 1982, it underwent minor upgrades for the World Cup. Ellis Park has a capacity of 61 639 seats.

Built from scratch in the beautiful suburb of Green Point, Cape Town Stadium has views of both Table Mountain and the ocean and, in the distance, Robben Island. Built on Green Point common and within walking distance of the popular V&A Waterfront, it has a capacity of 66 000 seats.

Loftus Versfeld Stadium is one of the oldest stadiums in South Africa. It has been used for major sporting events since 1903, and the first concrete structure, which could accommodate only 2 000 spectators, was built by the City Council of Pretoria in 1923. It has undergone minor improvements for the 2010 Fifa World Cup, and has a capacity of 49 365 seats.

A new stadium built near the beachfront, Durban Stadium has transformed the city's skyline. It has been designed as a multipurpose venue, with attractions such as restaurants, shops, an art gallery and children's play areas. There's also a cable car up its arch to a top platform providing panoramic views of the city and the ocean, and even bungee jumps from the top of the arch. Its total capacity is 69 957 seats.

Nelson Mandela Bay Stadium was the first of South Africa's new 2010 Fifa World Cup stadiums to be completed. It has a capacity of 46 082 seats.

The Royal Bafokeng Stadium was built by the Bafokeng Nation, which owns much of the platinum-mining rights in North West province. It underwent minor renovations for the World Cup, increasing its capacity from 38 000 to 44 530 seats, with the main west stand enlarged and given a new cantilever roof.

Home to the Cheetahs rugby team and Bloemfontein Celtic football team, Free State Stadium was built in 1952 and upgraded in 2008 to increase its capacity to 45 058 seats, as well as improve security, lighting and turnstiles.

With host city Nelspruit's proximity to the Kruger National Park, Mbombela Stadium has a quirky wildlife theme, with large giraffe-shaped orange girders facing outwards on its exterior, and funky zebra stripes on the seats inside. Built from scratch, the stadium has a capacity of 43 589 seats.

With a design inspired by the baobab tree, a common sight in Limpopo province, the new Peter Mokaba Stadium has a capacity of 45 264 seats. 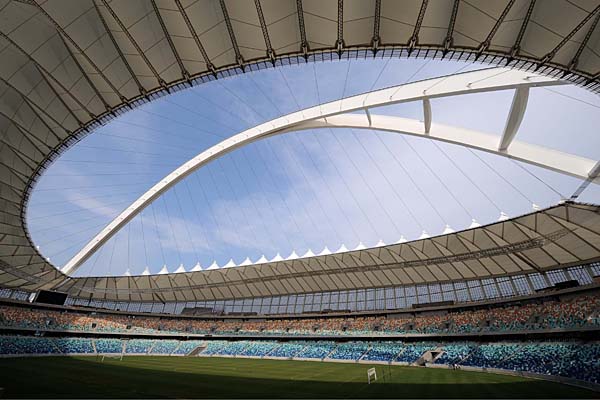