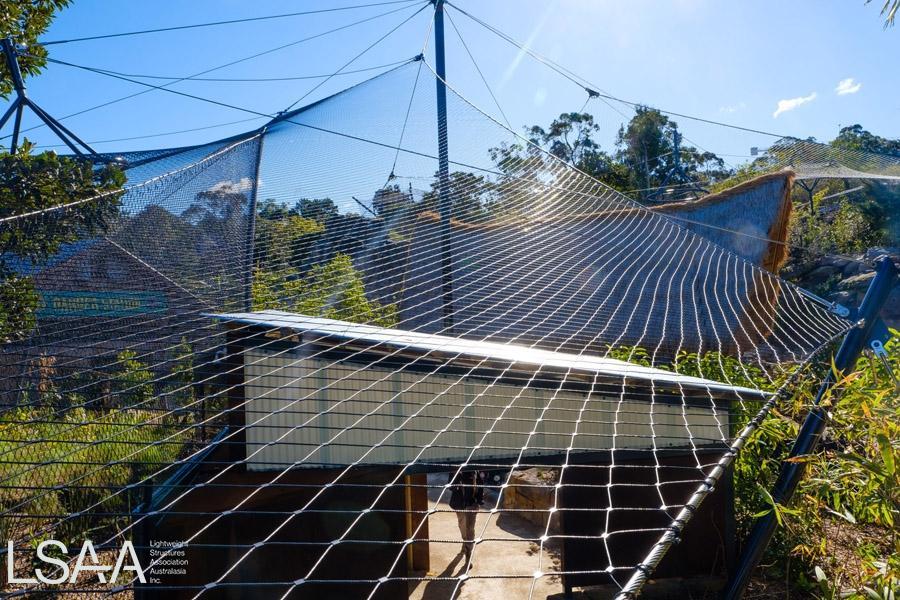 The mesh is tied to catenary cable boundaries connected to masts with tieback cables and is pushed / pulled up with 4 flying masts in each enclosure. The flying masts are supported on a structural cable net that is attached to a large central mast and tied back to the perimeter masts structures. 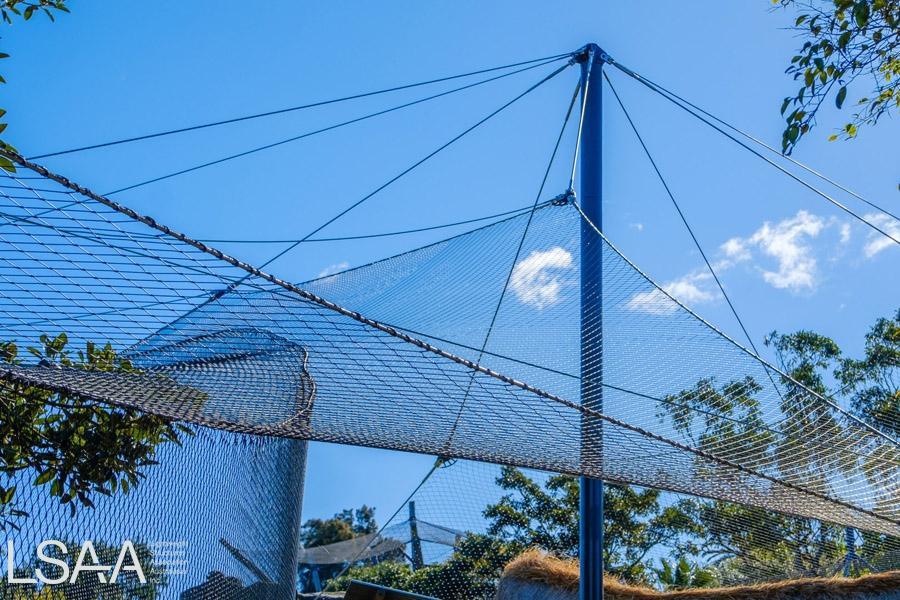 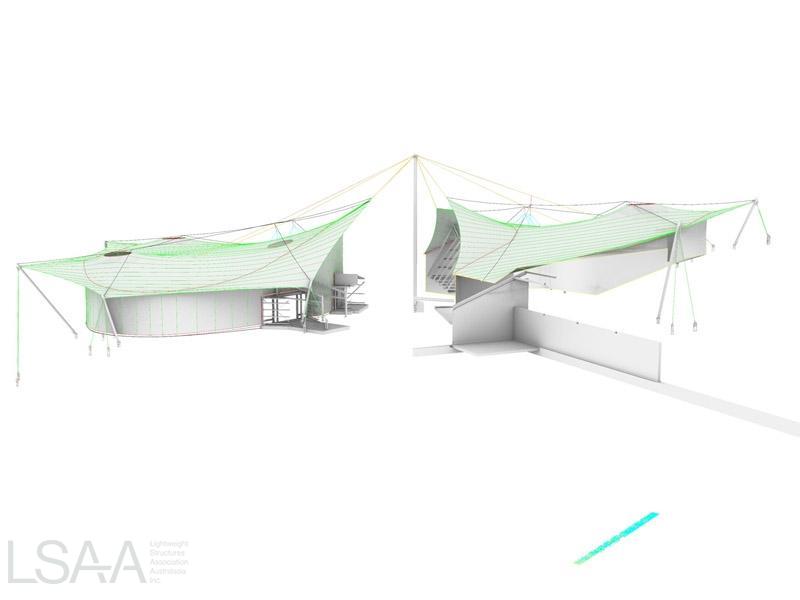 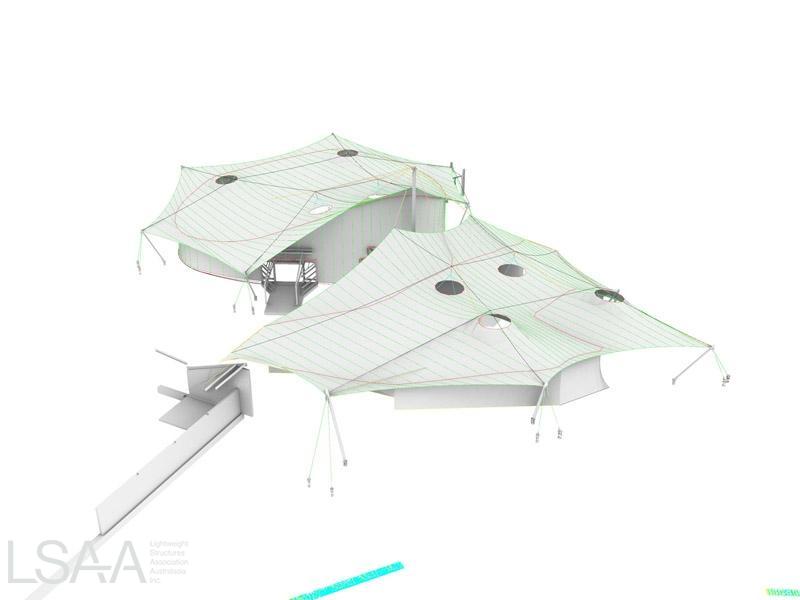 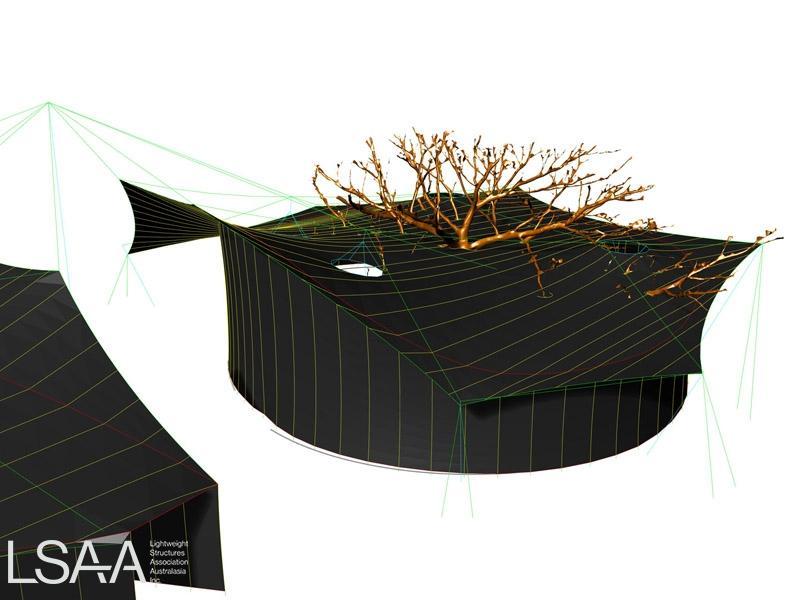 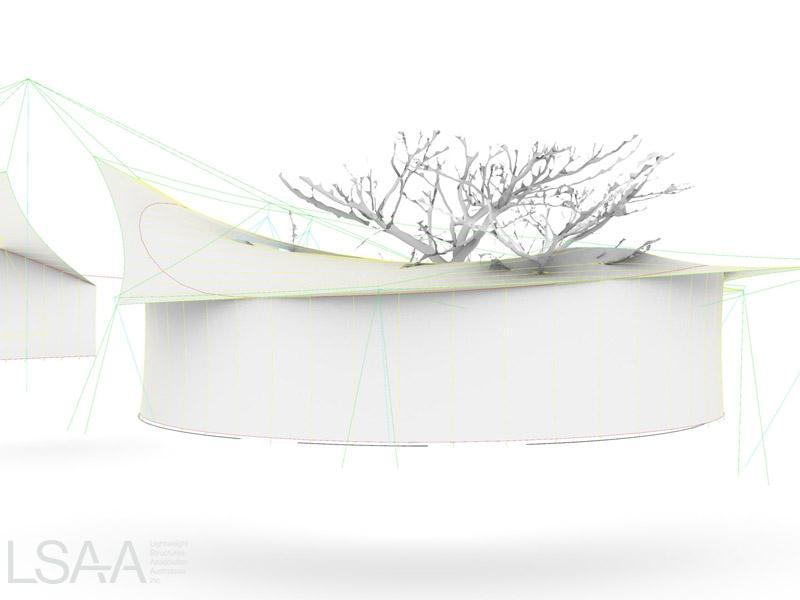 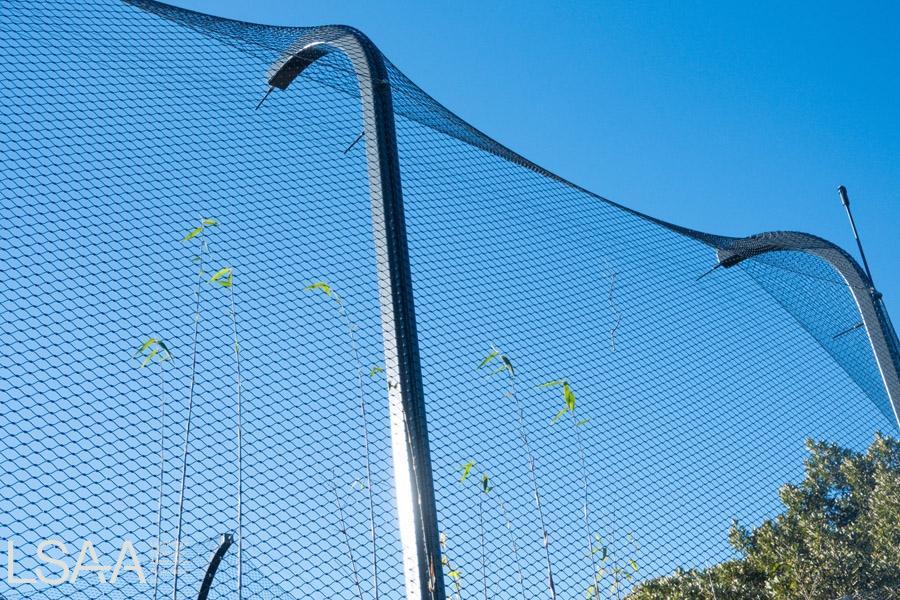 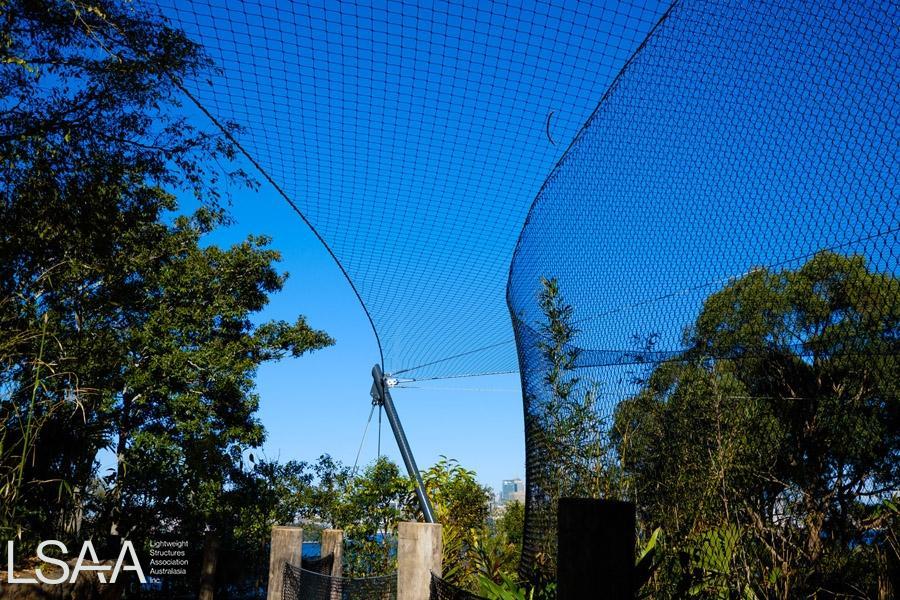 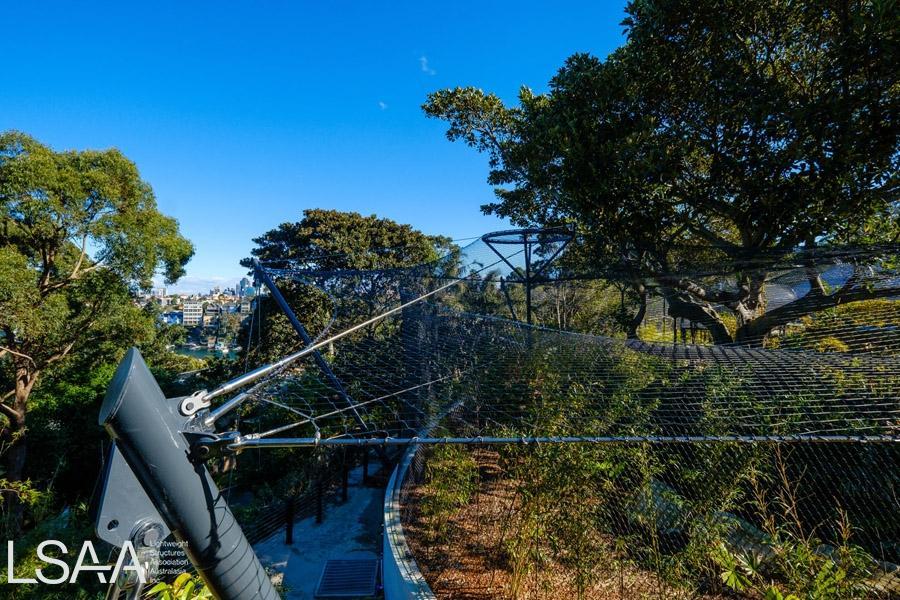 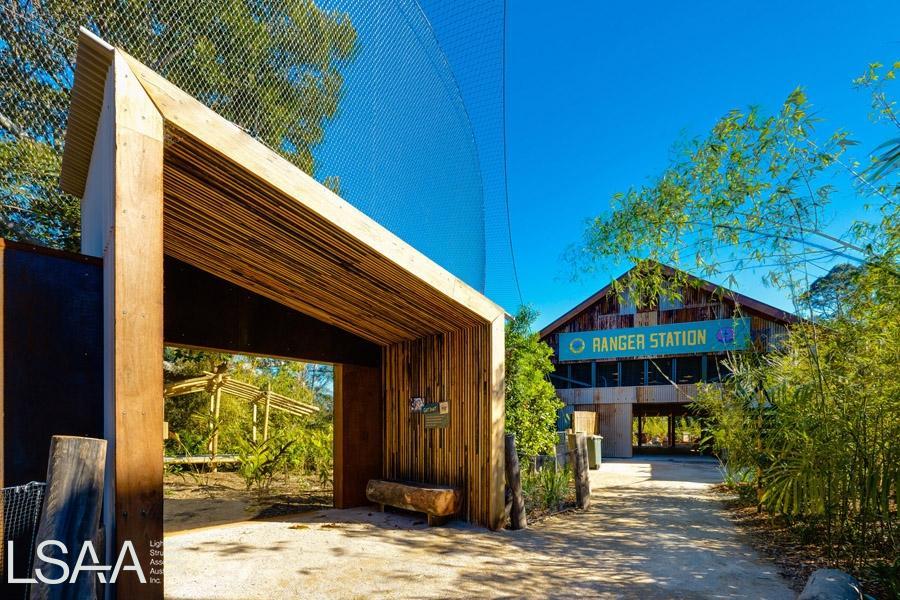 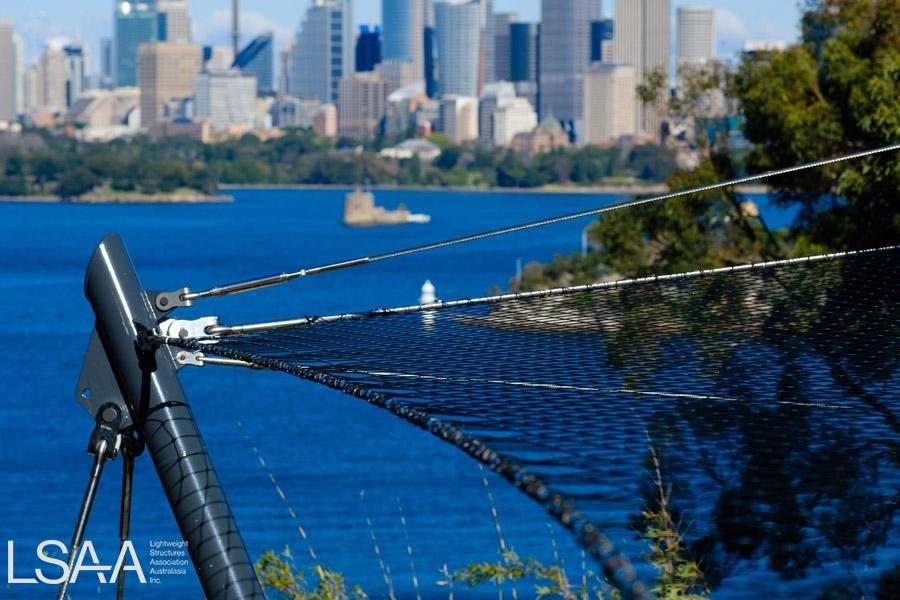 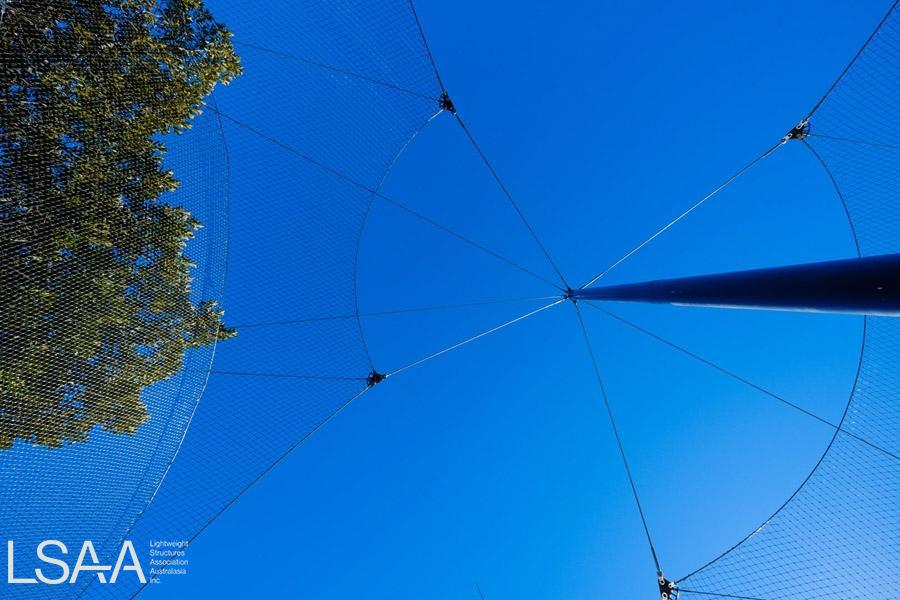 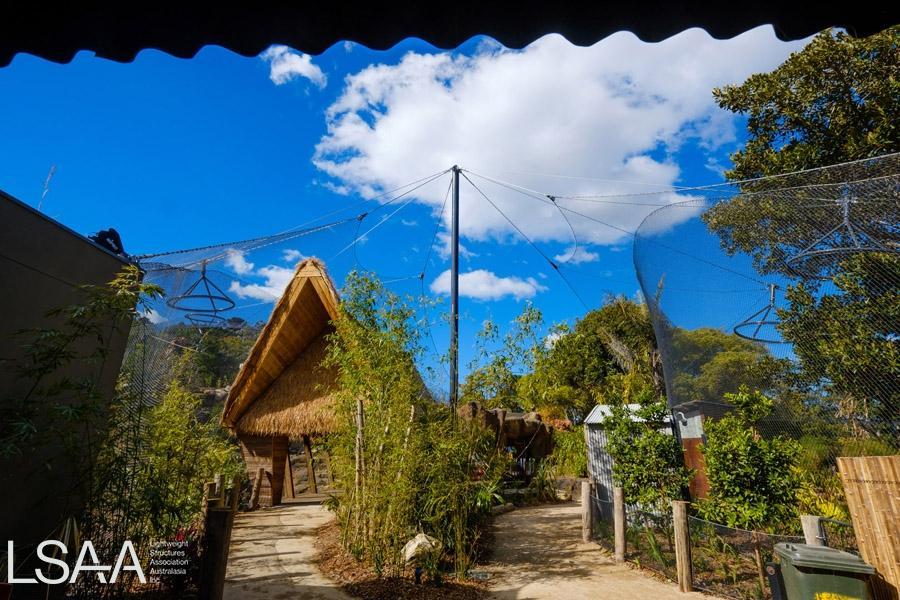 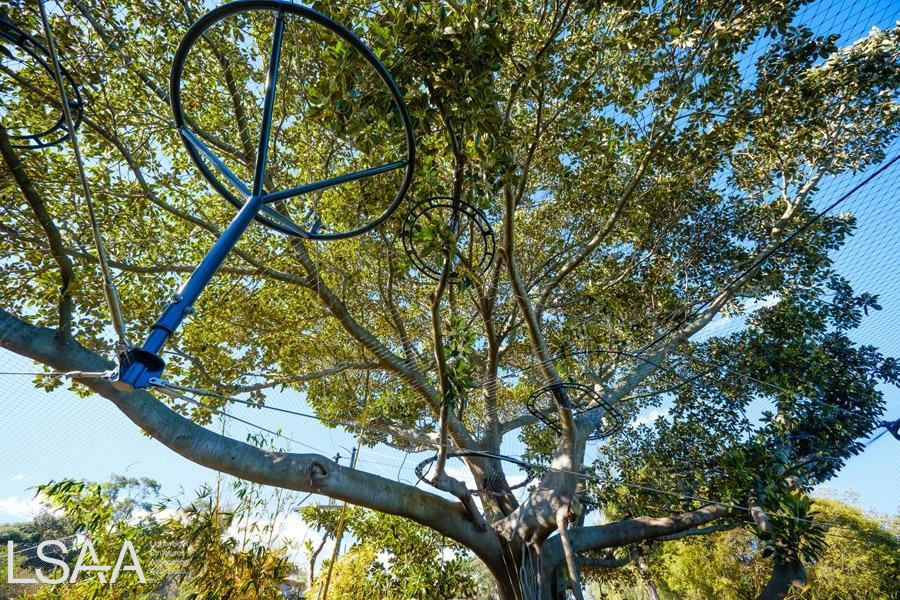 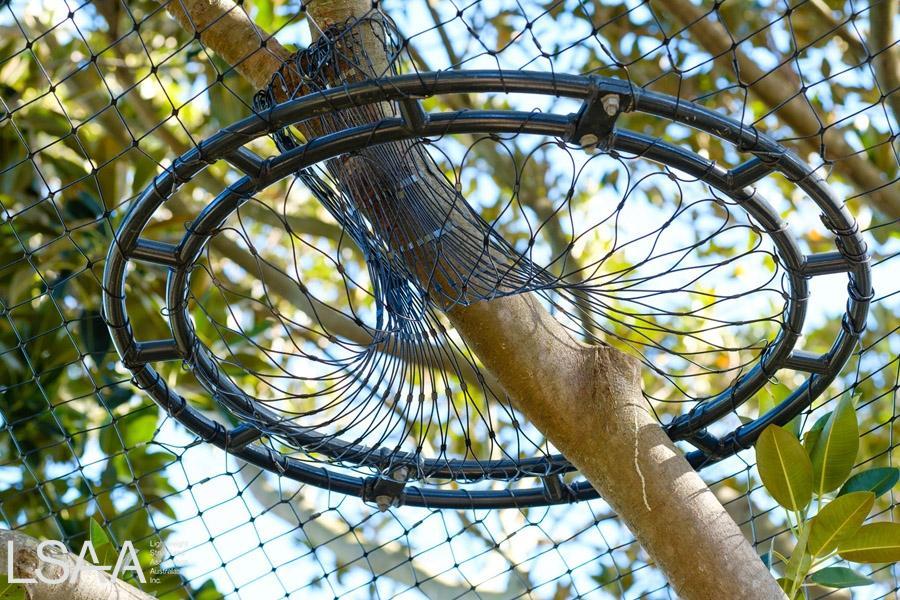 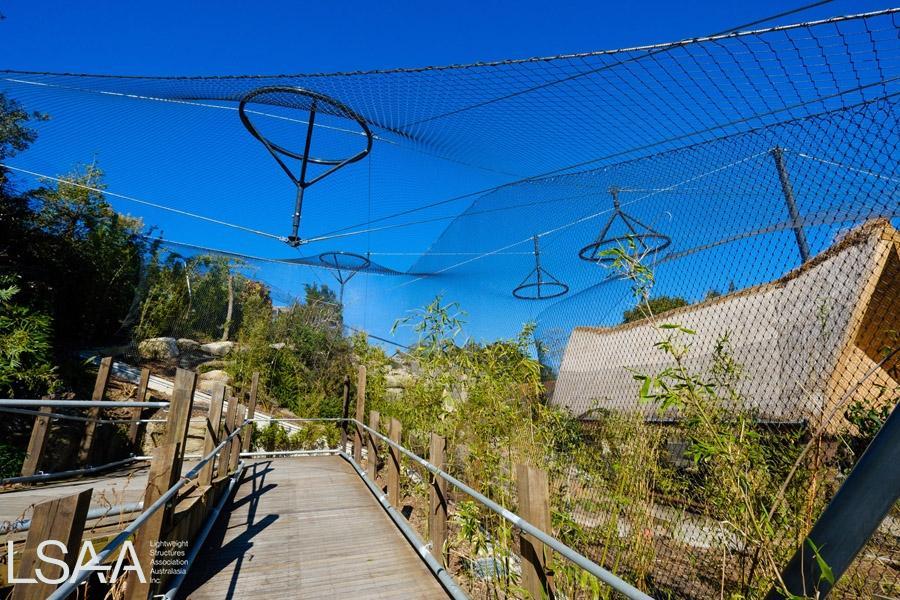 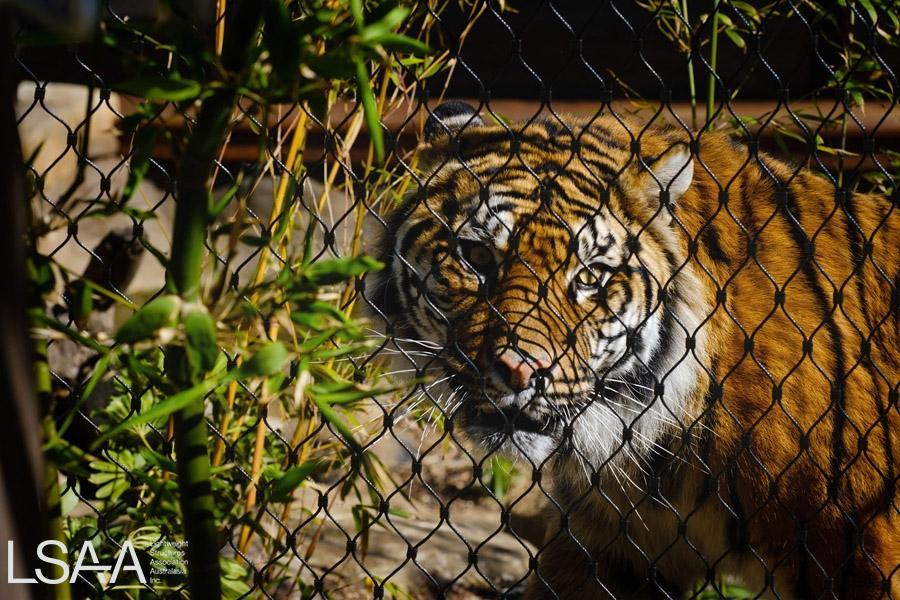 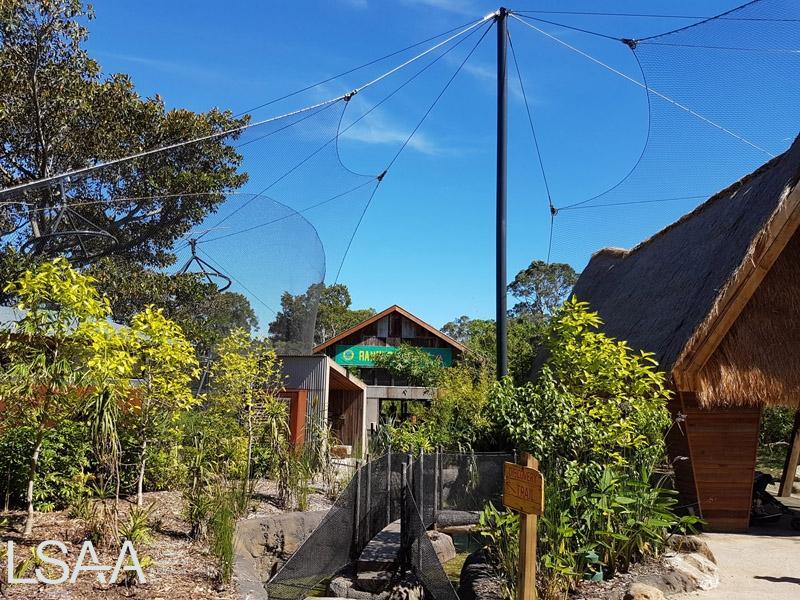 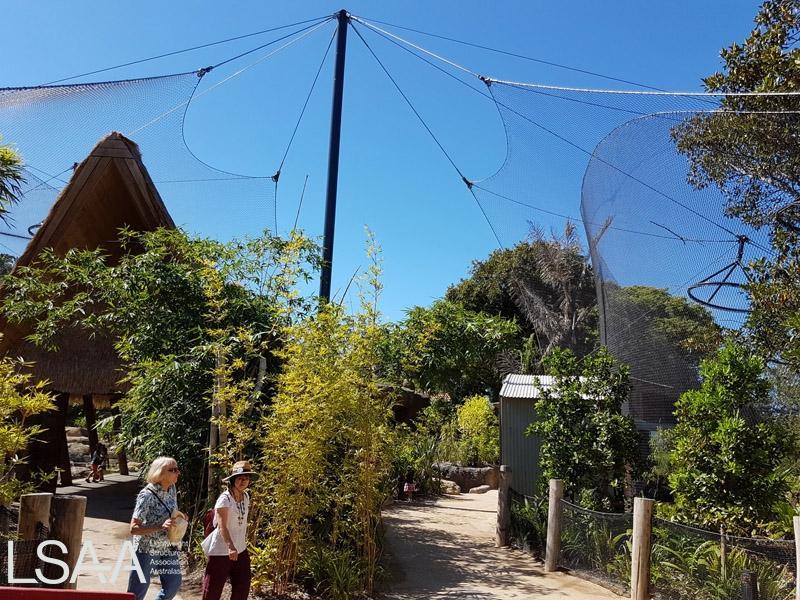 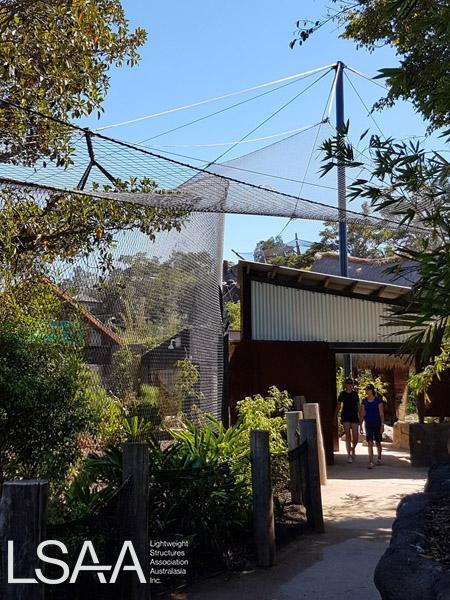 On these two enclosures, there are also free form tensioned X-Tend Mesh walls that are suspended from the X-Tend Mesh roof structure and tied to the ground or to other viewing and husbandry buildings projecting into the enclosures.

The mesh walls act as the barrier to retain the tigers and are designed to absorb the impact of an adult tiger colliding with the wall running at a speed of 40km/hr.

The roof of Enclosure 3 (colloquially named “Enclosure Tree”) had an even higher degree of difficulty as it is interleaved through an ancient, heritage listed Moreton Bay Fig tree.  Suspended within the roof is a series of pre-planned rings that frame the opening for large tree branches as they project through the X-Tend Mesh roof surface.

Enclosure 2 is a more conventional structure with tensioned X-Tend Mesh walls above lower concrete walls.  The mesh is stretched over curved steel frames and has a cable border along its top and bottom edges.

The project team had a reasonable idea of how they wanted the enclosures to look and perform, so we had a good starting point for the mesh form for structural and detailed design; however, we had to develop a full 3D model of the structures to be able to successfully complete the works and to coordinate our requirements with the Main Contractor and other subcontractors.

The structural form was made more complex by the nature of the site.  The enclosure is located on the side of a steep, rocky hill with several large trees including the large fig in Enclosure 3 to contend with both aerially and at ground level where we had to avoid the root structures.

The site was surveyed and the major tree branches digitally scanned to develop a 3D model of the site, the trees around the site and the large fig in Enclosure 3.

The theoretical forms of the mesh enclosures and other structures were also introduced into the 3D model.

The enclosures were constructed from Carl Stahl X-Tend Mesh.

X-Tend mesh is fabricated from stainless steel wire ropes joined together to form diamond shaped apertures with stainless steel ferrules. The aperture of the diamond is notionally regular with internal aperture angles of 60 and 120 degrees.

The shape of the diamonds can, will and did vary across a free form surface and the mesh tension varies as diamond shape changes.

Mesh install tensions vary also.  On other projects we have previously installed mesh at low tensions, but on this structure, in particular the roof structures, were planned and installed at a higher pretension than we have adopted in the past. Unlike tensile fabric, the mesh weight is significant and so getting the install tension right is essential to achieving the required mesh surface geometry and position in 3D after install.

In order to better understand the biaxial stiffness of the mesh we undertook biaxial testing of mesh measuring its behaviour at different pre-stress levels.

Cables and steelwork were fabricated in accordance with the 3D models.

Mesh panels were pre-planned rather than rigorously patterned. Mesh panels were made oversize, but then marked out in the factory with our prediction of where the mesh was expected to cross the cable boundaries and attach to the flying mast rings and the tree ring openings.

Mesh panels were fabricated in strips that could be man handled and spliced together on site to form homogeneous complete surfaces.

Masts were installed propped at correct final positions (including the flying mast rings) and a temporary webbing net was then installed to hold the edge cables in position.

The webbing net also provided support for the X-Tend Mesh as it was positioned and deployed ready for tensioning.

The X-Tend Mesh strips were then manually spliced, and in the case of enclosure 3, threaded around and though the fig tree as planned.

Once spliced the mesh was then tensioned with ratchets gradually lifting it into position, a process that involved working carefully to ensure that once the mesh sat at the correct levels on the site it was also at the correct tension.

Once the mesh was correctly positioned it was adjusted and laced to the perimeter cables and internal rings on the flying masts.