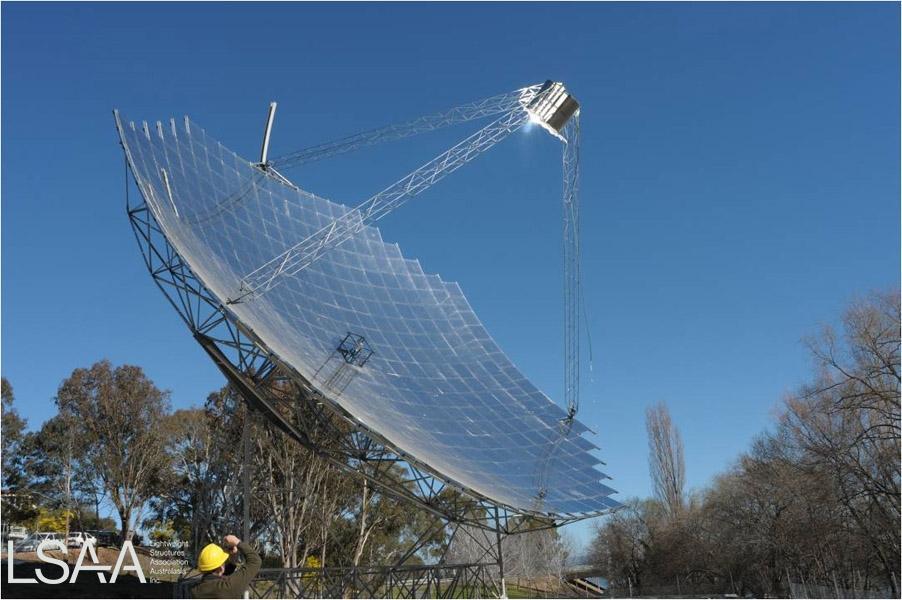 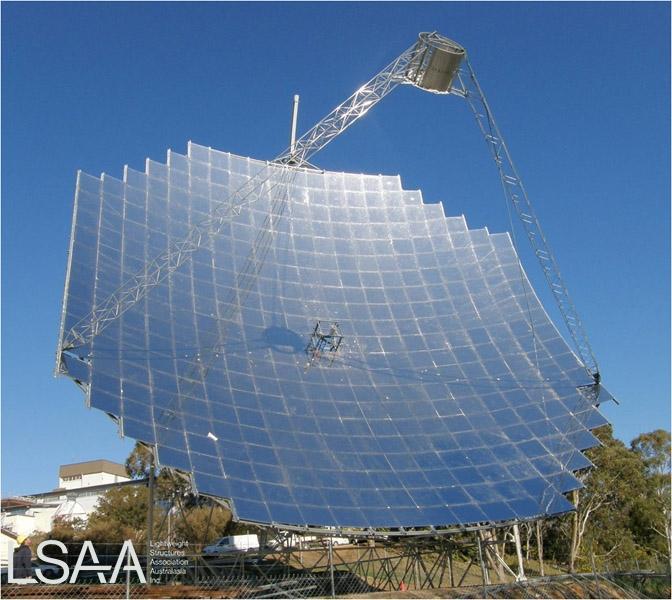 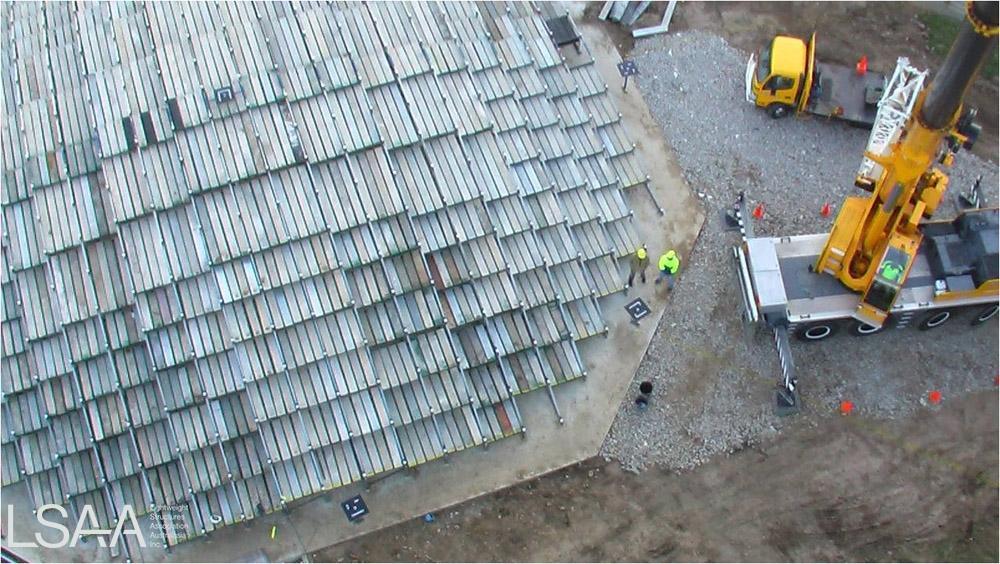 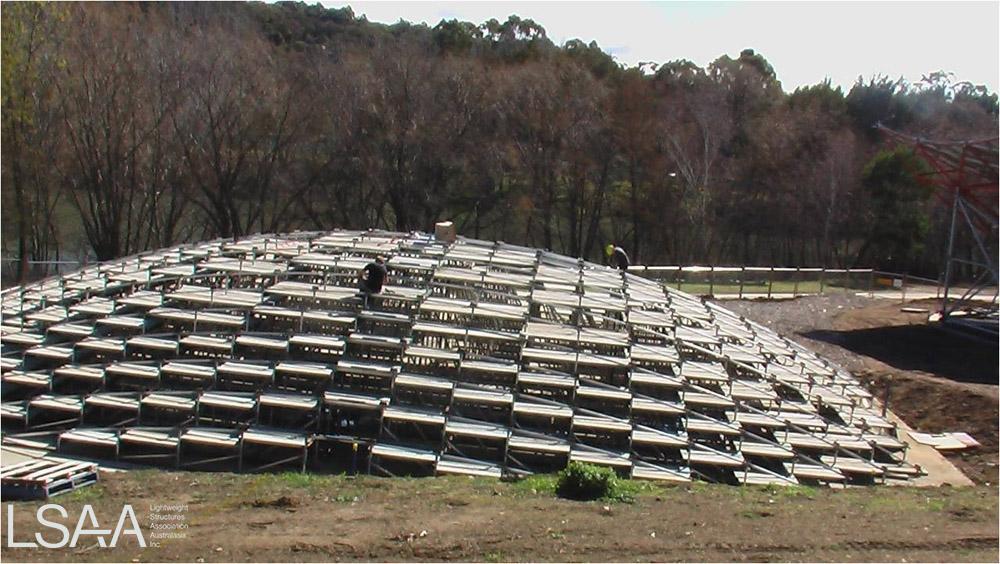 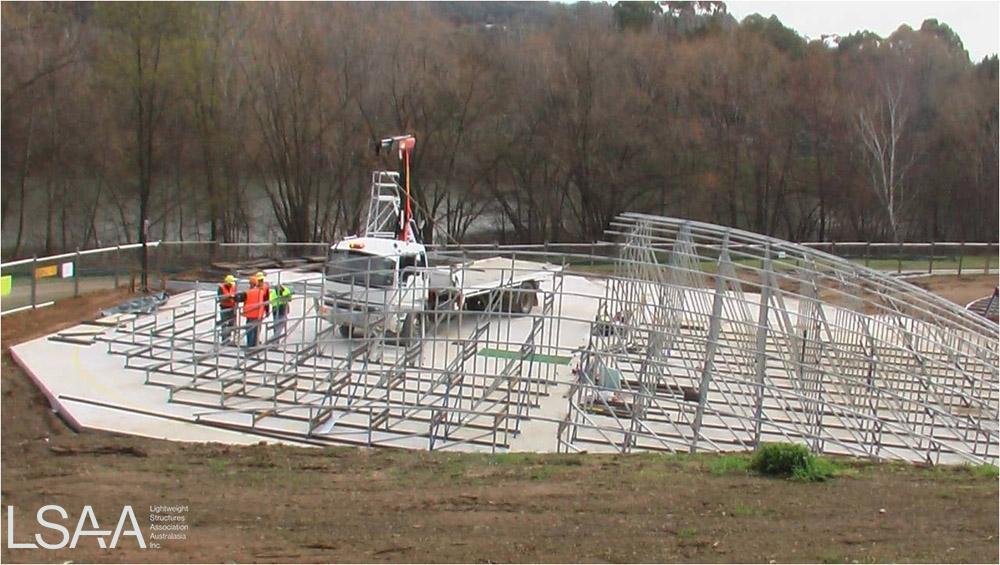 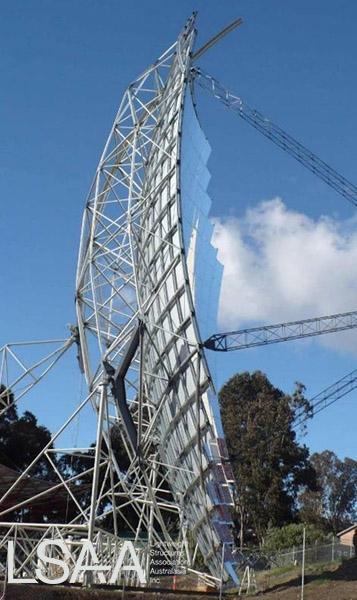 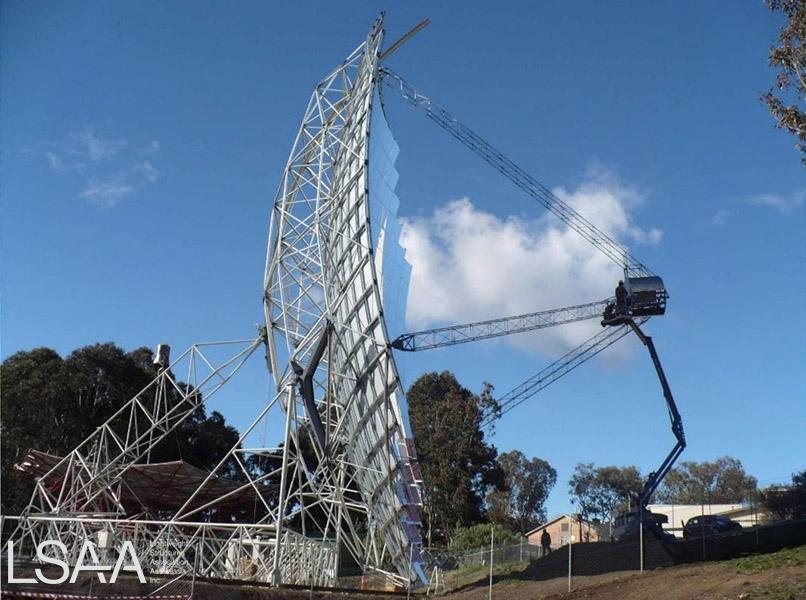 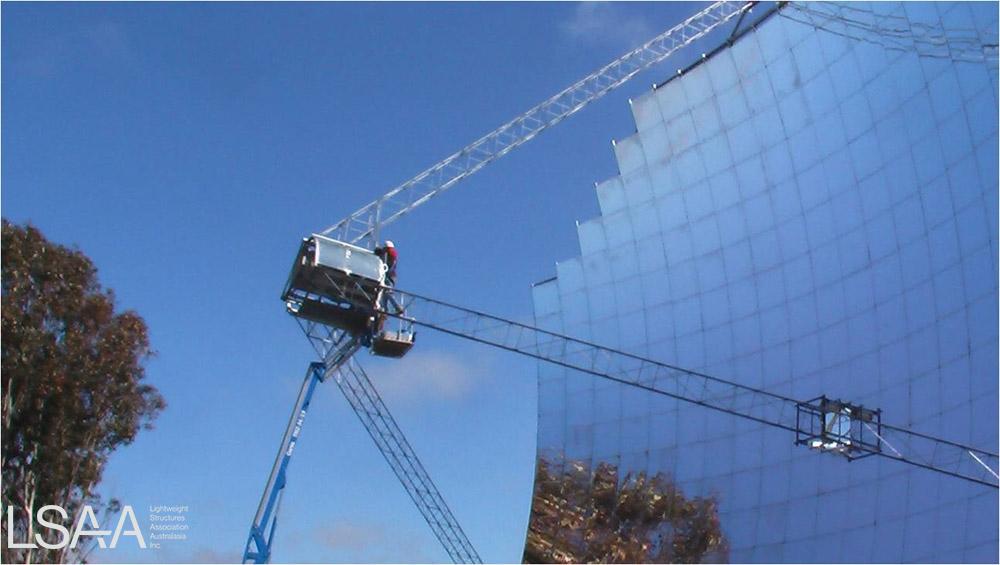 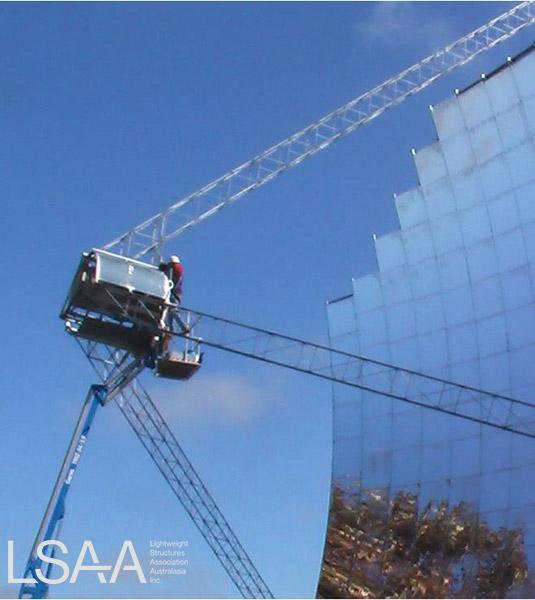 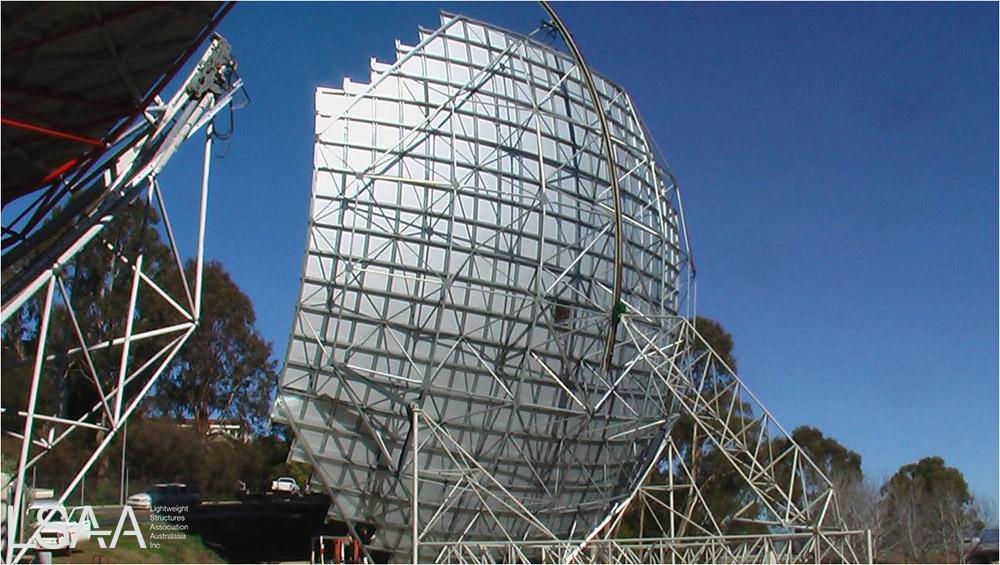 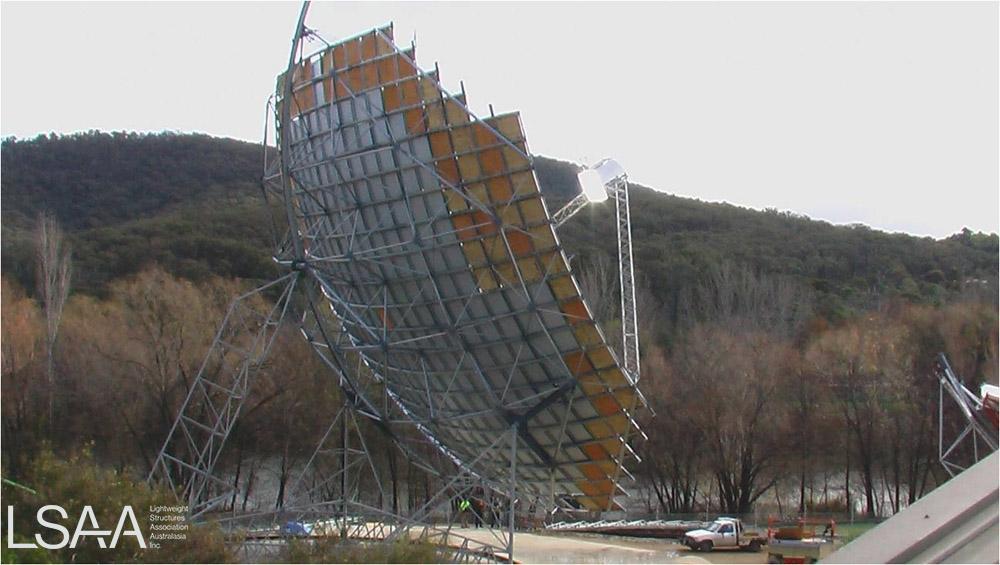 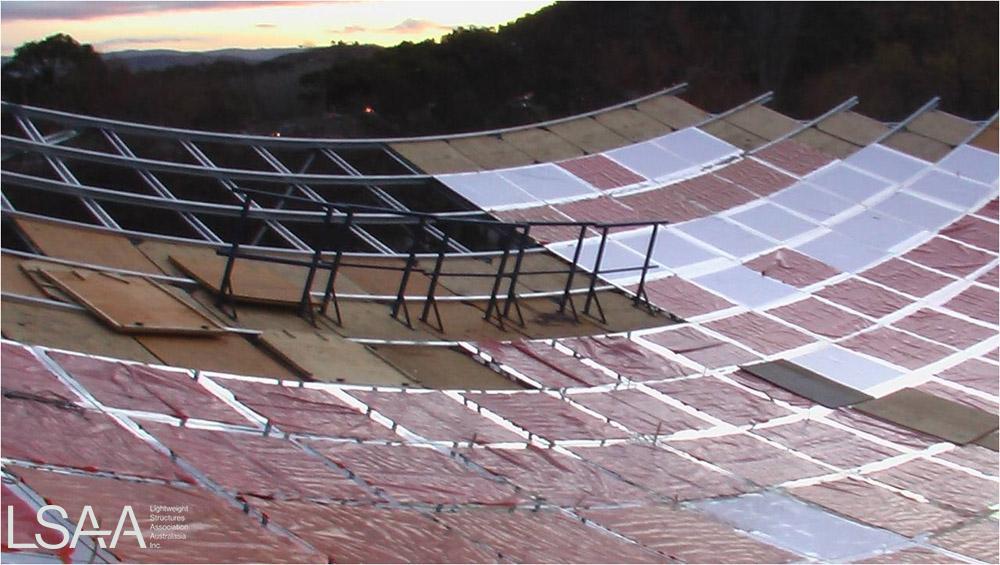 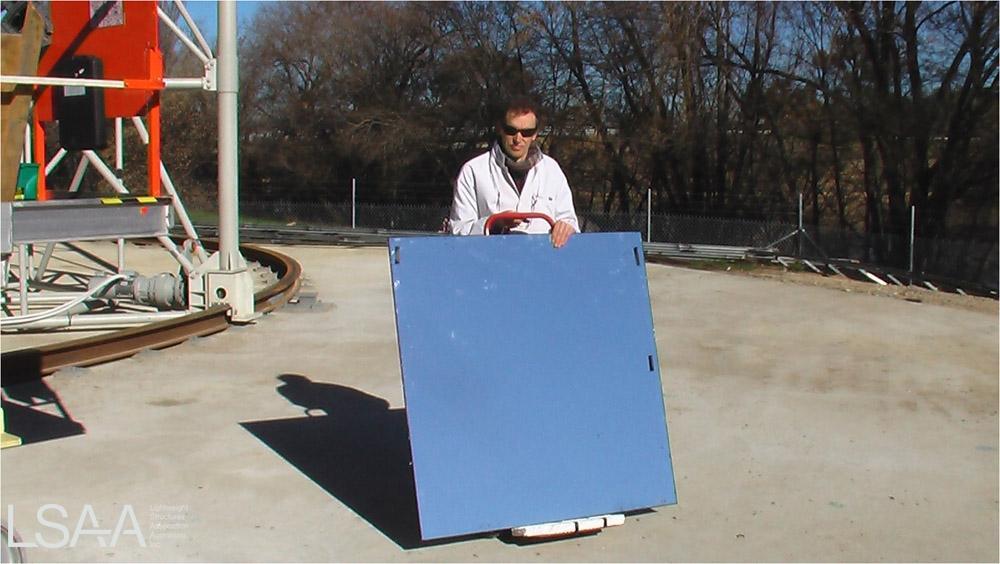 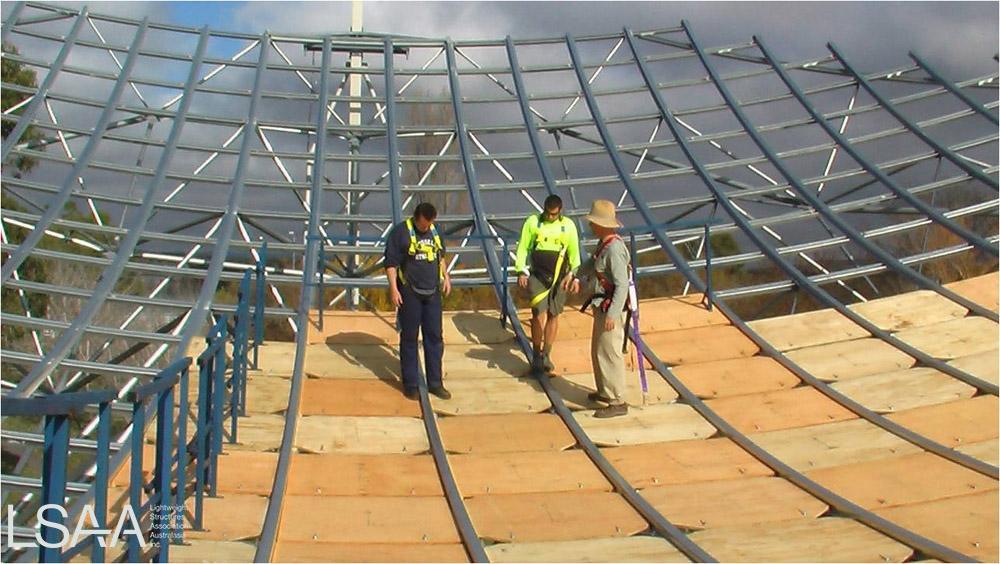 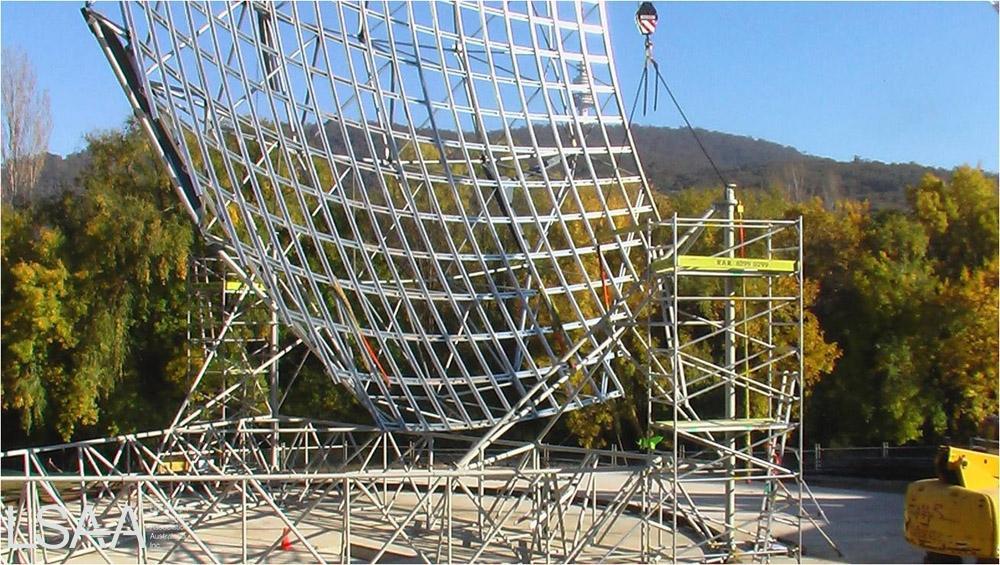 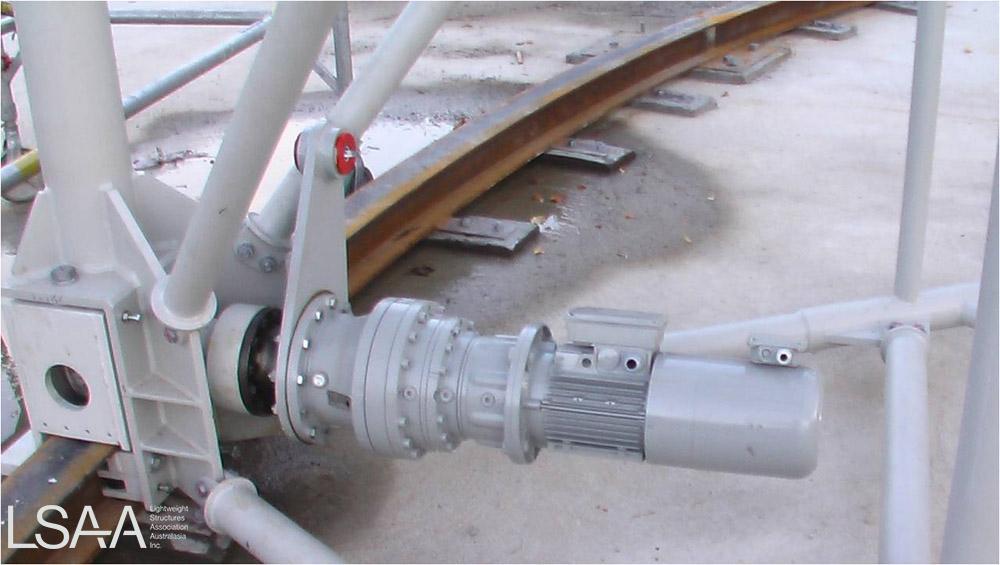 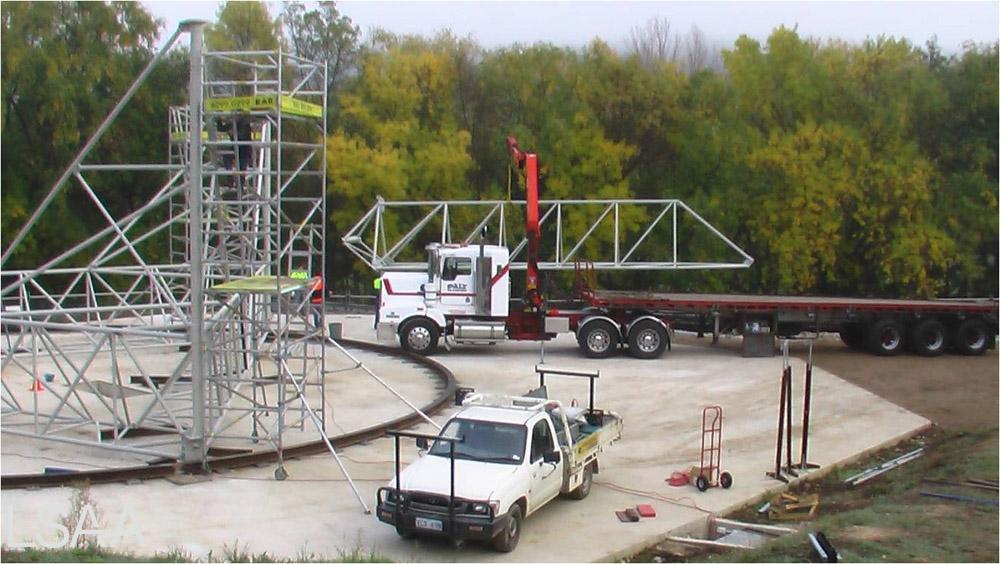 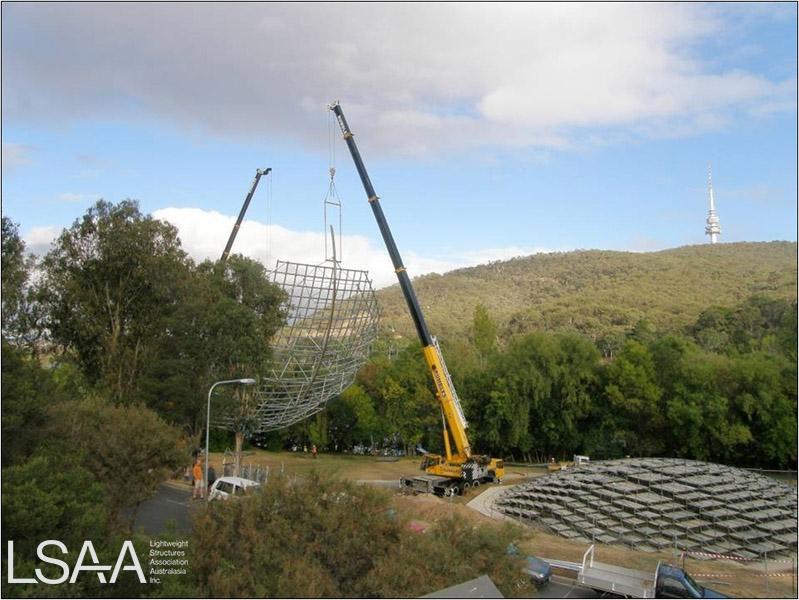 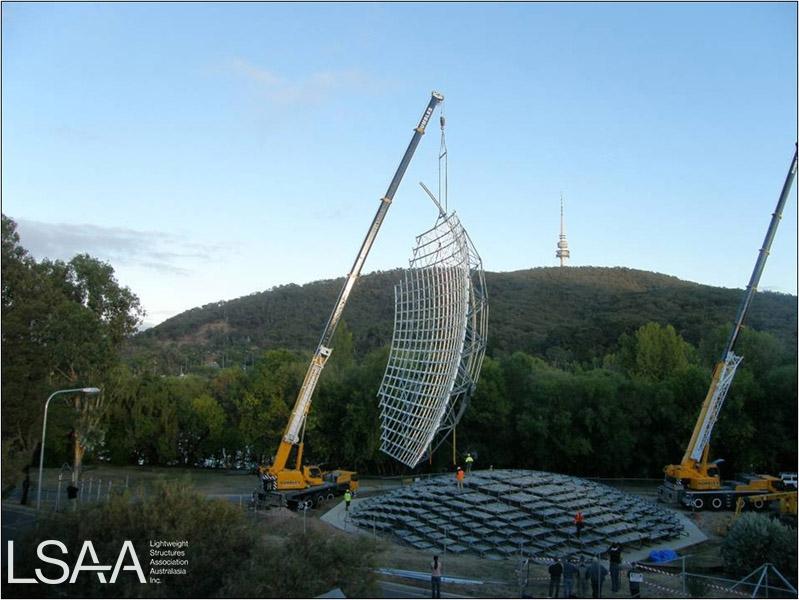 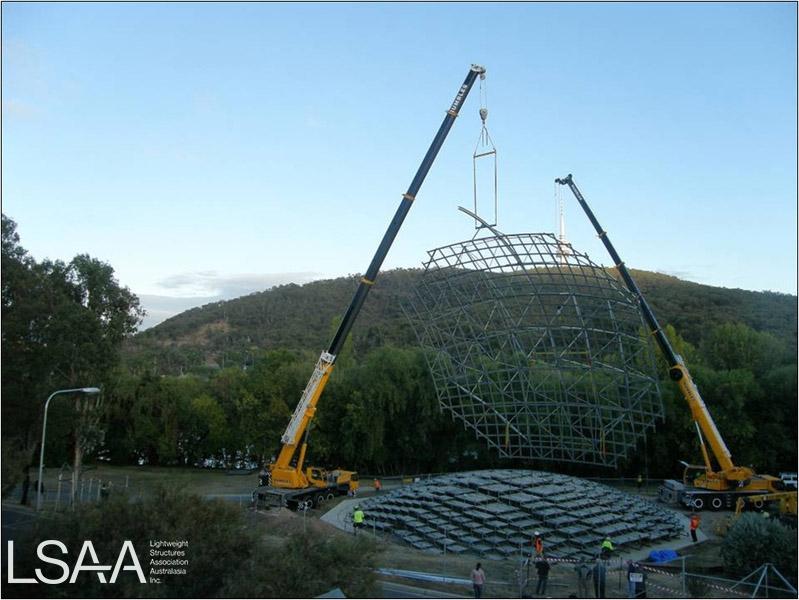 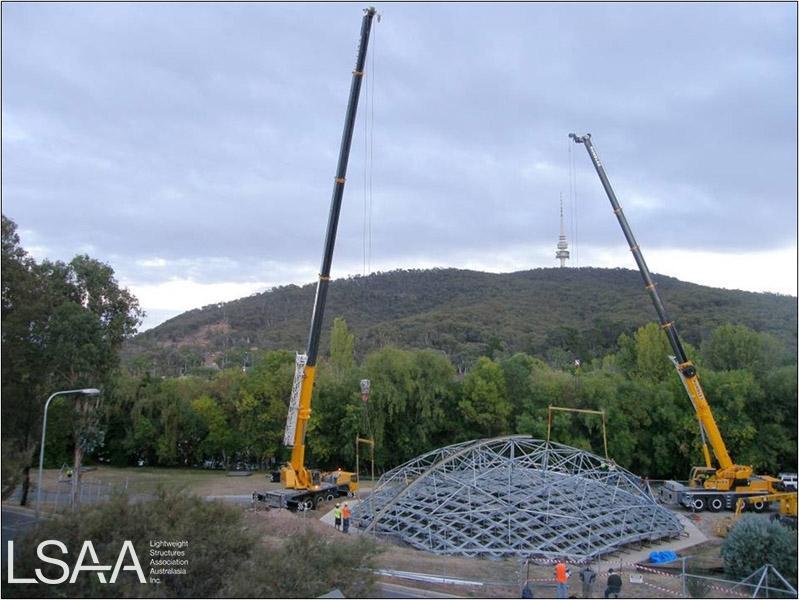 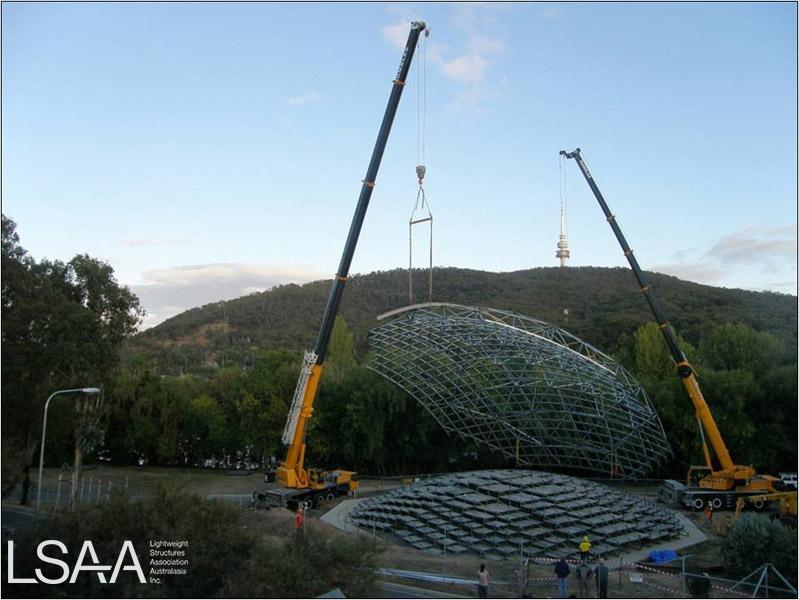 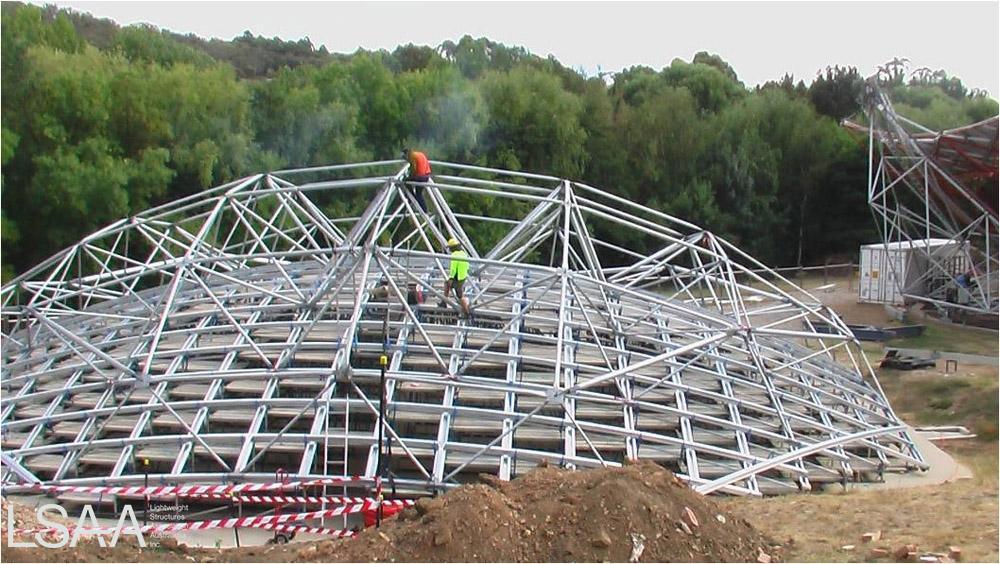 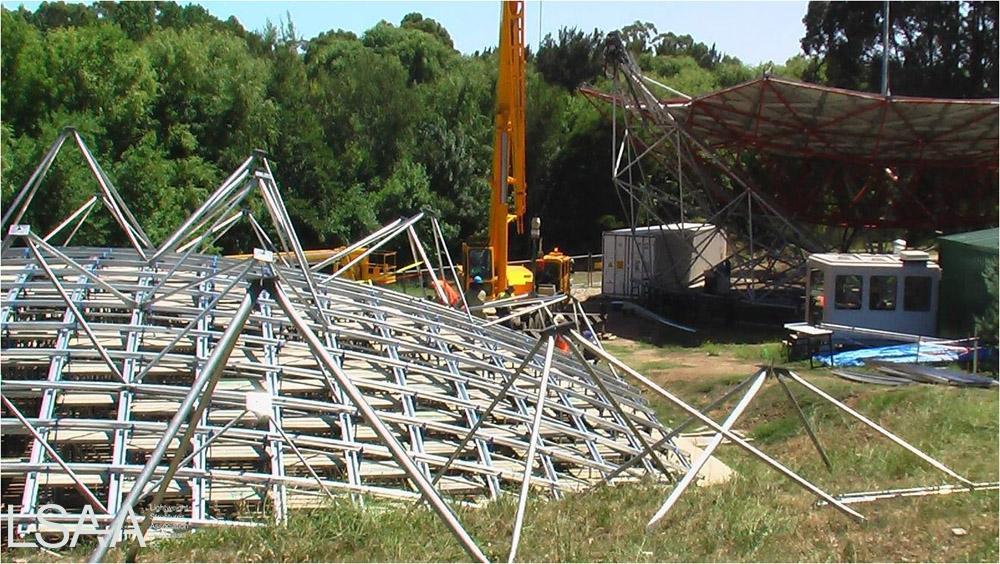 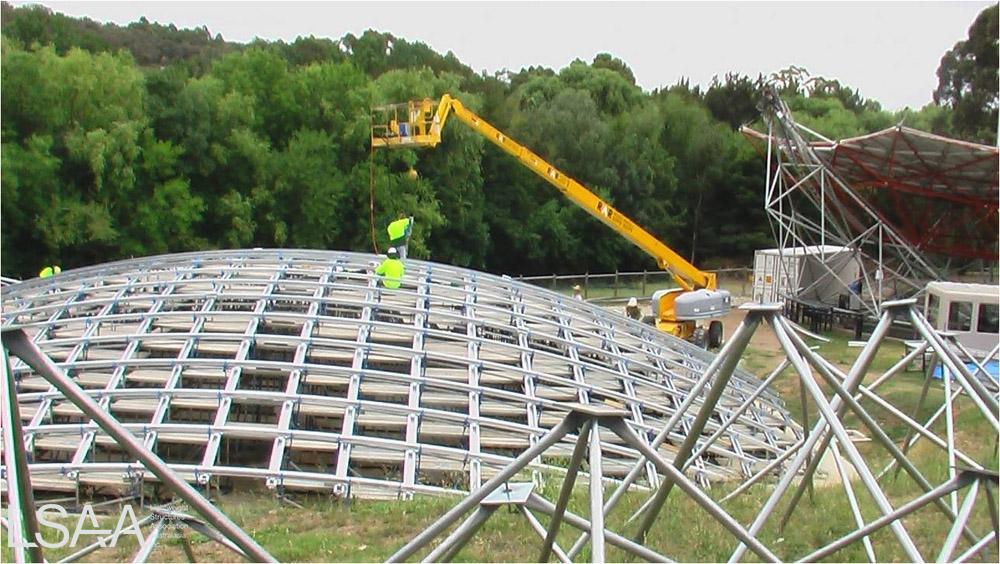 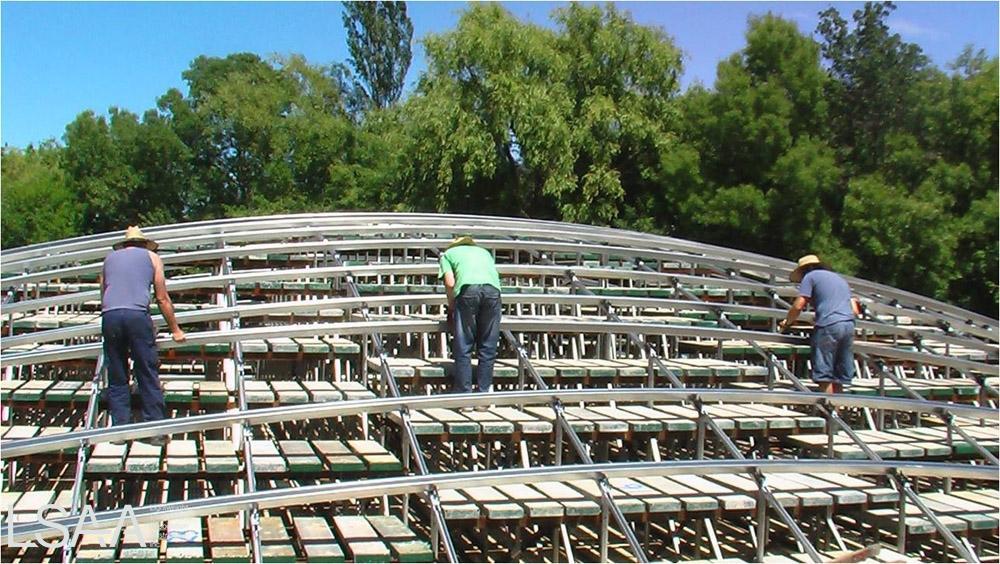 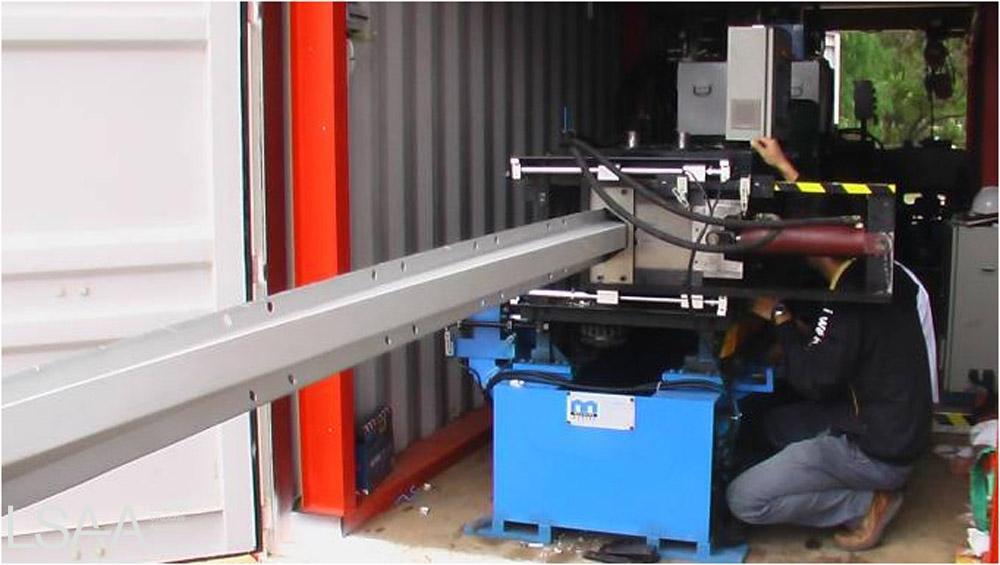 In 2005, ANU dish technology was licenced exclusively to the Canberra-based company Wizard Power Pty Ltd.  In collaboration with ANU, Wizard Power secured support under the Australian Government Renewable Energy Development Initiative (REDI) program, for a project that included the design and demonstration of the second generation Big Dish, suitable for commercial production.

The mission was to design a large-area solar dish to produce energy at minimum installed cost, when mass produced on a large scale. Additional customer requirements including minimising technical risk and maximising reliability. Being attractive to investors, ease of operator training and applicability to a range of energy conversion options, were considered.

After evaluation of options, it was considered that cheaper approaches than Octalock could be found for situations where many duplicate unites are to be made.  The new design instead incorporates a very accurate re-useable jig, to provide the accuracy of the frame supporting the optical surface. Novel fabrication techniques have been employed to form the space-frame on this jig in a manner that is rapid and cost-effective. The emphasis is to establish a 'Factory-in-the-Field' concept for manufacture of large dish arrays. A key element of this is the on-site production of roll-formed structural sections from steel coil stock.

‘Microstran’ software was used to analysis forces in frame elements, ‘Strand’ was employed for analysis of stresses in key elements, and ‘SolidWorks’ was used to visualize overall construction and to produce working drawings.

Mirrors were identified as a key driver for the design. A Glass on Metal laminate approach using thin low iron back silvered glass mirrors had previously shown to be a durable and effective approach. For dish mirrors, forming into multilayered cored panels has proved to be an effective way of producing shapes with good optical quality. Previous studies (4) indicated that a dish could be built with good optical performance using standard spherical element mirror panels which would suit mass production.  Materials, optical and structural constraints were reviewed to choose a square rather than triangular unit and to determine an optimum unit size. It was identified that the stiff panel design needed for optical quality meant that there was an opportunity to leverage this to a contribution to the overall dish structure. Such an integrated approach is key to a cost optimized outcome.

Wind loads were a major driver in determining the structural design. The appropriate structural design code for Australia (5) identifies ultimate limit state wind speeds based on location, height and other factors. The actuation geometry taken from the SG3 design, has the dish parked horizontally for maximum storm survive-ability.  For the parked dish height  chosen, a 162kmh limiting wind speed was indicated.

Mirror panels also incorporate Zincalume sheet together with the mirror glass and other materials in a proprietry formulation.

Silicone based sealants have been used to attach the mirror panels to the frame.

The assumption that some form of space frame would be needed was made early in the process. Based on this a review of the cost effectiveness of various material approaches to supporting an indicative load over a 3m span was carried out. Interestingly, wood or reinforced concrete were shown to be most cost effective but deemed impractical. Aluminium or galvanised steel tube sections were shown to be almost identical in cost effectiveness. Steel was chosen based on the wider applicability of fabrication techniques for large structures.

Describe the fabrication techniques and equipment used, including special methods employed and level of tolerances required:

Site works began with the preparation of a concrete slab slightly bigger than the 500m2 aperture of the dish. This slab was designed to provide a stable surface for the assembly of the dish frame jig. For the SG4 prototype, the slab was subsequently re-used as the foundation for the dish itself. The intention for the construction of a commercial dish array, is that a single slab would be established for the jig, in the middle of the intended array, with dish frames then produced in sequence and transported short distances to their individual locations.

The jig is formed of a series of parabolic trusses. These were screwed to the concrete slab and linked together to form a paraboloidal dome. A series of adjustable supports were attached to the truss tops, forming a square pattern in plan view that roughly correlates with the mirror vertices. Photogrametric measurements based on photographs taken from a box suspended from a crane and positioned at locations around and above the jig, allowed accurate determination of support positions. Iterative measurement and adjustment brought the supports to an average error of +- 0.4mm from the true paraboloid.

The dish frame was formed in two stages. Initially a front surface made up of “top hat” cross section steel members running in two directions to form an approximately square mesh, as seen in Figure 3, was positioned on the jig supports and riveted together using a self piecing riveting system. These top hat section members were themselves formed on site using a custom built section rolling machine that rolled them continuously from sheet metal coil stock. This rolling process also imparted a curvature equal to the average radius of curvature of the dish, so that elastic conformance to the jig was obtained with modest hold down forces. The advantage of on site forming using a containerized plant, is that it is not necessary to transport cumbersome long shaped structural members long distances.

The second stage of the process involved the attachment of a series of pyramid forms made from Circular Hollow Section galvanized steel. These pyramids were themselves pre-fabricated using a process of squashing their ends to a structurally optimized taper and welding to plate nodes. Pyramids were attached to span 3 x 3 cells across the surface structure. Once fixed, extra members were used to tie the pyramid vertices together and so form a complete space frame.  The completed dish frame was lifted off the jig using two cranes (100t plus 70t). In this lifting process it was turned over and rested on the ground pending the construction of the base-frame.

With the dish frame complete, the jig was removed for re-use by Wizard Power at another location. A steel Azimuth tracking ring was installed to the slab, a pre-fabricated base-frame installed and the dish frame lifted in and installed to pivots and actuators as shown in Figure 6. The base-frame is formed from three trusses joined to form a triangle. A wheel block at each vertex of the base-frame triangle supports the dish and allows Azimuth movement. The wheel blocks both support the dish and also incorporate engagement with the beam to resist overturning moments in strong winds.

For the prototype, all the mirror panels were fabricated by hand in the ANU workshop. A system of wooden decking across the dish surface allowed personnel to work across the surface safely. Mirror panels were positioned and bonded along two edges to the top hat front surface sections forming the upper most layer of the front surface structure. As each panel was laid, the decking piece under it was subsequently withdrawn for use at another location. Panels were covered with plastic sheets to protect against unwanted reflections during the installation proves.

As the unit is an experimental system maintenance procedures will be developed on an ongoing basis. Some inspection of moving parts is anticipated as well as remediating any damage to paint or corrosion protection. A key on going issue is the regular cleaning of the mirror surface. The intention is to develop an autometd process for this in due course.