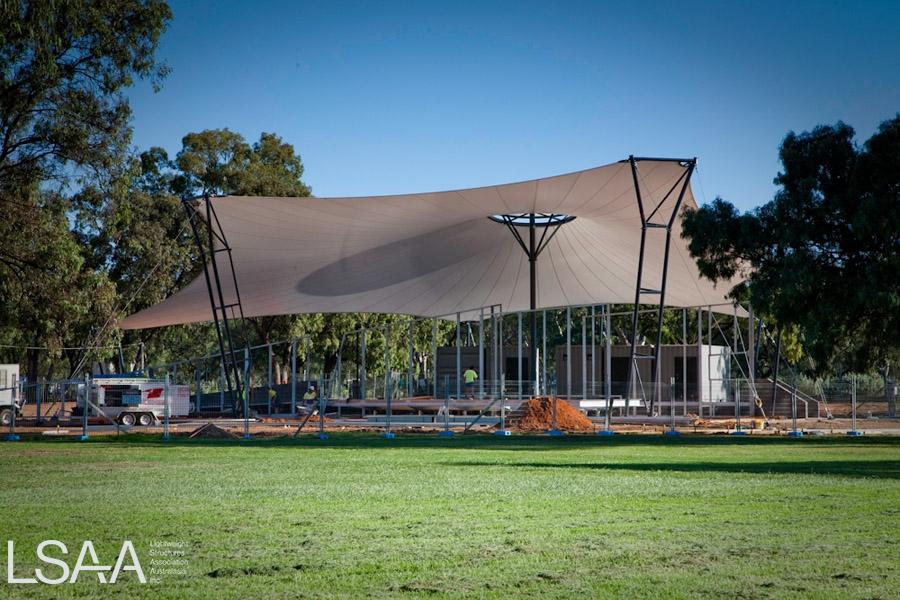 Application: This large PVC structure was created to provide a spectacular shelter from which entertainment of all descriptions can operate under cover in the picturesque environment of the banks of the Murray River in Mildura. 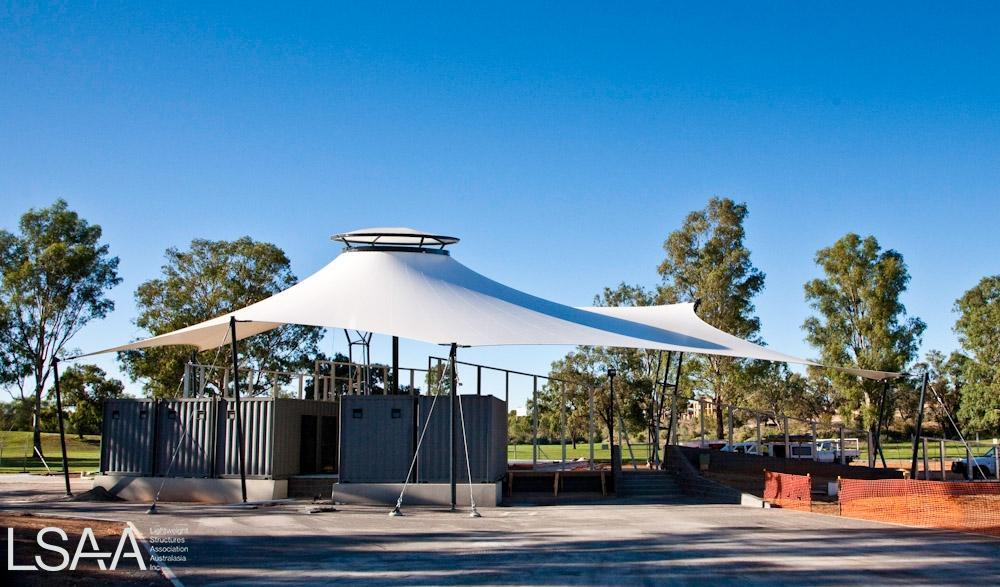 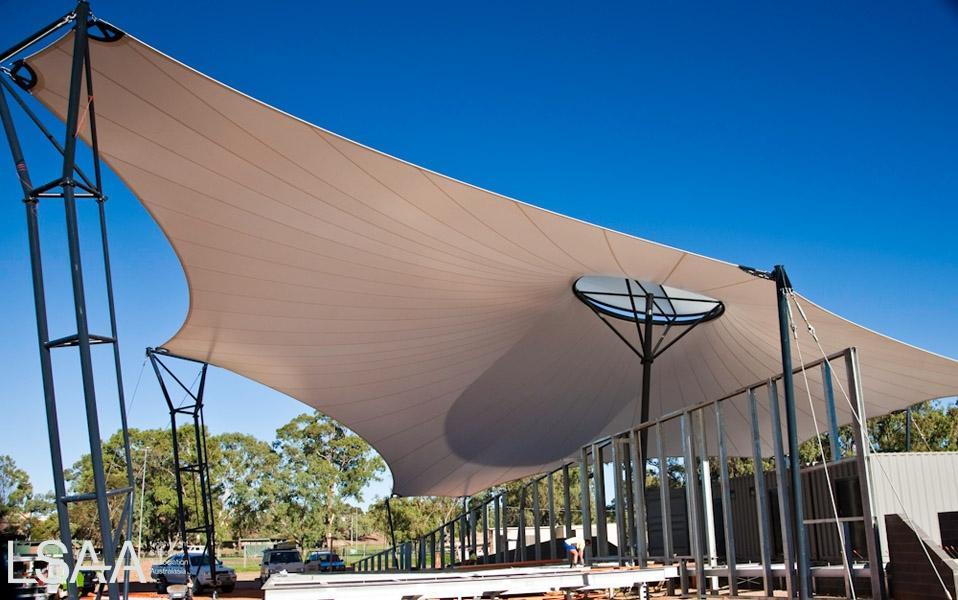 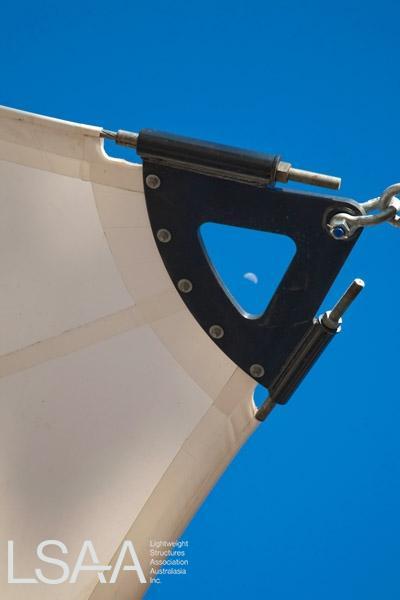 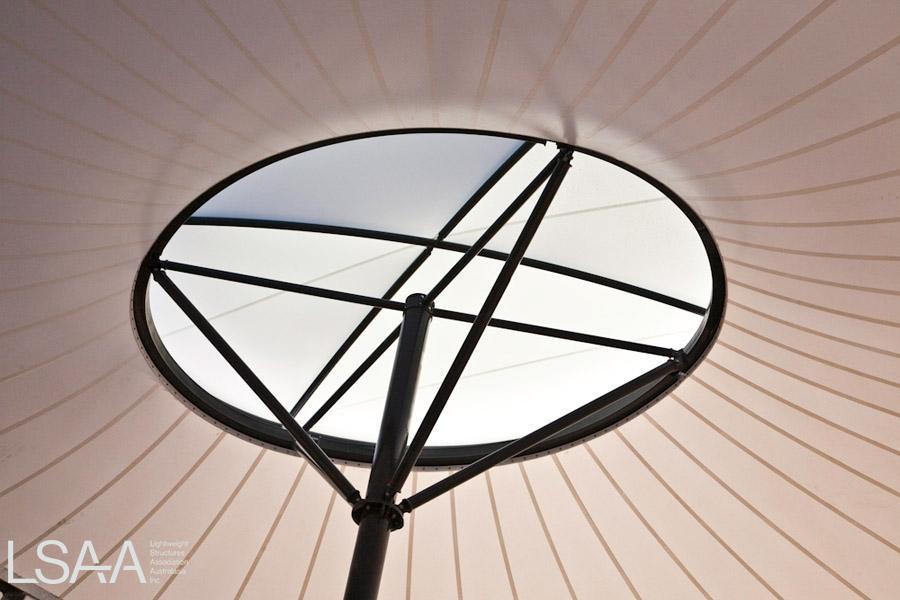 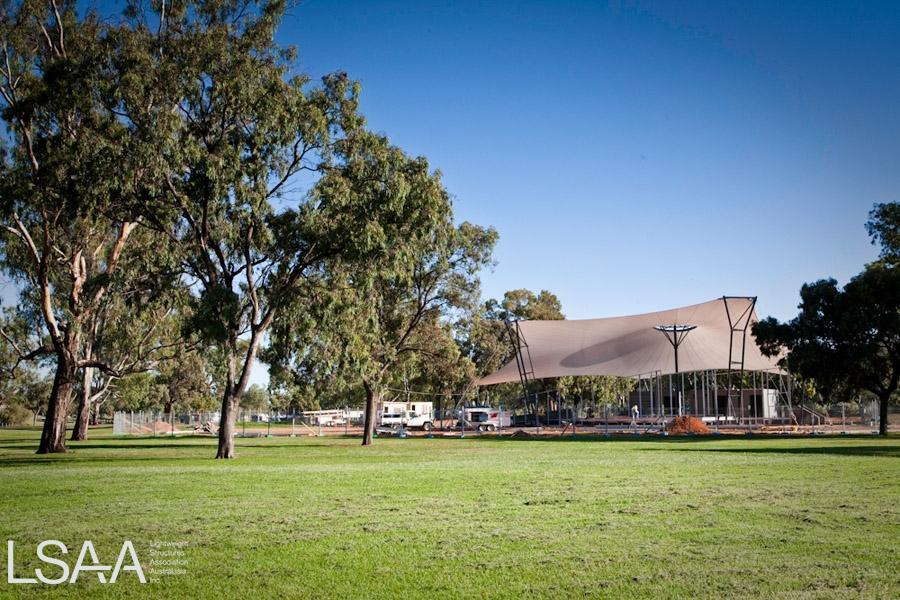 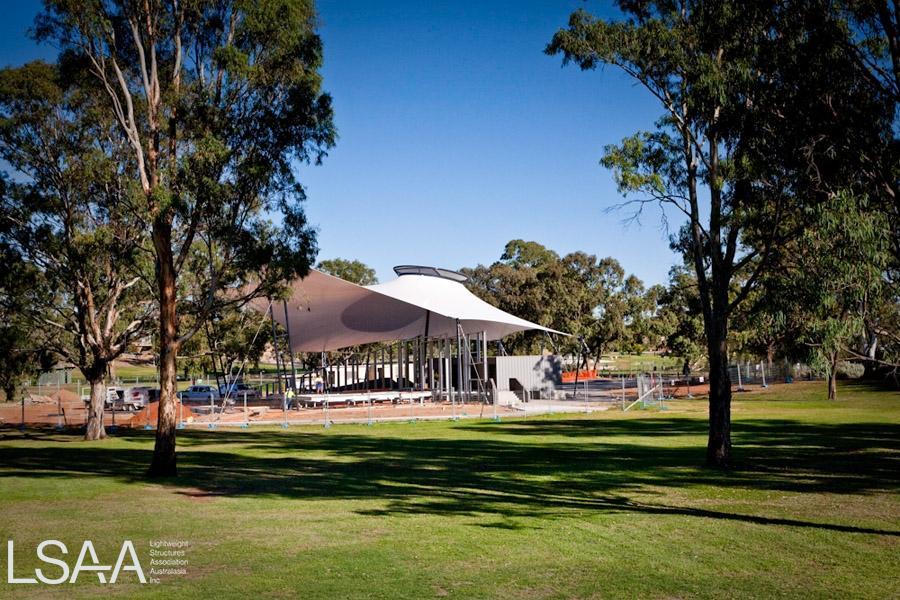 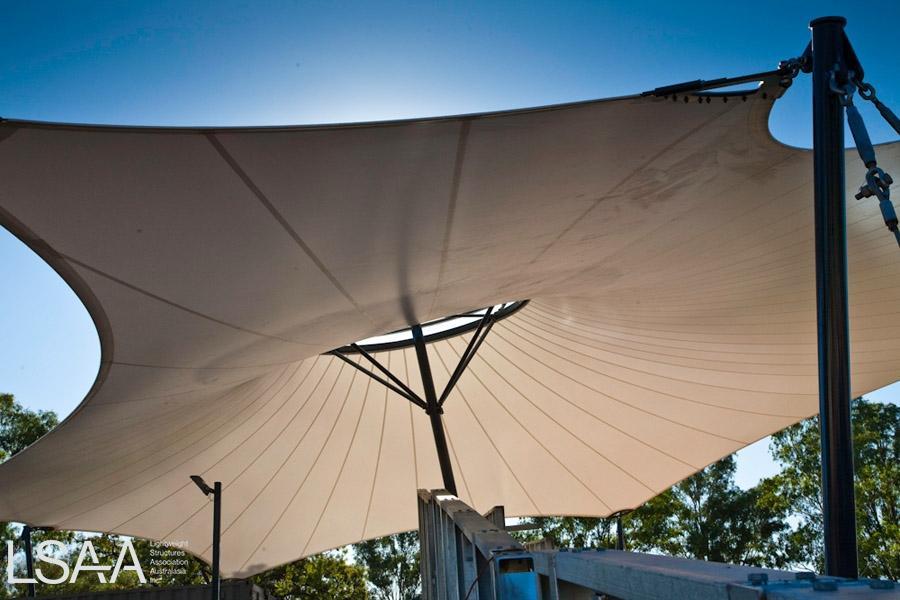 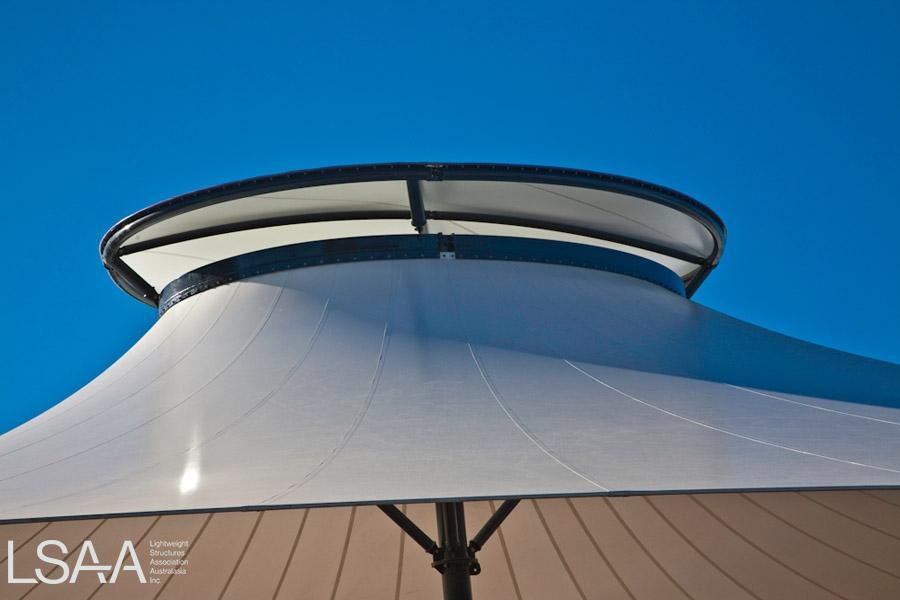 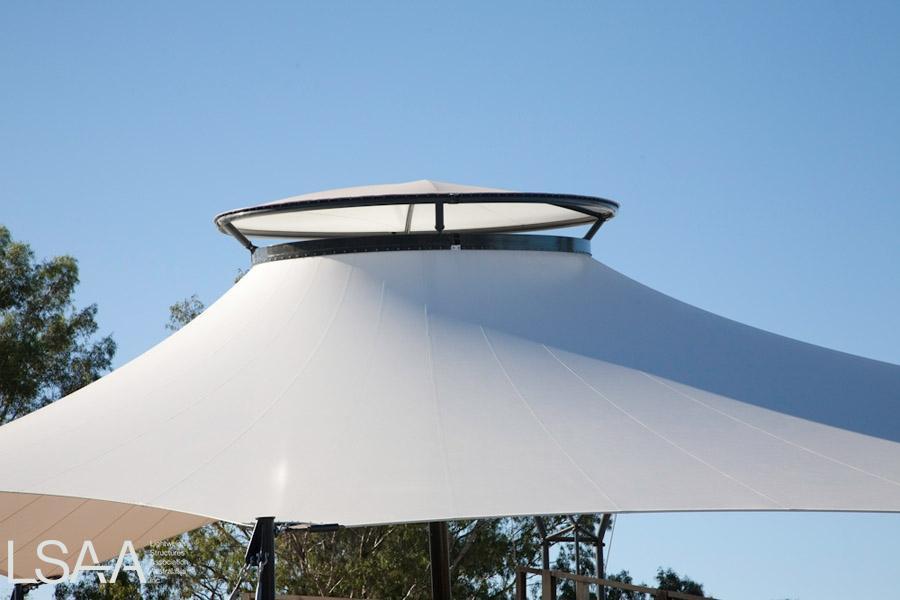 Located in a potential flood zone, the structure has been designed to be dismantled and removed from site within twenty four hours.  The conical structure protrudes its amplifying shape South West onto the lush green slopes of the natural amphitheatre, while covering two large ship containers that house the toilets and other amenities associated for producing a live show.

The architect worked with Oasis and the project engineers, Tensys, to create a shape that functioned as an entertainment platform while its form would inspire awe from both locals and visitors alike.   A major potion of the brief also included the ability of dismantling the structure quickly.  This was created by a series of tieback columns around the perimeter and a central mast and cone.  The two large trusses that front the structure were designed to incorporate the lights, speakers and cables required for any stage production.

Once the fabric shape had been agreed upon, we went to work to try and create an efficient structure as the project was restricted by a very tight budget.  Simple perimeter columns with tieback cables reduced the amount of steelwork dramatically from the original heavy framed proposal.  The project architect then increased (doubled) the size of the top ring beam and cone cap, along with transforming the two front columns into three dimensional trusses.  This increased the cost of the steelwork but the budget was then extended to allow for this variation.

The local builder was responsible for the foundations and holding down bolt cages – Oasis surveyed the HD Bolts to create a three dimensional model of the project.  The geometry of the project became even more complex when the builder commenced the 4m high steel clad wall right through the middle of the site which we had to negotiate.

Oasis chose Hiroaka 212T II PVC fabric for this project due to its high properties, ease to fabricate and long Warranty (15 Years) for the main body of the structure while the top cap fabric was the only structural clear fabric on the market, Hiroaka Sundream SD1800.  This fabric allowed plenty of sunshine into the space below while inhibiting the harmful UV light.

Budget restraints lead the Specification to choose galvanised hardware over stainless steel: Oasis have recently been exposed to some problems on icon projects at the Shell Westgate service stations, Penguin Parade and the more recent Eureka Museum in Ballarat, where the galvanised terminations have been rusting.  Oasis decided to protect the exposed threads of every termination using the Denso Petroleum tape protection system.

The steelwork was supplied and fabricated out of Queensland and freighted to a local paint shop in Mildura.  The steelwork was predominately welded columns although the welded ring beam had some built in tolerances.

The steelwork, fabric and hardware went together flawlessly.

The installation of this structure took place during that horror period of hot weather in early February 2009, where every day went beyond 40 degrees!  The remaining elements of the project (installing services, cladding the framed wall, pouring the suspended slab stage, lighting, sound and landscaping) are expected to be completed by the end of April, 2009.

The complexities of the structure evolved from the pivoting perimeter columns: having to brace these temporarily whilst assembling the fabric, inserting catenary cables and membrane plates under harm environmental conditions was very difficult.  The council hired a large scissor lift to watch the final lift with Chicken and Champagne.

The maintenance of the structure is planned for every six months.

This structure ended up being approximately $393.00 per square metre, with the scope including steelwork, fabric, hardware design, supply and installation.